“It was so scary and unexpected when all of this happened. But when I found Dr. McCormick and NewYork-Presbyterian Och Spine Hospital, I knew this is where I needed to be. From the moment I woke up after surgery and wiggled my toes, I felt so relieved and so happy. I can’t believe I’m feeling so good already.” 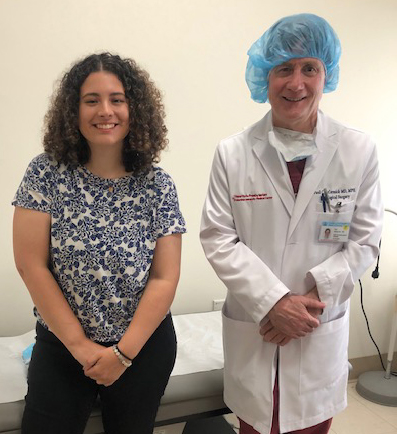 Nicole Zinerco, 30, is an active woman. A graduate program coordinator for a college on Long Island, she plays volleyball and hikes regularly. But in October 2019, she began feeling pain that was making it difficult to do the things she loves.

“I started having pain in my hip, thigh, and pelvis. I had this dull pain in my leg. Walking was uncomfortable, sitting was uncomfortable. I felt like all day; there was a nagging pain. And then I fell a few times — it felt like my leg just gave out on me,” Nicole says. “I thought maybe I had a muscle injury or was sore. But I couldn’t figure out what was causing it. I had never had a health issue before, so it was odd to me that these things just started happening.”

Concerned the pain and other mysterious symptoms may be due to an ovarian cyst, Nicole went to her gynecologist, who ordered abdominal scans to determine what was causing the problem. The imaging showed Nicole had a huge extradural arachnoid cyst at the base of her spine, measuring 5 x 2.3 x 11.3 cm in transverse, which was impinging on the nerves leading to her left leg.

Based on the imaging, her gynecologist referred her to a neurologist who then referred Nicole to a neurosurgeon.

“When I went to the first neurosurgeon, I went in thinking they’d say I had a cyst, but they’d just need to monitor it. But at the appointment, the surgeon told me, ‘You definitely need surgery, but I can’t do it. I’ve never worked on something like this; I wouldn’t feel comfortable operating. It’s not going to be easy to find someone who’s had experience with something like this before,’” the Northport resident recalls. Nicole was devastated but determined to find someone to help her.

MRI of a large extradural arachnoid cyst in the sacral region.

Unsure of where to go for help, she turned to Google. She found several neurosurgeons in the area but none who had experience with this rare cyst. Eventually, one of the doctors recommended she see Dr. Paul McCormick, a neurosurgeon and co-surgeon-in-chief at the NewYork-Presbyterian Och Spine Hospital.

“Walking into that appointment was a night and day difference from my previous experiences. Dr. McCormick told me he does a couple of these surgeries a year and was confident he could remove the cyst,” she says.

After meeting Dr. McCormick in February, Nicole scheduled her surgery for March 23. But Nicole couldn’t go to the hospital for surgery that day, because, on March 19, NewYork-Presbyterian canceled all elective procedures due to COVID-19.

The COVID-19 pandemic disrupted routine hospital services around the world. In New York City, the epicenter of the coronavirus in the US, hospitals like NewYork-Presbyterian Och Spine Hospital chose to prioritize the health and safety of patients and staff and canceled elective procedures, limited the number of hospital visitors, and redeployed physicians to help with those sick with the virus.

For weeks, Dr. McCormick’s staff checked in with Nicole to ensure she was OK and to give an update on when medically necessary, elective procedures would resume. Finally, in May, as the hospital began to emerge from the height of the pandemic, Dr. McCormick’s nurse practitioner reached out to Nicole to reschedule her surgery. 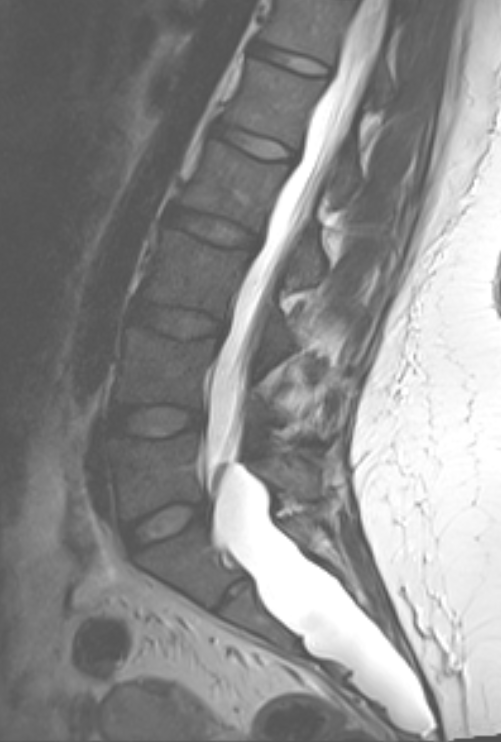 Dr. McCormick performed L5-S2 laminectomy, drainage, and Resection of the arachnoid cyst in the sacral region of Nicole's spine.

Dr. McCormick performed L5-S2 laminectomy, drainage, and Resection of the arachnoid cyst in the sacral region of Nicole's spine.

On May 20, Nicole drove to the NewYork-Presbyterian Och Spine Hospital for her surgery. Due to hospital regulations, her family was unable to go inside with her. Her parents waited in the hospital parking lot to get word from the surgical team about Nicole’s progress. Hearing that her family was in the parking lot, Dr. McCormick went outside after the surgery to meet with them to let them know it was a success.

“Even without my family there, I felt so safe,” she says. “Everyone that I interacted with — the nurses, the PAs, down to the person who brought my meal tray — was so nice. It felt like they were my family.”

Nicole recuperated in the hospital for five days before being discharged. She continues to recover at home and will undergo physical therapy once her incision heals.

“It was so scary and unexpected when all of this happened. But when I found Dr. McCormick and NewYork-Presbyterian Och Spine Hospital, I knew this is where I needed to be,” she says. “From the moment I woke up after surgery and wiggled my toes, I felt so relieved and so happy. I can’t believe I’m feeling so good already.”