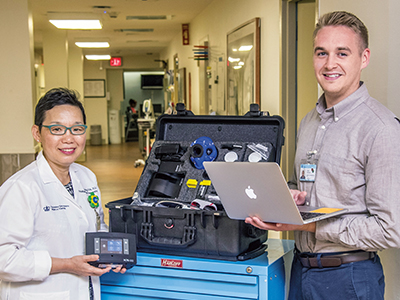 Spasticity in the lower limb is often painful and disabling for children with cerebral palsy and other movement disorders. Leg spasticity makes walking and maintaining balance more difficult in 80 percent of children with the condition. Today, however, with the FDA approval of Dysport® (abobotulinumtoxinA) injection for children ages 2 and older, there is a new therapy that has been shown to effectively improve muscle tone and movement ability.

For more than 20 years, Heakyung Kim, MD, A. David Gurewitsch Professor and Director of Pediatric Physical Medicine and Rehabilitation at NewYork-Presbyterian, has been a proponent of botulinum toxin injection for lower limb spasticity in children with cerebral palsy (CP). “With these injections we’ve seen that the children walk better, faster, and are less tired,” says Dr. Kim, who is currently collaborating with Adam R. Blanchard, MS, ACSM EP-C, an exercise physiologist in the Department of Rehabilitation and Regenerative Medicine at NewYork-Presbyterian/Columbia University Irving Medical Center, on a pilot study to determine the efficacy of a Single Event, Multilevel Chemoneurolysis (SEMLC) with Dysport.

The Columbia study follows a 2016 phase 3 clinical trial of Dysport conducted in children and teens ages 2 to 17 that showed improvement in walking and balance, decreased falling and tripping, and increased endurance.

“In our study we’re aiming to see if this botulinum toxin is improving balance control and gait and saving energy expenditure while the children are walking,” says Dr. Kim, who is the Principal Investigator. The single site investigation is seeking to recruit 12 to 16 children diagnosed with diplegic cerebral palsy, ages 5 to 17, who can walk independently with or without assistive devices.

“Most procedures for botulinum toxin injections to the lower limbs target a limited number of muscles,” says Dr. Kim. “My treatment approach is to do Single Event Multilevel Chemo-neurolysis [SEMLC], which is a multilevel injection, including not only the major muscle groups, but also including small groups, in a single treatment session. This could include anywhere from 15 to 25 injections in one session.”

“A previous study involved administering this drug in a single muscle group in the gastrocnemius or the soleus,” says Mr. Blanchard. “The areas of Dr. Kim’s injections are selected on an individual basis. One child might have spasticity in three muscles, and another child may have spasticity in different muscles. We try to tackle each point of their spasticity in their lower limbs.”

“The gait analysis is performed using a gait map with sensors laid out on the floor,” explains Mr. Blanchard. “It records data such as speed and where their foot falls on the map. During walking the child wears a mask that records oxygen consumption [VO2] and how heavy he or she is breathing. Our hypothesis is that their oxygen consumption is going to be higher at baseline, but lower following injections and that this drug will make it easier for them to walk.”

Mr. Blanchard notes that the VO2 equipment used is novel as well. “It is a mobile device so we are able to use it while the patients walk in a hallway. This is more natural than walking on a treadmill or riding a stationary bike, which for some of these children can be very difficult. We can also do it right in the clinic.”

At a four-week follow-up and again at three months post-injections, patients are retested with a six-minute walk with submaximal or walking oxygen consumption, gait analysis, and repeat the quality-of-life questionnaire and measurement scales for spasticity.

“The medication takes time to work; the great outcomes start to appear two to four weeks after the injections and can last up to three to four months,” says Dr. Kim.

Another goal is to not only improve function, but also maintain current function. “If we don’t control muscle stiffness with botulinum toxin or with orthopedic surgery and/or physical therapy, a certain percentage of children with CP who were once able to walk will no longer be able to walk by their teenage years,” says Dr. Kim.

“We see such a decrease in function as these children grow into adulthood,” adds Mr. Blanchard. “Hopefully, we’ll be able to combat that. By improving their oxygen consumption, they can walk easier, participate in more physical activity, and be out in the community more often.”

“This approach promises real benefits for children with CP,” says Dr. Kim. “Many times, when we recommend botulinum toxin injection, parents are afraid it will make their child weak or lose energy. I want to demonstrate through this study that the botulinum toxin will help the children to walk better and give them more energy. If this pilot study goes well, we will expand it to a multicenter trial.”