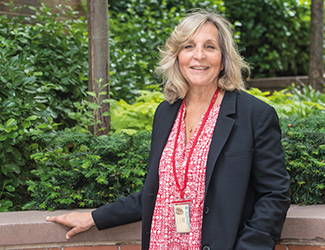 Suicide rates have been rising in nearly every state, and in 2016, nearly 45,000 Americans died by suicide according to the Centers for Disease Control and Prevention. Indeed, the recent publicity surrounding celebrity suicides has drawn greater attention to this growing public health crisis. “As someone who has worked in the field of suicide prevention for so long and has seen so many suicidal people, it is still heartbreaking every time I hear someone has died by suicide,” says Barbara H. Stanley, PhD, Professor of Medical Psychology in the Department of Psychiatry at Columbia University Irving Medical Center, and Research Scientist in Molecular Imaging and Neuropathology at the New York State Psychiatric Institute.

“If you look at the 10 leading causes of death over the last two decades, all have either gone down in their rates or, at worst, stayed the same — except for suicide, which has increased dramatically,” says Dr. Stanley. “We don’t yet have a handle on why this is occurring. The only thing that we can say is that whatever treatments we have, up to this point, are either not fully disseminated or are imperfect in their capacity to help people. Also, there is a large number of people who are not within the healthcare system. We need to find better ways to identify people at risk and provide better services to help them cope with the multiple issues that can lead to suicide.”

“As someone who has worked in the field of suicide prevention for so long and has seen so many suicidal people, it is still heartbreaking every time I hear someone has died by suicide.”

Throughout her career, Dr. Stanley has done just that, serving as Principal Investigator on several National Institute of Mental Health and foundation grants studying clinical and neurobiological factors and intervention strategies related to suicidal behavior. Her work ranges from basic and neuroscience research to implementation science, the study of methods to promote the integration of research findings and evidence into healthcare policy and practice.

“Earlier thinking in the field was that suicidal behavior only occurs in the context of a particular disorder — like depression or bipolar disorder — and when you treat the disorder, the suicidality goes away,” says Dr. Stanley. “The newer thinking is that there are specific deficits that are related to suicidal behavior, above and beyond the primary diagnosis. To that end, we’ve been examining the underlying neurobiology of suicidal behavior. But that has only gotten us partway there.”

As a member of the Conte Translational Neuroscience Center for the Study of Antecedents of Suicidal Behavior at Columbia, Dr. Stanley joins a team of clinicians and scientists who are pursuing investigations into brain functioning to understand the causes of suicidal behavior. One of Dr. Stanley’s projects focuses on the role of suicidal subtypes.

“Predicting who will engage in suicidal behavior remains challenging,” says Dr. Stanley. To help ascertain suicidal risk, she collaborated on a smartphone app that “pings” the phones of patients six times a day over the course of a week to ask them to rate their level of suicidality.

“These graphs are quite dramatic,” says Dr. Stanley. “For some people, suicidal ideation is a bit elevated and constantly flattened. And then there are others where it looks like a sawtooth pattern throughout the week. I started thinking, are there important differences associated with patterns of suicidal thinking? Does the biology associated with these patterns differ?”

In a study published in the August 2017 issue of Molecular Psychiatry, Dr. Stanley and Columbia researchers hypothesized that the pattern of suicidal thinking helps distinguish at least two suicidal subtypes. “We examined the cortisol response and found that people who were more stress responsive as indicated by a greater cortisol response to a psychosocial stress test, Trier Social Stress Test (TSST), were more likely to respond to minor stressors in their lives with an increase in suicidal ideation. These individuals report sudden increases in suicidal thoughts following stressful life events. With this pattern of suicidal thinking they are at higher risk of less planned suicidal behavior and limiting access to means might be particularly important for them.”

“We found that individuals exhibiting a lower stress response were more likely to report persistent thoughts of suicide. We think this pattern is linked to depressive affect and is more likely to result in more carefully planned suicidal behavior,” says Dr. Stanley. “In addition to being one of the criteria for diagnosing major depression, statistical modeling suggests that major depressive episodes play a role in the development of suicidal thinking.”

While the investigators have described two suicidal subtypes that reflect different patterns of suicidal thinking and stress responsivity, they suspect there are others. “These patterns might overlap or change over time in the same way that psychological and physiological responses to stress alter over the lifespan,” says Dr. Stanley.

In another study published in the April 2018 issue of the Journal of Affective Disorders, Dr. Stanley and her colleagues studied 35 individuals with major depressive disorder and 23 healthy volunteers, aged 18 to 65 years old, using the TSST; salivary cortisol was measured at six time-points before and during the test. The researchers found that the participants with brief suicidal ideation had greater cortisol response compared to those with longer/continuous ideation and healthy volunteers, even after controlling for relevant covariates. They concluded that hyper-responsiveness of hypothalamic-pituitary-adrenal (HPA)-axis to social stress is associated with brief suicidal ideation, possibly defining a pathway for further exploring the biological subtyping of suicidal individuals.

As a clinical psychologist, Dr. Stanley has created psychosocial interventions for suicide prevention, including the Safety Planning Intervention, which she developed with Gregory K. Brown, PhD, Director of the Center for the Prevention of Suicide at the University of Pennsylvania. The Safety Planning Intervention, a prioritized list of coping strategies and resources for reducing suicide risk, was originally used by the researchers in a treatment study of suicidal adolescents as a way to keep them safe until they received cognitive behavior therapy.

“We thought of it as a management technique, and it turned out that, in and of itself, it is a very powerful intervention,” says Dr. Stanley. “The Safety Plan is just that — an emergency plan for a suicidal person. We know from studies that suicidal feelings come and go, and the urge can dissipate. While suicide risk may last a few months, the actual time that a person plans a suicide attempt before acting is quite brief — often a few minutes to an hour. The Safety Plan helps people recognize when they are entering this danger zone and provides ways to deescalate and prevent a suicide attempt. The Safety Plan gives them something else to do instead of engaging in suicidal behavior.”

The Safety Planning Intervention is now being used with the Veterans Administration, on crisis hotlines, and in emergency rooms, outpatient clinics, and inpatient units throughout the world.

Dr. Stanley and her Columbia colleagues are also participating in the NIMH Zero Suicide initiative to prevent suicide attempts and deaths among individuals receiving treatment within healthcare systems. “Throughout New York State, we are implementing a set of strategies in some 200 outpatient clinics,” says Dr. Stanley. “The aspirational goal is that if a patient is in our healthcare system, we should be able to detect and treat their suicidality and prevent suicide. Our project is designed to help outpatient providers improve their care of suicidal patients.”