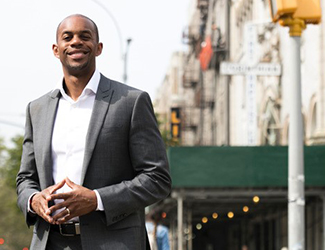 Dr. Sidney Hankerson’s passion for community-based interventions draws on personal experiences and NIH-funded studies focused on reducing race-based health disparities in the United States. The Baptist Church that Dr. Hankerson regularly attended growing up — where his father served as a deacon and his mother played piano for the children’s choir — was a second family to him. “I was raised in Fredericksburg, Virginia, where my church was a hub of educational, social, and civic engagement. We were a tight-knit community that helped people tackle familial challenges and supported one’s spiritual growth,” says Dr. Hankerson.

After completing undergraduate studies at the University of Virginia, Dr. Hankerson enrolled at Emory University School of Medicine. He did most of his clinical training at Grady Memorial Hospital, a large public hospital system, which he calls “the Harlem Hospital of the South.” Fueled by his perception of multiple barriers to quality mental health services at Grady, Dr. Hankerson obtained a dual MD/MBA at Emory to understand how to translate best practices from business into research and clinical care.

“It’s often countercultural for us to be talking about mental health in the church, but it’s a great opportunity to reach people who need help.”

Dr. Hankerson came to Columbia in 2009 after receiving a competitive NIMH-funded research fellowship. Myrna M. Weissman, PhD, the Diane Goldman Kemper Family Professor of Epidemiology and Psychiatry at Columbia University, Vagelos College of Physicians and Surgeons, and Chief of the Division of Translational Epidemiology at the New York State Psychiatric Institute, served as Dr. Hankerson’s mentor. “Sydney was interested in disparities in health care, so we talked and I said, ‘Everybody knows there are disparities. Let’s do something about it.’ Together we designed studies and received funding from the Brain and Behavior Foundation [formerly NARSAD] and several other grants to pursue them.”

Dr. Hankerson studied how community-based interventions could address factors such as lack of access to care, financial constraints, stigma, and distrust of health care professionals that contribute to African-Americans’ low depression treatment rates. “When I first arrived at Columbia, I attended several community meetings with Dr. Williams, gave free mental health workshops, and talked to numerous community leaders,” says Dr. Hankerson. “I conducted several focus groups with pastors, who described depression as a ‘silent killer’ in the black community.”

Indeed, recent data from the Department of Health and Mental Hygiene show that major depression is the No. 1 cause of disability in New York City, but many people refuse to seek depression care. “The pastors’ insights caused me to pursue their role in mental health care more in-depth.” A landmark national study found that more people contact clergy first for mental health problems compared with psychiatrists, psychologists, or general medical doctors.

“Our clergy are trusted,” says Dr. Hankerson. And yet, faith communities are often ill-equipped to address the needs of members struggling with depression and other mental health illnesses. “The notion that people of faith don’t get depressed or struggle with other mental health problems creates tremendous tension that we have to work through. It’s often countercultural for us to be talking about mental health in the church, but it’s a great opportunity to reach people who need help.”

For example, Dr. Hankerson found high rates of depression (20 percent) via a depression screening study among congregants at three black churches in New York City. The study was the first of its kind, and Dr. Hankerson was invited to the White House twice in 2016 to discuss the results and his community-based program.

Dr. Hankerson is delivering the evidence-based, eight-hour Mental Health First Aid training in Harlem’s First Corinthian Baptist Church and other trusted community venues. His program draws on the strong social ties within communities of faith and the credibility of clergy to combat the stigma of mental health troubles. He seeks to build connections among congregants and healthcare providers.

“Churches have addressed the emotional needs of their congregations for years,” says Dr. Hankerson. Mental Health First Aid, which is available in English and Spanish, trains faith leaders — pastors, imams, deacons, and other clergy — and Harlem community members to assess and support someone experiencing a mental health crisis. Participants learn to detect signs and symptoms of depression and other mental illnesses, and the program provides a five-step action plan for connecting people to appropriate support.

Perhaps most importantly, programs like Mental Health First Aid housed with the Wellness Center will address a long-standing obstacle preventing access to appropriate health care among African- Americans — mistrust of mainstream medical science and health care in general. “We know that people of color — African-Americans and Latinos — are disproportionately affected by high blood pressure, diabetes, depression, anxiety, stroke, and other chronic medical conditions,” says Dr. Hankerson. “The Wellness Center provides an amazing opportunity for the development of new partnerships with scientists, physicians, psychologists, and, most importantly, among members of the West Harlem community. We will identify how we can provide the best care, delivered in a culturally sensitive way, and how we can positively impact the lives of people in West Harlem.”

“People love Sydney because he’s clearheaded and he has a mission, but he also wants to involve the science,” says Dr. Weissman, who is working with Dr. Hankerson on implementing a similar program for the New York City Department of Health and Mental Hygiene. “He’s very articulate, very responsive, and has really earned the trust of the community.”

Adapted from “Going Outside the Four Walls,” by Sharon Tregaskis, published in Columbia Medicine, 2017 Annual Report