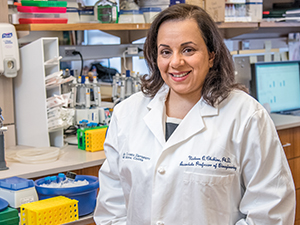 Degenerative disc disease is one of the most common causes of back pain and sciatica, and most people over the age of 30 already have some degree though they may not show symptoms for many years. “Unlike osteoarthritis and other aging-related degenerative diseases, spine changes tend to start at a younger age,” says Nadeen O. Chahine, PhD, Associate Professor of Bioengineering in Orthopedic Surgery and Biomedical Engineering at Columbia University. “Degenerative disc disease creates a socioeconomic burden because it affects people in their prime adulthood when they are pursuing careers and raising families.”

Dr. Chahine’s research looks at degeneration and regeneration of the intervertebral disc, applying tools of bioengineering, cell and tissue biomechanics, and animal physiology to study the function of the disc and disc cells, emphasizing degradation processes and inflammation.

“One area that my lab has been working on is the repair and regeneration of the intervertebral discs, trying to understand causes of degeneration and whether or not the current treatment paradigm is sufficient for patients’ needs,” says Dr. Chahine. “Currently, surgical approaches include spinal fusion, which does a good job in removing the source of pain, but there are associated complications. The literature has shown that over time when you fuse one level of the spine it changes the overall biomechanical dynamics of the spine. Now you have adjacent discs that are seeing an abnormal mechanical environment and they begin to degenerate as well. That phenomenon — adjacent segment degeneration — can occur anywhere along the spine.”

“My lab has been working on understanding causes of degeneration and whether or not the current treatment paradigm is sufficient for patients’ needs.”

To address this complication, Dr. Chahine is investigating treatment paradigms and approaches that do not require fusion, but can maintain some physiological level of mechanical loading in a repaired disc that provides pain relief and also maintains the integrity of the spine and affected disc. Using newer technologies, including 3D printing, Dr. Chahine and her team are seeking to construct scaffolds and materials that are more in line with the native mechanical properties of the human disc.

“In the tissue engineering world, the approach has been to create a biomaterial with cellular elements from the patient’s body,” she says. “There have been several experiments combining chemical and mechanical factors to regenerate a replacement disc, but with limited success. Some growth happens, but the quality of the tissue, from a mechanical point of view, is far inferior to the mechanical needs of the human body.”

Exploring an Alternative to the Classical Approach

“The disc itself is not a homogeneous material, but rather a composite of at least three different materials that have three different ultrastructures and mechanical function,” says Dr. Chahine. “The central part of the tissue is the gelatinous nucleus pulposus that provides hydrostatic pressure support. The fluid in the disc is very important to its mechanical function. The outer part — the annulus fibrosus — is a dense collagenous tissue that provides integrity and prevents the tissue from expanding in the horizontal direction when you apply loading in the vertical direction.” 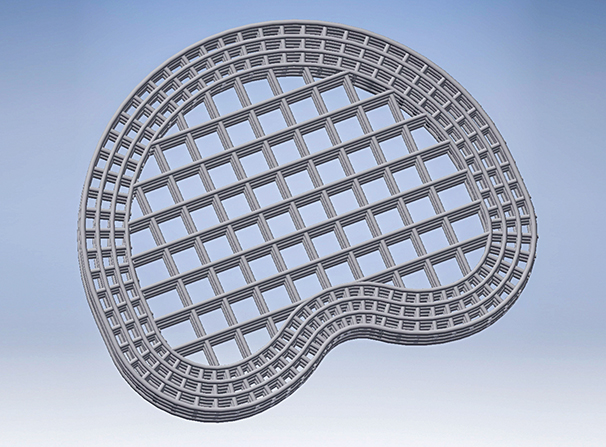 Dr. Chahine is pursuing an alternative to the classical tissue engineering approach of rebuilding tissue from the ground up, as she describes it, but rather devising more novel materials and ways to combine materials together to form a scaffold that has mechanical integrity similar to native tissue.

“Perhaps we can produce a replacement that’s either based out of a mechanically viable replacement, like polymer, or maybe add cells back into it and still go with the tissue engineering approach,” she says. “We’ve been taking a novel polymer biomaterial and using a formulation that makes it viscoelastic, a kind of rubber-like material that exhibits the mechanical behavior of biological tissues. The amount of deformation that you have in the material depends on the rate that you stretch it or push on it — unlike materials such as plastics — which would not have that kind of capability.”

According to Dr. Chahine, by taking different polymers and optimizing the conditions in which the researchers can print them in a 3D configuration, they can reproduce the mechanical properties that represent the nucleus pulposus and the annulus fibrosus. “We’re still in the developmental bench phase of this work,” she says. “We’ve been validating the mechanical properties of all of the parameters that go into making the disc material, optimizing those conditions, and have found the ones that are going to match the native properties well. We’ve also created models that simulate a human disc.”

Dr. Chahine and her team have established that the material is biocompatible through their testing of cells. “We don’t expect there to be any complications with toxicity when putting this material in the body,” she says. “The next step is to test this tissue in an animal model or through in vivo studies to evaluate the responses to implanting it in the body.”

While Dr. Chahine’s research focus is aimed at reproducing the properties in the mechanical behavior and anatomical configurations associated with the lumbar spine, she notes there are commonalities with the cervical spine. “Perhaps some of these approaches could apply to all levels,” she says. “It would just require different configuring.”