Validating an MRI Measure of Pathology in Alzheimer’s Disease 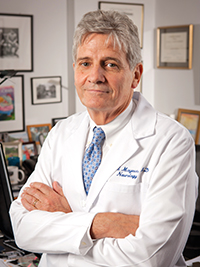 Researchers in the Department of Neurology and the Taub Institute for Research on Alzheimer’s Disease and the Aging Brain at Columbia University Irving Medical Center have developed a quantitative MRI measure that reflects the joint contributions of neurodegeneration, brain infarcts, and white matter hyperintensities (WMH) to the clinical and pathologic diagnosis of late onset Alzheimer’s disease (LOAD). WMH is presumed to be an indication of small vessel cerebrovascular pathology.

“The quantitative MRI measure was derived from the Washington Heights-Inwood Columbia Aging Project cohort by linearly combining individual cerebrovascular and neurodegenerative factors weighted by their association with episodic memory,” according to Adam Brickman, PhD, Associate Professor of Neurological Sciences in the Taub Institute.

The Washington Heights-Inwood Columbia Aging Project, which is a prospective, community-based longitudinal study of aging and dementia in northern Manhattan, provided individuals recruited from Medicare recipients in three waves — 1992, 1999, and 2009 — who were followed every 18 to 24 months. Structural MRI scans were acquired in 1,333 participants of which 1,175 met the following criteria for participation:

The researchers forward applied the score to independent samples and performed further validation by demonstrating its association with neuropathology at autopsy, clinically proven LOAD biomarkers, and conversion from mild cognitive impairment to LOAD.

The investigators noted that “because the MRI measure comprised neurodegenerative changes such as cortical thinning and hippocampal atrophy — well-validated MRI biomarkers for LOAD — it is not surprising that it correlated with memory and measures of pathologic findings in LOAD.” The study further indicated that the “MRI measure was also associated with both LOAD neuropathology and related PET and cerebrospinal fluid biological markers, an important validation step.”

The results of the study, which were published in the October 9, 2018, issue of Neurology, with an accompanying editorial, confirm and augment the role of both neurodegeneration and cerebrovascular pathology in LOAD and suggest the possibility of capturing both in a single valid and reliable MRI-based measure that can be used for clinical purposes and potentially for research.