Dr. Zev Williams with the handheld DNA sequencer that his team has engineered to enable rapid genetic testing.

The Columbia University Fertility Center in the Department of Obstetrics and Gynecology at NewYork-Presbyterian/Columbia University Irving Medical Center is one of the largest, longest-standing, and most successful fertility centers in the U.S. Here, an interdisciplinary team of physicians and support staff provide medical and emotional support for patients, achieving success rates that meet or exceed the highest national standards in fertility care.

In the past year, the Center has continued to build on its comprehensive program with the appointment in April 2017 of Zev Williams, MD, PhD, a nationally recognized clinician and researcher in recurrent pregnancy loss and infertility, as Chief of the Division of Reproductive Endocrinology and Fertility, and Director of the Columbia University Fertility Center, and the construction of a new, state-of-the-art fertility center that will be opening in April 2018.

Dr. Williams has a rich educational background and experience in the field of reproductive endocrinology and infertility. After earning his PhD and MD at the Mount Sinai Medical School of New York University, he pursued residency training at Brigham and Women’s Hospital/Massachusetts General Hospital at Harvard Medical School. He completed fellowship training in reproductive endocrinology and infertility at NewYork-Presbyterian/Weill Cornell Medical Center. Prior to joining Columbia, Dr. Williams served as Director of the Program for Early and Recurrent Pregnancy Loss at Albert Einstein College of Medicine, where in addition to developing the clinical care program, he also established a robust basic and translational research agenda.

Dr. Williams’ particular expertise focuses on women who have recurrent pregnancy loss. “These are women who often can get pregnant quite easily on their own, but who have miscarriages over and over again,” he says. “It is a heartbreaking emotional roller coaster for these women and couples. Miscarriage itself is actually very common and is by far the most common complication of pregnancy. About 20 percent of all pregnancies end in a miscarriage, and one to two percent of all women attempting to conceive will have three or more losses.”

According to Dr. Williams, at least 60 percent of first and second miscarriages are due to aneuploidy, the presence of an abnormal number of chromosomes. “This number is far higher if you include very early pregnancy losses. In these cases, the miscarriage is actually the result of the mother’s body correctly recognizing that this pregnancy will not result in a healthy baby and stopping the pregnancy,” notes Dr. Williams. “Many conditions can result in a miscarriage, for example, anatomical defects of the uterus, thyroid problems, insulin resistance/diabetes, and thrombophilia. Our work involves carefully working with the patient to systematically look at all the factors that have to go right in order for a pregnancy to succeed and try to identify where there is a problem and where I can help.”

Dr. Williams’ clinical expertise is complemented by his active involvement in research, with several federally funded projects currently underway in the area of aneuploidy, including the development of better methods for its diagnosis. “Traditionally, testing to determine fetal aneuploidy was not performed on pregnancy tissue until after the third miscarriage, as it was considered likely that aneuploidy was the cause of a first or second miscarriage,” explains Dr. Williams. “I disagree with this position. In my experience, and confirmed in larger studies, miscarriage is often associated with a tremendous sense of guilt; women and their partners will often blame themselves for the loss and will carry this emotional pain with them. Testing for aneuploidy after a first or second loss is important because in cases where the tissue was aneuploid, it provides a sense of closure to the woman and reassurance that the loss was not her fault. Conversely, when the genetic testing shows no abnormality, it allows evaluation for other causes of miscarriage, treatment to be started sooner, and, hopefully, prevent the next pregnancy from ending in a miscarriage.”

As part of NIH R01 and U19 grants, Dr. Williams’ team and colleagues at Rockefeller University are pursuing investigations in the use of placental circulating RNA as a non-invasive screening tool for diseases and complications of pregnancy to enable early intervention and to provide insights into disease pathogenesis. They are also doing single-cell RNA analysis to determine the cellular composition of the human placenta and have developed and patented an automated method for purifying high-quantity and high-quality RNA and DNA from circulation. 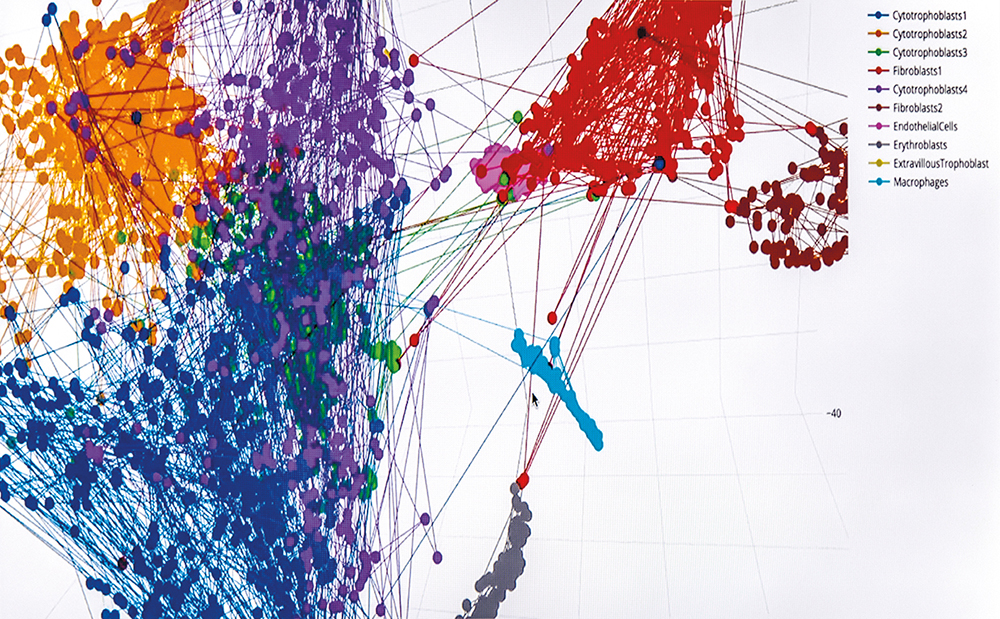 Single-cell RNA sequencing identifies the cells, some never before seen, that comprise the human placenta.
Click the image to enlarge

Innovative approaches being developed at the Columbia University Fertility Center and the Williams Lab are also making treatment easier and providing greater options for women. For example, a new IVF stimulation protocol, Columbia Oral IVF (CORAL-IVF), enables women to go through an IVF cycle needing only a single injection, as opposed to the standard approach that often requires as many as 30 injections. In cases of miscarriage, Dr. Williams and his co-investigators developed a method for ultra-rapid and low-cost testing of miscarriage tissue for chromosomal abnormalities using a hand-held DNA sequencer. “In effect, we are applying the newest DNA sequencing technologies to shed light on one of the most ancient afflictions — miscarriage,” says Dr. Williams.

Reflecting on his role as the leader of the Columbia University Fertility Center, Dr. Williams explains, “Our entire team of outstanding clinicians, embryologists, nurses, scientists, and staff members is committed to helping patients realize their dreams of building a family and bringing life into the world. Not only do we take a patient-centered approach that provides extraordinarily individualized care, but we are developing and pioneering novel treatments and technologies not available anywhere else in the world so that we can revolutionize reproductive medicine with the ultimate goal of helping those for whom the standard approaches failed.”

“I am delighted that Zev Williams is leading and growing our infertility program,” says Mary D’Alton, MD, Director of Services at NewYork-Presbyterian Sloane Hospital for Women and Chair of the Department of Obstetrics and Gynecology at Columbia University Irving Medical Center. “Dr. Williams represents all of the pillars of academic medicine — as a superb clinician, an educator, and an innovative NIH-funded investigator.”