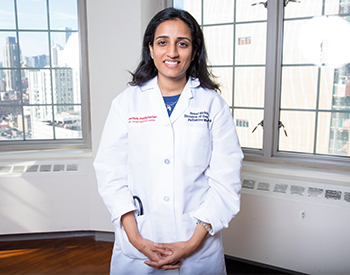 Every January, Sonal Mehta, MD, a geriatrician in the Division of Geriatrics and Palliative Medicine at NewYork-Presbyterian/Weill Cornell, reviews her personal, research, and scholarly goals for the coming year. “In 2018, I marked 10 years as a clinician at Weill Cornell and I was thinking more globally,” says Dr. Mehta.

Growing up, Dr. Mehta spent summers in India visiting her grandparents and family members. “I have always had a connection there. Over the past several years, family and friends in India began reaching out to me to ask about the care of older relatives. Then my grandmother became sick last year, and I talked to my father about how to care for her and we discussed procedures and so on.”

In another instance, Dr. Mehta’s uncle contacted her about his mother who lives in a village in India. “She had diabetes and peripheral vascular disease,” says Dr. Mehta. “The question came up about either amputating her leg or proceeding with palliative care. We talked about the risks and benefits of the procedure, her quality of life, and what her care needs would be after surgery. We thought through the decision both medically and socially. And that’s really what the root of geriatrics is all about; it’s about connecting the medical piece and the psychosocial piece. All of these conversations prompted me to explore geriatric care in India.”

“Ideally, I hope that my work can be a stepping stone for increased recognition for geriatric and palliative care education within the Indian medical education system and ultimately translate to improved clinical care for the growing population of older adults in India.”

Dr. Mehta discussed her growing interest in the care of older adults in India with Mark S. Lachs, MD, MPH, Co-Chief of Geriatrics and Palliative Medicine, who suggested that she take some time away from Weill Cornell to explore it further. With his encouragement and guidance, she applied for and received a Fulbright-Nehru Fellowship to pursue a four-month project in geriatric palliative care medicine in Pune, India, two hours from Mumbai. “I studied abroad in Pune in college and have extended family there,” notes Dr. Mehta. “I have also been back to visit three times in the past 15 years. It’s a growing city.”

In 2011, adults over the age of 60 accounted for 8 percent of India’s total population; by 2050, it is estimated to increase to 19 percent, or 323 million older adults. In 2010, the government of India launched the National Programme for Health Care of the Elderly to improve patient care for older adults within an institutional healthcare system.

“My understanding of the medical system in India is that it’s very privatized,” says Dr. Mehta. “An illness can be financially devastating for patients and their families. In my experience, older adults have generally been cared for by their family members. But I’ve seen a change in the society where both men and women are now working, increasing the need for geriatric medicine — a new concept in India.”

During her fellowship from July to November 2019, Dr. Mehta is collaborating with the Janaseva Foundation, which supports vulnerable populations in rural and urban settings. In 2016, the Janaseva Foundation, which is recognized by the World Health Organization, the United Nations, and the Government of India, created a Regional Resource Training Center to address knowledge, skills, and attitudinal gaps in caring for the elderly. Dr. Mehta’s work in Pune involves meeting with geriatric medical providers to learn more about their health systems across various settings, interacting with physicians, nurses, physical therapists, and social workers. She is also implementing geriatric palliative care education for these interdisciplinary providers and giving presentations at a variety of institutions on related topics while gaining international expertise in the field of palliative care.

Dr. Mehta is accompanied by her parents and her son Soham, 11, and daughter Sia, 9. “For several months we planned for this adventure together,” she says. “Fingers crossed that they will have an experience of a lifetime,” she says.

In between her schedule of presentations and workshops, Dr. Mehta is posting her experiences along with photos on a blog at sonalsfulbright.com. “This work has the potential to transform into a train-the-trainers model,” says Dr. Mehta.

“Ideally, I hope that my work can be a stepping stone for increased recognition for geriatric and palliative care education within the Indian medical education system and ultimately translate to improved clinical care for the growing population of older adults in India.”