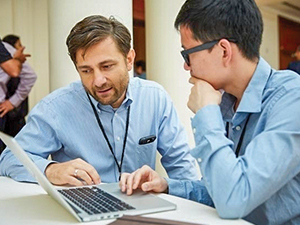 According to researchers at Weill Cornell Medicine, common drug treatments that lead to changes in gut fungi can persistently exacerbate allergic airway diseases such as asthma. In a study published online November 29, 2018 in Cell Host & Microbe, the investigators suggest that the enormous modern prevalence of allergic airway diseases may be attributable in part to the widespread use of antimicrobials, including antifungals and other therapies that disrupt the normal balance between bacterial and fungal species in the gut.

“We were able to identify gut-resident immune cells that sense fungal community imbalance in the intestines and transmit these immune signals to the lung contributing to aggravated allergy,” says senior study author Iliyan D. Iliev, PhD, Assistant Professor of Immunology in Medicine in the Division of Gastroenterology and Hepatology and a researcher in the Jill Roberts Institute for Research in Inflammatory Bowel Disease at Weill Cornell Medicine.

“We were able to identify gut-resident immune cells that sense fungal community imbalance in the intestines and transmit these immune signals to the lung contributing to aggravated allergy.”

Scientists have learned in recent years that disruptions of intestinal bacteria, for example, due to antibiotic overuse, can trigger or worsen immunologic diseases within the gut and even elsewhere in the body. Dr. Iliev and colleagues reported in 2016 that disruptions of gut-resident fungal communities can have a similar effect, worsening intestinal inflammation as well as allergic airway disease in mice. The disruption of gut-resident fungi, also known as fungal dysbiosis, may be a widespread public health problem.

The use of antifungal drugs is now so common, for example, in modern agriculture or to treat patients with compromised immune systems, that the U.S. Centers for Disease Control and Prevention has expressed concern over rising drug-resistance among fungal species. Antibiotic drugs are also widely used and can affect gut fungal populations by removing or promoting gut bacteria that co-exist with the fungi.

In the new study, Dr. Iliev and his team demonstrated that several weeks of treatment with the antifungal drug, fluconazole, which leads to the overgrowth of drug-resistant fungal strains in the gut, exacerbates asthma-like allergic response in mice to house dust mites, a classic airway allergen. The scientists also demonstrated that this effect was persistent, showing up even three weeks after they had terminated the fluconazole treatment.

By contrast, mice bred without any gut fungi showed no exacerbation of airway allergy when treated with fluconazole, demonstrating that the effect was indeed mediated by fungi. The allergy exacerbation immediately manifested, however, when the scientists transplanted a dysbiotic population of gut fungi into these formerly fungi-free mice.

In a study earlier in 2018, Dr. Iliev and colleagues showed that a certain type of white blood cell, the CX3CR1+ mononuclear phagocyte, is the immune system’s chief fungi-sensing representative in the gut. The scientists in the new study found that this same cell type mediates the gut-to-airway effect of fluconazole treatment in mice. When depleting the CX3CR1+ phagocytes from the rodents’ intestines or blocking key signaling molecules, these cells activate after sensing fungi, largely reversing the worsening of the allergic response to house dust mites.

Dr. Iliev and first author Xin Li, PhD, a postdoctoral associate in medicine at Weill Cornell Medicine, now hope to find a method to target CX3CR1+ phagocytes or the molecules they produce so that it might someday be useful clinically to alleviate diseases related to fungal dysbiosis.

“It’s a challenge,” says Dr. Iliev, “because these phagocytes are needed to sense and engulf fungi, bacteria, and food antigens. We’ll need to find a way to modulate their responses to specific organisms reversibly, and only during specific conditions.”