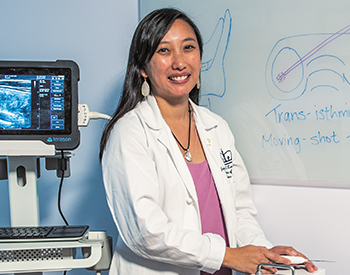 Ultrasound-Guided Radiofrequency Ablation   Ultrasound-guided radiofrequency ablation (RFA) treats specific types of benign thyroid nodules and lymph nodes with recurrent cancer. “RFA is best used in cases of cancers where surgery is not ideal or for symptomatic benign thyroid nodules,” says Dr. Kuo. “It involves ultrasound-guided placement of an electrode into the thyroid nodules. The electrode has an active tip that emits radiofrequency waves that allow us to burn the tissue we’re targeting in a very controlled manner. It’s similar to an ultrasound-guided fine needle biopsy. The procedure can be performed in an outpatient setting very safely. Patients are able to avoid general anesthesia and surgery, and there is no scar.” 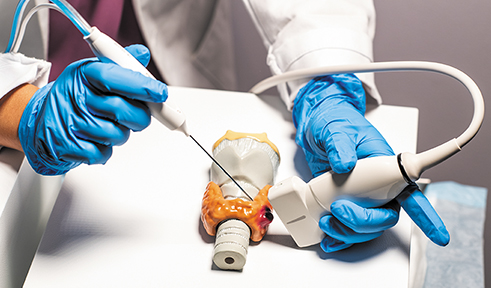 Ultrasound-Guided Ethanol Ablation   This procedure uses high-resolution ultrasound to guide the injection of a small amount of ethanol into a thyroid nodule or lymph node. The ethanol causes an inflammatory response that leads to very targeted destruction of the nodule or node. “This approach has been very successful for treating cystic thyroid nodules, since simple cysts are almost never cancer and partially cystic nodules with no suspicious features have a less than 3 percent risk of malignancy,” says Dr. Kuo.