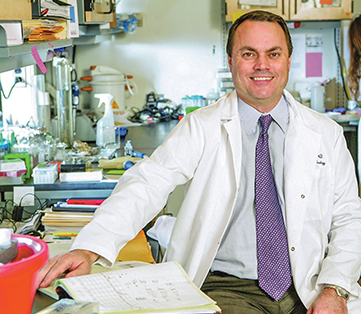 The NCI’s Outstanding Investigator Awards were created to support leaders in cancer research who are developing applications that may lead to major breakthroughs. Each award recipient is given $600,000 per year for seven years to fund their research. Drs. Lyden and Melnick are two of 20 researchers around the country who received Outstanding Investigator Awards this year.

Dr. Lyden’s research is aimed at understanding metastasis. His first major discovery was a microenvironment — pre-metastatic niche, or PMN — that tumors induce in distant organs that is favorable to the survival of tumor cells before their arrival at the site. “This emphasizes that cancer metastasis is not a late event as previously thought,” says Dr. Lyden, who is a member of the Sandra and Edward Meyer Cancer Center and the Gale and Ira Drukier Institute for Children’s Health at Weill Cornell Medicine. 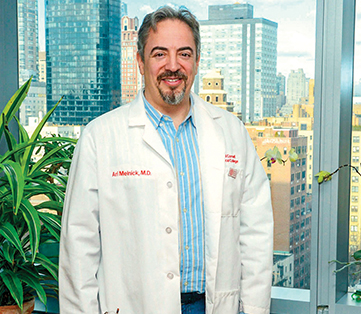 Dr. Lyden and his team have illuminated the role of exosomes, which are comprised of tumor-derived nanoparticles, in metastatic disease progression and their contribution to creating biological conditions that are favorable to metastasis at distant organs. They found exosomes have specific molecules packaged within, including double-stranded DNA that represents the entire genome of the tumor cell of origin. “This is helpful in monitoring response to therapy and predicting the progression of cancer in patients,” says Dr. Lyden, who is also a pediatric oncologist at NewYork-Presbyterian/Weill Cornell Medical Center.

Most recently, Dr. Lyden’s group adapted a new technology, asymmetric-flow field-flow fractionation, to isolate exosome subpopulations and discovered novel, but even more prominent exomeres, which are secreted by tumor cells.

“This award can be a real game-changer. It allows us to explore new directions and further investigate the metastatic evolution of cancer,” says Dr. Lyden. “We also hope to conduct patient-related studies on a larger scale and develop new technologies to help identify molecular changes that occur in the pre-metastatic environment.”

In his research, Dr. Melnick focuses on deciphering at a basic level how B-cells — which should in theory protect the body from cancer by producing antibodies — can transform into cancer itself. It’s known that with lymphoma, it’s the proteins that interact with the genome that are mutated. These proteins are analogous to the software of the cell because they are responsible for writing instructions on DNA — the hard drive — that control how genes are expressed.

“Our preliminary results suggest a major perturbation in the software that involves changing the instructions that control how B-cells in the immune system can cross-talk with other immune cells,” says Dr. Melnick, who is also a member of the Meyer Cancer Center at Weill Cornell Medicine. “But we don’t know how that leads to cells behaving like cancer cells, and we don’t know the impact on the rest of the immune system. So that’s what we’re interested in studying.”

As a next step, Dr. Melnick and his team plan on using cutting-edge genomic technologies to explore the changes affecting the readout of genetic instructions. He is also interested in developing drugs that can restore the correct instructions in immune cells to regain control and fight against the transformed cancer cells.

“It’s an honor to be considered worthy of getting an award from the National Cancer Institute,” Dr. Melnick says. “It’s very competitive so it is gratifying that they appreciate the kind of work coming out of our group.”