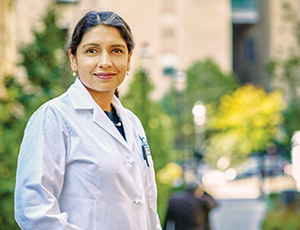 In October 2017, Roshni Rao, MD, joined NewYork-Presbyterian/Columbia University Medical Center, as Chief of Breast Surgery in the Comprehensive Breast Center. In her new role, Dr. Rao collaborates closely with the Breast Center’s team of specialists across every discipline, including radiology, medical oncology, radiation oncology, and plastic surgery. The Comprehensive Breast Center is part of the NCI-designated Herbert Irving Comprehensive Cancer Center at Columbia. Dr. Rao previously served as Director of the George N. Peters Center for Breast Surgery at the University of Texas Southwestern Medical Center in Dallas, Texas. She completed her Breast Surgery Fellowship training at the University of Texas MD Anderson Cancer Center.

A Novel Approach to Nipple-Sparing Mastectomy

“When performing a mastectomy, we have to know the anatomic borders going up to the clavicle, and then to the latissimus muscle, and then to the lateral border of the sternum,” says Dr. Rao. “Covering that amount of area through such a small incision is technically more challenging. Using cameras that have traditionally been used for laparoscopic surgery allow us to better visualize the planes between the breast and the muscle and between the breast and the skin,” says Dr. Rao. “The visualization with the video-endoscopic approach allows us to push the envelope, if you will, and still be able to do the operation that’s oncologically correct. We are able to remove 99 percent of the tissue to preserve the cosmesis and still be able to see what we need to see. It is obviously much safer for the patient and offers a less noticeable scar with excellent cosmetic outcomes.”

Understanding Unusual Disparities in the Development of TNBC

Triple-negative breast cancer (TNBC) is aggressive and therapeutically challenging, and is more likely to be seen in African American and Hispanic populations, as well as in women who are BRCA1 gene carriers. Dr. Rao wants to know why. To that end, she has been exploring genetic ancestry testing through mitochondrial DNA (mtDNA), which is distinct from nuclear DNA as it is maternally inherited and allows for origin determination. Dr. Rao conducted one of the first studies of self-described African American, White, and Hispanic patients with TNBC to identify mtDNA patterns, the findings of which were published in the January 2017 issue of Cancer.

“The results were very interesting,” says Dr. Rao. “We found a 27 percent rate in the Hispanic group of what I call discordance, where patients thought they were of one ethnicity, but their mitochondrial DNA actually demonstrated something different, and 13 percent discordance in the entire group. Many of the Hispanic patients had African American ancestry that they weren’t aware of and, in fact, some of them had Ashkenazi Jewish ancestry.”

Dr. Rao concluded that the identification of mtDNA patterns with a predisposition toward TNBC may allow for risk stratification and that further studies that identify the impact of variation in mtDNA and its association with TNBC would assist in personalizing risk assessment, allowing for the potential development of ethnically tailored therapeutic interventions.

The mtDNA analysis of African American patients with TNBC revealed the majority to be of either Nigerian, Cameroon, or Sierra Leone ancestry, with one discordance indicating haplogroup B, which is generally indicative of Native American or Hispanic ancestry.

“Obviously, individuals have different side effects from different types of chemotherapies,” continues Dr. Rao, “but part of the focus of this research also seeks to predict who is going to do better with chemotherapy versus a different agent. Research supports the fact that if you use a taxane-based agent, which is a very specific, very commonly used type of chemotherapy in breast cancer, it is more likely that African American patients will get neuropathy. So, if you have someone who has African American ancestry that they may not know about, then perhaps we need to change the agents that we’re using to minimize their long-term side effects.”

A Role for Exercise in Treatment

In another investigation, Dr. Rao is exploring the role of exercise during chemotherapy. Patients undergoing neoadjuvant chemotherapy are traditionally directed to rest during treatment. Dr. Rao has hypothesized that since breast cancer is linked to obesity, perhaps losing weight and exercising might have a positive impact on tumor biology.

“People always ask me why rates of breast cancer are going up. One reason is the obesity epidemic,” says Dr. Rao. “When I was working in Texas, before joining NewYork-Presbyterian, I wanted to get in better shape, so I signed up for an hour-long ‘boot camp’ class three times a week,” says Dr. Rao. “After a month, I felt great, and I ended up collaborating with a personal trainer to set up a study to see if exercise could make a difference in overweight breast cancer patients who were undergoing chemotherapy.”

In a pilot study of 10 patients with stage 2-3 breast cancer, estrogen and progesterone receptor positive, with a BMI >25, five patients were randomized to standard neoadjuvant chemotherapy plus a supervised intensive exercise regimen and five received chemotherapy alone.

“In the exercise group, we had patients work with a trainer three times a week, then compared them with the second group, which received chemotherapy but didn’t exercise,” says Dr. Rao. “The patients who worked out not only lost weight, their tumors shrunk more quickly and were less aggressive. I want to take this research to the next level here at the Herbert Irving Comprehensive Cancer Center by seeing how exercise might help breast cancer patients get through chemotherapy more easily, with less nausea and fatigue.”

As a breast surgeon, Dr. Rao likens her role as the quarterback of the patient’s healthcare team. “Patients see me as the starting point of their treatment, as well as their advocate,” she says. “Cancer treatment can be harsh; chemotherapy can affect the health of a patient’s heart down the line, as well as her long-term survivorship. At the Herbert Irving Comprehensive Cancer Center, the focus is on total patient care, which is why I’m so honored and excited to be at Columbia. Women going through breast cancer are very motivated to get better, and I plan on continuing to build upon the tradition here of helping them survive and to thrive.”