Regulating Metabolism in the Setting of Cancer 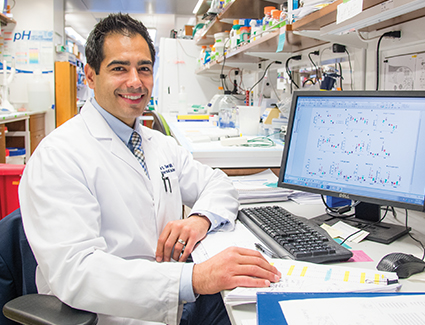 In 2018, physician-scientist Marcus DaSilva Goncalves, MD, PhD, joined the Division of Endocrinology at NewYork-Presbyterian/Weill Cornell Medical Center following a four-year research fellowship in endocrinology in the laboratory of Lewis C. Cantley, PhD, Meyer Director of the Sandra and Edward Meyer Cancer Center at Weill Cornell Medicine. Throughout his 15-year career, Dr. Goncalves has studied muscle loss during critical illness, basic mechanisms of skeletal muscle growth and metabolism, insulin signaling, and developing new radiologic methods to assess skeletal muscle quality and function. Now with the establishment of the Goncalves Lab at Weill Cornell, he will continue to pursue basic science investigations into the interactions between the endocrine system and cancer. “Our mission is to better understand the hormones, cytokines, and metabolites that regulate systemic metabolism in the setting of cancer, and how these factors are changed with dietary interventions,” says Dr. Goncalves, who has received funding from the Lung Cancer Research Foundation and a National Cancer Institute Career Development Award. The lab is currently focused on two main investigations: cachexia syndrome and how diet affects cancer metabolism.

By some estimates, nearly one-third of cancer deaths can be attributed to cachexia, a wasting syndrome characterized by a dramatic loss of skeletal muscle mass and often accompanied by significant weight loss. Cachexia occurs in many cancers, usually in the advanced stages of the disease, and is most commonly seen in pancreatic and gastric cancer, as well as lung, esophageal, colorectal, and head and neck cancer.

“Cachexia syndrome causes patients to waste away and die of frailty and immobility,” says Dr. Goncalves. “The etiology of cachexia is completely unclear and there is no therapy. Cachexia affects a huge population of patients, and anything we can do to address this syndrome would make a big difference in a patient’s quality of life while undergoing cancer treatment.”

According to Dr. Goncalves, half of all patients with cancer experience cachexia at some phase in their therapy. “At the time of death, it’s probably closer to 80 percent and 20 to 30 percent of patients die from the wasting syndrome only. Those numbers for death are probably an underestimate because most patients get referred to hospice and the cause of death is really unknown.”

As part of their research into this devastating and debilitating condition, Dr. Goncalves has developed a mouse model that recapitulates the cachexia syndrome as they seek interventions — either dietary or metabolic — to help prevent muscle wasting and fat loss. Concurrently, they are conducting a retrospective study of the medical records of patients with lung cancer at Memorial Sloan Kettering Cancer Center and at Weill Cornell to determine how much muscle they lose over time.

“We can measure their skeletal muscle from their routine imaging studies, including CT scans and PET scans, which give us a lot of muscle data,” says Dr. Goncalves. “Then we see if the patient was on a drug that has helped them over time. One drug that has come up in our studies in mice is fenofibrate, which is usually given for high triglyceride levels, a liver disorder associated with obesity. We have found that if we give it to mice with cachexia it prevents them from losing muscle mass. We’re now looking in the charts of patients that have been on that drug. Did they do better or worse? We think we have a small signal there, but we’re still working on the data.”

Dr. Goncalves is in the planning stage for an observational trial of patients with lung cancer. “We’ll be collecting blood samples and measuring the skeletal muscle of these patients, who we will follow over time to observe the metabolic changes that occur when they develop cachexia. Then the goal is to have an intervention trial where patients are actually given a therapy.”

The researchers are also studying how diet affects cancer metabo-lism, using both mouse models and patient studies. “In a mouse model of colorectal cancer, we found that when you give those mice high amounts of sugar in the form of high fructose corn syrup the tumors get much bigger,” says Dr. Goncalves. Identifying the metabolism of the tumors that change in the setting of both glucose and fructose, the researchers have been able to block that growth by modifying fructose metabolism.

“In patients with endometrial cancer, we are giving them the opposite — low sugar, ketogenic diets — to see if that helps prevent the tumor from growing rapidly,” says Dr. Goncalves, who chose endometrial cancer to target because of its high rate of PI3-kinase mutations. “That is a central node in the way insulin signals in all tissues of the body and is partly the reason I became interested in this project. As endocrinologists, we deal with insulin sensitivity in the skeletal muscle and in the liver. If you can block PI3-kinase signaling in the tumor, you block PI3-kinase signaling in all tissues of the body and you develop an insulin resistance similar to type 2 diabetes. Blocking that rise in insulin may prevent some of the complications that develop during cancer therapy. Similarly, I think we will eventually find that there are other mutations in metabolic pathways that predispose the tumor to be fast growing and modulate this growth by looking at fructose and changing the diet accordingly.”

Dr. Goncalves has long focused on how the body regulates food intake. “There are well-characterized pathways that are altered in obesity and regulate hormones such as leptin and insulin that control the hunger pathways in the brain,” he says. “With cachexia those pathways are rewired in the opposite way — patients no longer have the sense of hunger or the way they taste or perceive food has changed.”

As Dr. Goncalves explains, a number of inflammatory cytokines and hormones that control appetite are deranged in the setting of cancer. “Some of those are the glucocorticoids and inflammatory cytokines, for example, the IL-6 superfamily and a new cytokine, GDF15, which is increased in many chronic states, especially cancer. GDF15 has been shown to directly activate pathways in the brain that suppress appetite. There are now antibodies that block GDF15 and lead to an increase in appetite.”

Dr. Goncalves is in discussions with industry to acquire a version of that antibody to test in his cachexia mouse model. “I think this discovery is a big leap forward in the cachexia field,” he says. “Recently, several papers have highlighted significant benefits of blocking GDF15 in cancer models of cachexia.”

Dr. Goncalves agrees that depending on the tumor and treatment, a wide array of problems can affect gut motility, taste sensation, and the hunger system. “It is so medically complex that you have to address each component from a medical perspective.” To that end, Dr. Goncalves is collaborating with Weill Cornell colleagues in Geriatrics, Palliative Medicine, and Rehabilitation Medicine to establish a comprehensive care model to help patients with cachexia.

“Patients will receive both dietary and exercise information, as well as a hormone evaluation, all in one visit,” he says. “There are not many clinics in the northeast that specifically serve cachexia. By providing supportive care, hormone evaluation, and vitamin and protein supplements, we hope that patients will eat a little more so that they can tolerate the therapy that will hopefully cure the cancer.”