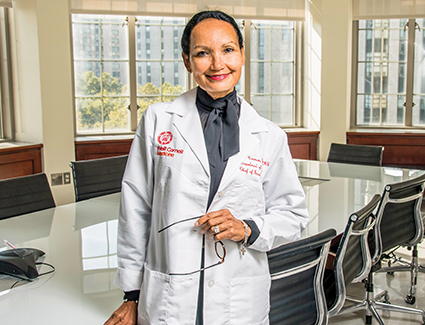 “Our goal is to provide a multidisciplinary approach to breast cancer treatment through a standardized clinic and tumor board system implemented in each hospital so that patients receive the same high quality care with optimized experiences and outcomes,” says Dr. Newman, who joined NewYork-Presbyterian from the multi-hospital Henry Ford Health System in Michigan, where she was Director of its Breast Oncology Program. “In a country renowned for the strength of its multicultural and multiracial population, metropolitan New York is truly the epicenter of this beautiful diversity. Our NewYork-Presbyterian and Weill Cornell Medicine clinical and research teams are therefore uniquely poised to characterize biologic, genetic, environmental, and cultural influences on health — information that enhances our efforts to provide personalized care to our patients.”

A Researcher Focused on Scientific Disparities

Dr. Newman has long investigated how and why breast cancer risk and disease outcomes vary by race and ethnicity. She is particularly focused on the genetics of aggressive breast tumors, including triple-negative breast cancer. It is also one of the reasons she chose to specialize in breast cancer.

“I became interested in disparities in breast cancer dating back to the first phase of my professional career as a general surgeon in the SUNY Downstate system,” says Dr. Newman. “My practice was based in Brooklyn Heights, and in caring for the extremely diverse communities of Brooklyn, it was quite concerning to see stark differences in breast cancer presentation and outcome between our African American and white American patients.”

As Dr. Newman explains, her black patients with breast cancer tended to be younger at diagnosis and have a worse outcome. “Back in the early 1990s, we didn’t have as many insights regarding the heterogeneity of breast cancer as a disease compared to where we are today in an era of precision medicine and understanding variations in breast tumor biology,” she says. “It was commonly assumed that outcome disparities were completely explained by socioeconomic disadvantages that are more prevalent in the African American community. Socioeconomics and healthcare access are clearly important in health outcomes, but characteristics such as the younger age distribution suggested that additional factors were also contributing to breast cancer disparities.”

Observing these differences prompted Dr. Newman to refocus her career so that she could address disparities “in a more scientific fashion,” and she went on to pursue a surgical oncology fellowship at the MD Anderson Cancer Center in Houston, followed by joining their faculty with a practice dedicated to managing breast cancer. “As the years progressed, we developed a greater understanding of the biology of breast cancer,” she says. “We have learned to identify particular patterns of tumors that tend to be more aggressive than others, including a subset known as triple-negative breast cancer.”

“Triple-negative breast cancers are inherently more challenging because they possess greater metastatic potential and because we don’t have targeted therapies for these tumors,” continues Dr. Newman. “Tumors that are positive for hormone receptors — the estrogen receptor and/or the progesterone receptor — are cases where we can rely upon a variety of hormonally active cancer-fighting treatments that are very effective in eliminating the threat of metastasis and cancer progression. For cancers that overexpress a different marker called HER2/neu, we have other special medical therapies designed to target the HER2/neu protein. But we can’t use any of those targeted therapies for the triple-negative breast cancers.”

A champion of global health, Dr. Newman has spent the last 15 years training physicians and working with patients in developing countries. She is the founding Medical Director for the International Center for the Study of Breast Cancer Subtypes, a collaboration among multiple hospitals in the United States, Africa, and the Caribbean. In addition to studying breast cancer incidence across the world and conducting research to identify the genetic origins of triple-negative breast cancer and determine why it disproportionately affects young women as well as women of African descent, the Center provides medical supplies and training opportunities to its partners.

Dr. Newman refers to the colonial-era slave trade as further hypothesis-generating evidence regarding the presence of an association between African ancestry and triple-negative breast cancer risk. “We see very high frequencies of triple-negative breast cancer in countries such as Ghana, located in western sub-Saharan Africa. In contrast, we have seen low rates of triple-negative disease in the east African country of Ethiopia. African Americans tend to have more shared ancestry with Ghanaians compared to Ethiopians because the trans-Atlantic slave trade brought western sub-Saharan Africans over to the colonies. Our research suggests that this shared ancestry may also be linked to particular inflammatory patterns that can influence breast cancer risk. Characterizing these genetic patterns will be important in understanding breast cancer disparities in the United States, and it can lead to important insights regarding a type of breast cancer that is particularly dangerous to women regardless of where they live in the world.”

Dr. Newman has held leadership positions on several national committees, including the Center for Disease Control’s Advisory Committee on Breast Cancer in Young Women, the National Institutes of Health’s Clinical Trials Advisory Committee, and the National Institute on Minority Health and Disparities’Advisory Council. Dr. Newman holds Adjunct Professorships at the MD Anderson Cancer Center, as well as the University of Michigan, where she previously served as Breast Center Director for 13 years.

“While we’ve made wonderful advances in breast cancer, this disease continues to cause far too much pain and suffering,” adds Dr. Newman. “We are obligated to identify all of the features that account for variation in our ability to detect and control breast cancers.”