Dr. Joseph J. Fins, an internationally renowned medical ethicist and pioneer in the field of neuroethics and disorders of consciousness, was named the first recipient of a newly established professorship — The E. William Davis Jr., M.D. Professor of Medical Ethics at Weill Cornell Medical College. 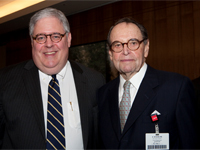 Dr. Fins serves as chief of the Division of Medical Ethics and tenured professor of medicine, professor of public health, and professor of medicine in psychiatry. He is also director of medical ethics and a physician at NewYork-Presbyterian Hospital/Weill Cornell Medical Center. His current scholarly interests include ethical and policy issues in brain injury and disorders of consciousness, palliative care, research ethics in neurology and psychiatry, medical education and methods of ethics case consultation. He is a co-author of the 2007 Nature paper describing the first use of deep brain stimulation in the minimally conscious state.

The Davis Professorship was created in honor of Dr. E. William Davis Jr., who was instrumental in the founding of NewYork-Presbyterian/Weill Cornell's Ethics Committee in 1994, when Dr. Fins was named as its founding chair. Dr. Davis served as professor of obstetrics and gynecology at Weill Cornell Medical College and is currently vice president for medical affairs emeritus at NewYork-Presbyterian.

"Starting out as a practicing internist, and with Dr. Davis as a mentor, Joe's career has bridged medicine and humanity," says Dr. Antonio M. Gotto Jr., the Stephen and Suzanne Weiss Dean of Weill Cornell Medical College. "As the chief of our Division of Medical Ethics, and the founding chair of the Hospital's Ethics Committee, Dr. Fins has served as our counsel and our conscience."

Dr. Herbert Pardes, president and CEO of NewYork-Presbyterian Hospital, says, "As physicians, we understand the need sometimes to approach difficult decisions removed from our emotions so that we can render the best care for our patients and counsel their families. We must never, however, disconnect ourselves and our decisions from our humanity. Dr. Fins has built a career here on researching, practicing and helping us all practice an irreplaceable level of humanity as we guide our patients and their families down difficult paths."

"It is truly a singular honor having a professorship named in honor of Dr. Davis, a person who is especially beloved at the medical center for his dignified manner and discernment," Dr. Fins says. "Words cannot express how deeply touched I am to carry Dr. Davis' work forward. I know I will forever be inspired when I think of our relationship and this very high honor. I'm especially delighted to hold a professorship that bridges the Hospital and the Medical College in the service of our patients."

Dr. Fins serves as president-elect of the American Society for Bioethics & Humanities and is former governor of the American College of Physicians and Trustee of Wesleyan University. He is a fellow of the Hastings Center and The New York Academy of Medicine. His most recent book is "A Palliative Ethic of Care: Clinical Wisdom at Life's End" (Jones and Bartlett, 2006).

Dr. Fins' distinguished career has been punctuated by major accomplishments and accolades. He has won more than 20 competitive grants, such as a Robert Wood Johnson Foundation Investigator Award in Health Policy Research, a Soros Open Society Institute Project on Death in America Faculty Scholars Award, and a Woodrow Wilson National Fellowship Foundation Visiting Fellowship. He was appointed by President Clinton to The White House Commission on Complementary and Alternative Medicine Policy and currently serves on The New York State Task Force on Life and the Law by gubernatorial appointment. In 2010, Dr. Fins was elected to the Institute of Medicine of the National Academies, one of the highest honors in medicine.