Newly Discovered Antibody May Be Body's Natural Defense Against Alzheimer's, Other Neurological Diseases

In an important advance in the battle against Alzheimer's disease, physician-scientists at NewYork-Presbyterian Hospital/Weill Cornell Medical Center have identified naturally occurring antibodies in human blood that may help to defend against this form of dementia as well as other neurodegenerative diseases. 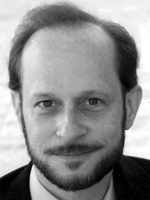 The newly found antibodies selectively target aggregates of beta amyloid proteins called "oligomers" that are toxic to brain cells, while ignoring the benign single-molecule forms of the same proteins. The existence of such antibodies was predicted by animal studies, but they were never previously demonstrated to be present in substantial quantities in blood from normal humans.

Lead researcher Dr. Norman Relkin, a behavioral neurologist and neuroscientist at NewYork-Presbyterian Hospital/Weill Cornell Medical Center, will present the findings on Monday, June 11, at 3:30 pm, at the "2nd Alzheimer's Association International Conference on Prevention of Dementia," in Washington, DC.

Dr. Relkin is director of the Memory Disorders Program at NewYork-Presbyterian/Weill Cornell and associate professor of clinical neurology at Weill Cornell Medical College.

Dr. Relkin's team has been testing an antibody-based immunotherapy called Intravenous Immunoglobulin (IVIG) as a potential new treatment for Alzheimer's. IVIG is made from the blood of healthy donors and was previously reported to contain small quantities of antibodies against beta amyloid.

"The effects of IVIG in lowering beta amyloid levels in Alzheimer's patients in our Phase I clinical trial were much more profound than we expected," Dr. Relkin explains. "We couldn't readily explain this based on the low levels of anti-amyloid antibodies known to be present in IVIG. We suspected there might be another, unseen player."

His laboratory studies demonstrated that IVIG initially bound very little single-molecule ("monomer") beta amyloid in a test tube. However, it gathered up much more of the protein when the amyloid was "aged" in a way that allowed soluble aggregates to form. 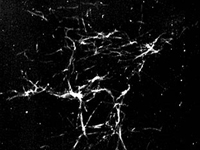 An electron micrograph image shows ribbon-like fibrils of beta amyloid and the much smaller dot-like aggregates that are beta amyloid oligomers: toxic proteins in Alzheimer's disease.

These beta amyloid "oligomers" can grow into insoluble "fibrils" that cluster around brain cells and are a hallmark of Alzheimer's disease. While monomers are produced from birth and appear to be relatively benign, oligomers have been implicated as potent toxins responsible for Alzheimer's-linked memory loss and brain cell death. This has led many scientists to speculate that oligomers may be the main culprit in Alzheimer's and therefore a prime target for a new generation of disease-modifying treatments.

To further confirm that these natural antibodies bind with oligomers, Dr. Relkin and his colleagues collaborated with Drs. Charles Glabe and Rakez Kayed from the University of California at Irvine, who had previously created anti-oligomer antibodies in rabbits. Using techniques pioneered by Dr. Glabe's group, the NewYork-Presbyterian/Weill Cornell scientists were able to measure and extract the human version of anti-oligomer antibodies from IVIG and then demonstrate that these antibodies are present in the blood of normal individuals.

The basis for the selective recognition of oligomers by these antibodies appears to be their capacity to recognize the oligomer's misfolded shape.

"That was a surprise, because most antibodies work by recognizing some aspect of the chemical structure of their target – not their shape," explains Weill Cornell Medical College molecular biologist and study co-author, Dr. Paul Szabo. "That means that even though beta amyloid monomers and oligomers have the same fundamental chemical makeup, human anti-oligomer antibodies can distinguish between them. The antibodies recognize a particular shape that proteins assume only when they become these toxic aggregates."

The ability of the antibodies to recognize toxic proteins based on their shape may have important implications for immune therapy of other neurologic disorders, the researchers explain.

"We were able to confirm that the antibodies we found not only recognize oligomers of beta amyloid but also unhealthy forms of other proteins that accumulate in a wide variety of diseases, such as Parkinson's, Lewy body dementia and Prion disease (the human form of 'Mad Cow' disease), to name a few," says Dr. Relkin.

Since beta amyloid oligomers are much less abundant in the body than the single-molecule variety, the relatively high amount of oligomer-specific antibody found in human blood suggests that the immune system recognizes these aggregates to be a particularly noxious threat.

"This could be part of an innate defense mechanism against Alzheimer's and other age-related neurodegenerative disorders," comments Dr. Marc Weksler, The Irving Wright Sherwood Professor of Geriatrics and professor of medicine at Weill Cornell Medical College, and senior investigator in the Phase I IVIG study that led to this discovery.

However, the clear demonstration of the relationship of these scientific findings to clinical benefit in patients requires much more study, the experts say.

NewYork-Presbyterian/Weill Cornell is currently leading a six-month Phase II study of IVIG in 24 patients with mild and moderate Alzheimer's disease, which is planned to be complete later this year. While this study may provide a signal of the effect of IVIG therapy to clinical outcomes, further investigation in larger controlled and longer-term trials will be needed to definitively demonstrate whether IVIG is useful in treating Alzheimer's.

Still, this discovery substantially boosts our understanding of Alzheimer's and other neurodegenerative illnesses, the experts say.

This work was funded by grants from Baxter Healthcare, which developed and produces GAMMAGARD IVIG; the Citigroup Foundation; and private philanthropy.