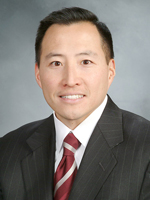 Dr. Min is the inventor of endovenous laser therapy for treating venous insufficiency — when the leg's veins cannot effectively return blood to the heart. Now 10 years old, the minimally invasive technique is used by thousands of physicians around the world to treat a variety of conditions, including varicose veins.

Dr. Min also developed transcatheter duplex-guided sclerotherapy, another minimally invasive method of treating venous insufficiency. His other areas of clinical and research interest include non-invasive treatments of tumors, in particular MR-guided focused ultrasound. He currently leads research on the treatment for uterine fibroids and breast, bone and prostate tumors.

"Dr. Robert Min epitomizes our mission of innovating new treatments that improve the lives of our patients. And, in doing so, he has helped establish the field of interventional radiology. I am delighted to have him serve as chairman of radiology," says Dr. Antonio M. Gotto Jr., the Stephen and Suzanne Weiss Dean of Weill Cornell Medical College.

"A remarkably adept physician and a leading light in his field, Dr. Min has helped pioneer safe methods of providing relief for painful and common conditions," adds Dr. Herbert Pardes, president and CEO of NewYork-Presbyterian Hospital.

As many as one quarter of all U.S. adults will develop venous insufficiency in their lifetime. Experts say the condition, which can cause leg pain and skin ulceration, is often misdiagnosed and improperly treated.

Dr. Min oversees more than 60 radiologists in three different areas: Weill Cornell Vascular, which offers minimally invasive treatments for venous insufficiency, uterine fibroids, and evaluation of peripheral arterial disease; Weill Cornell Imaging at NewYork-Presbyterian/Weill Cornell, which provides state-of-the-art outpatient diagnostic services at four locations on the Upper East Side of Manhattan; and Weill Cornell Radiology, which provides the full spectrum of diagnostic radiology and image-guided interventions for inpatients and outpatients, and for the Department of Emergency Medicine at NewYork-Presbyterian/Weill Cornell.

"I am committed to redefining the field of radiology and the role of radiologists," says Dr. Min. "While new developments in technologies will certainly improve what we are able to do, the single most important factor is providing complete care for our patients. I believe that being more involved in patient care, beginning with initial evaluation and continuing through follow-up, will lead directly to better outcomes."

"I am excited and grateful to have the honor of continuing to serve the Department as chairman and radiologist-in-chief," he adds.

Going forward, Dr. Min says he will work toward expanding the Department's research efforts as well as its Division of Emergency Radiology.

Dr. Min graduated from Weill Cornell Medical College in 1990 and received his M.B.A. from Columbia University in 2002. He completed an internship in surgery and a residency in diagnostic radiology at NewYork-Presbyterian/Weill Cornell, where he served as chief resident. He received additional subspecialty fellowship training in cardiovascular interventional radiology at Stanford University Medical Center, and was appointed to NewYork-Presbyterian/Weill Cornell in 1999.

Dr. Min has authored or co-authored more than 50 scientific articles and abstracts on vascular conditions, and numerous book chapters on venous disorders.

Weill Cornell Medical College, Cornell University's medical school located in New York City, is committed to excellence in research, teaching, patient care and the advancement of the art and science of medicine, locally, nationally and globally. Weill Cornell, which is a principal academic affiliate of NewYork-Presbyterian Hospital, offers an innovative curriculum that integrates the teaching of basic and clinical sciences, problem-based learning, office-based preceptorships, and primary care and doctoring courses. Physicians and scientists of Weill Cornell Medical College are engaged in cutting-edge research in areas such as stem cells, genetics and gene therapy, geriatrics, neuroscience, structural biology, cardiovascular medicine, transplantation medicine, infectious disease, obesity, cancer, psychiatry and public health — and continue to delve ever deeper into the molecular basis of disease in an effort to unlock the mysteries of the human body in health and sickness. In its commitment to global health and education, the Medical College has a strong presence in places such as Qatar, Tanzania, Haiti, Brazil, Austria and Turkey. Through the historic Weill Cornell Medical College in Qatar, the Medical College is the first in the U.S. to offer its M.D. degree overseas. Weill Cornell is the birthplace of many medical advances — including the development of the Pap test for cervical cancer, the synthesis of penicillin, the first successful embryo-biopsy pregnancy and birth in the U.S., the first clinical trial of gene therapy for Parkinson's disease, the first indication of bone marrow's critical role in tumor growth, and most recently, the world's first successful use of deep brain stimulation to treat a minimally-conscious brain-injured patient. For more information, visit www.med.cornell.edu.