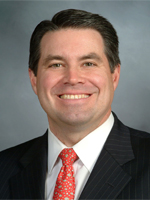 Previously, Dr. Grant was acting chief of NewYork-Presbyterian's Division of Plastic Surgery, a position he has held since January 2004. He is also currently director of the Hospital's plastic surgery residency program.

"Dr. Grant has proven to be an adept leader in plastic surgery. I am very pleased that he will head this joint division for NewYork-Presbyterian," says Dr. Eric Rose, the Milstein Professor and chairman of surgery at Columbia University College of Physicians and Surgeons and surgeon-in-chief at NewYork-Presbyterian/Columbia.