Dr. Frank A. Chervenak Elected to Institute of Medicine of the National Academies 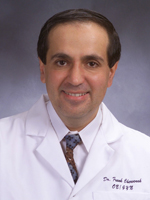 Dr. Frank A. Chervenak received his Bachelor of Science degree from Pennsylvania State University with highest distinction, and his medical degree from Thomas Jefferson University, where he was elected a member of Alpha Omega Alpha Medical Honor Society. Dr. Chervenak completed his internship in internal medicine at New York Medical College, residency in obstetrics and gynecology at New York Medical College in St. Luke's–Roosevelt Hospital Center, and a fellowship in maternal-fetal medicine at Yale University School of Medicine. In 2002, he received a Master in Medical Management degree from Carnegie Mellon University; and in 2008, he earned fellowship status from the American College of Physician Executives.