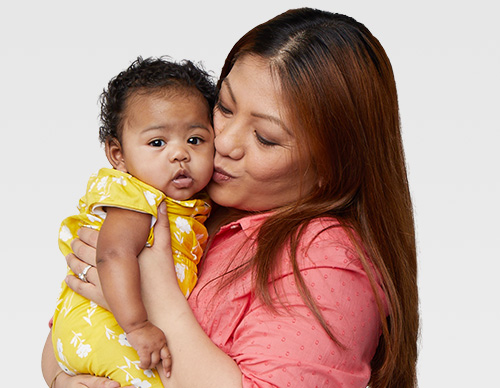 I’m thankful they’ve given me the rest of my life, and I’m able to spend time with my daughters.

Looking at Jackie Alumno and her eight-month-old daughter, Ava, you wouldn’t know the bond they share might not have ever happened. The Bronx mom of an adult child had a mostly uneventful pregnancy, but during her delivery, doctors realized Jackie had a potentially life-threatening condition.

Earlier in her pregnancy, an ultrasound showed Jackie had placenta previa, a condition in which the baby’s placenta covers the mother’s cervix, causing bleeding. Because of the potential to bleed during a vaginal delivery, Jackie’s obstetrician, Dr. Shawna Hughes, recommended she have a cesarean delivery. On November 20, Jackie arrived at NewYork-Presbyterian Lawrence Hospital for a scheduled C-section.

At the hospital, Jackie was brought into the operating room. She was given a cardiac monitor to track her heart rate throughout the delivery. A wireless labor monitor was placed on Jackie’s abdomen to monitor the baby’s heartbeat during the delivery process, as well. Soon baby Ava was born, but not long after the anesthesiologist noticed Jackie was unresponsive when her name was called. Her blood pressure and oxygen levels dropped, and her heartbeat was undetectable on the cardiac monitor.

“I started bleeding out. The last thing I remember was the doctor speaking, you know, I heard the doctor saying I had amniotic fluid embolism,” Jackie recalls.

Amniotic fluid embolism is a serious condition that occurs when the amniotic fluid — the fluid that surrounds the baby during pregnancy — enters the mother’s bloodstream. Amniotic fluid in the blood can cause the mother’s immune system to react. This reaction activates abnormal clotting in the lungs and blood vessels, which causes uncontrollable bleeding. Although amniotic fluid embolism is rare — occurring in 1 in every 40,000 deliveries in North America, according to the Amniotic Fluid Embolism Foundation — it is a leading cause of maternal death globally.

Jackie went into cardiac arrest twice. Dr. Hughes quickly called in other obstetrical colleagues, including Dr. Anna Burgansky, director of the Department of Obstetrics & Gynecology at NewYork-Presbyterian Lawrence Hospital and an assistant professor of OB/GYN at Columbia University Vagelos College of Physicians and Surgeons, to resuscitate her and begin treatment. Dr. Hughes and the team worked to stop the bleeding and performed a transfusion to replace the blood Jackie was losing. Because of concerns of bleeding due to the placenta previa, Dr. Hughes had several pints of blood from the blood bank on hand. An intubation tube was inserted into her mouth to help her breathe.

Once she was stabilized, Jackie was moved to the intensive care unit (ICU), where she was monitored by the critical care team. Although Jackie was unable to leave the ICU to see baby Ava, the nursing staff were continually providing updates on the baby’s health. After three days in intensive care, Jackie was able to see her baby for the first time.

“Before this happened to me, I didn't know anything about amniotic fluid embolism. When I got home, I started reading about it. I think I survived because the team started treating me for it right away,”Jackie says. “They didn't give up on me. I’m thankful they’ve given me the rest of my life, and I’m able to spend time with my daughters.”

Now, Jackie cherishes every moment she gets with both her daughters, singing to and cuddling baby Ava whenever she gets the chance.