Endoscopic gallbladder drainage (EGBD) was first described in 1984, but has not been fully integrated into the management algorithm for cholecystitis. Minimal academic work has been done to compare the more commonly used percutaneous gallbladder drainage (PGBD) to EGBD to tease out the pros and cons of each. Dr. Michel Kahaleh, senior investigator on the study, suggests that it’s time for EGBD to come more fully into the light and be considered a viable option for the portion of patients who cannot receive surgery.

“We’ve improved scope and stent technology over the last decade, and more,” said Dr. Kahaleh. “Endoscopic techniques are now as reliable as percutaneous drainage, if not more reliable.”

The Weill Cornell study looked at all cases of cholecystitis in treated at NewYork-Presbyterian/Weill Cornell Medical Center from July 2011 through November 2013 where the patient was deemed not to be a surgical candidate. The total of 73 patients included 40 cases where percutaneous gallbladder drainage (PGBD) was employed, and 30 cases where endoscopic drainage (EGBD) was used. Data was grouped into two segments (PGBD, EGBD) based on the initial intervention used for drainage. Use of both transmural endoscopic drainage and transpapillary drainage was included in the endoscopic category.

The following comparisons were noted in the 29 months of data: 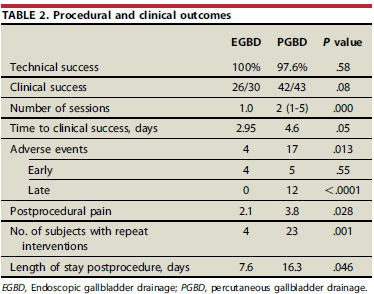 “By using endoscopic gallbladder drainage, we can have fewer sessions and have patients out of the hospital sooner, with less pain too. This is important in an age where lowering costs and raising efficiency is required.”