Targeting Psychosis: Getting Help Early to Adolescents and Young Adults

Lisa B. Dixon, MD, MPH is helping to change the narrative for adolescents and young adults who are experiencing their first episode of psychosis. By leading efforts to intervene early, Dr. Dixon, a psychiatrist with NewYork-Presbyterian/Columbia University Irving Medical Center, is helping to shorten the pathway to care, reduce the duration of untreated psychosis, and improve outcomes. 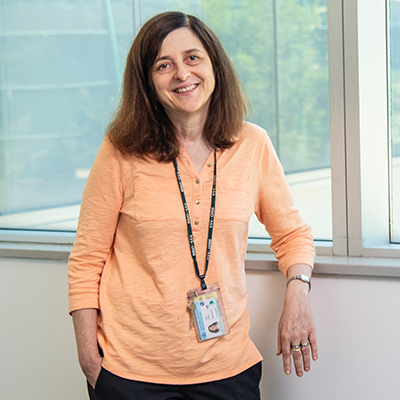 “We know that an enormous percentage of chronic mental illnesses begins in adolescence and early adulthood. There is some evidence that psychosis itself is toxic to the brain and there is a very robust association between the duration of untreated psychosis and outcomes,” says Dr. Dixon, who is Director of the Division of Behavioral Health Services and Policy Research within the Department of Psychiatry at Columbia and Director of the Center for Practice Innovations at the New York State Psychiatric Institute.

In this role, Dr. Dixon oversees activities for the New York State Office of Mental Health in implementing evidence-based practices for persons diagnosed with serious mental illness. She is also leading the innovative program, OnTrackNY, a statewide initiative designed to improve outcomes and reduce disability for the population of individuals experiencing their first episode of psychosis. Dr. Dixon is supported in these efforts by Co-Directors Ilana Nossel, MD, Medical Director of OnTrackNY, and Iruma Bello, PhD, Clinical Training Director of OnTrackNY. Through this program, young people with early psychosis receive help from Coordinated Specialty Care teams that work with them to achieve their goals for school, work, and relationships.

Statewide programs are coordinated by OnTrack Central at the Center for Practice Innovations and regional field offices of the Office of Mental Health. OnTrack Central also provides training and technical assistance to program teams based on OnTrackNY’s model of Coordinated Specialty Care.

Dr. Dixon’s dedication for improving the lives of young people with debilitating mental illness stems from personal experience – her brother has schizophrenia. He began showing signs of psychosis while they were both in medical school and was unable to graduate. She believes that if her brother had had access to an early intervention program when he was first getting sick, life might have been very different for him.

“We are very tuned in to shortening the pathway to diagnosis and decreasing the duration of untreated psychosis,” says Dr. Dixon. “We don’t want teenagers hearing voices or having paranoid delusions while trying to manage high school with no one understanding their behavior or intervening to help. The OnTrackNY program is quite different from traditional schizophrenia treatment models, which have historically focused resources on patients who already have chronic and severe disabilities.”

To address this compelling need for early intervention, Dr. Dixon initiated a study to assess outcomes of adolescents and young adults who are enrolled in OnTrackNY’s Coordinated Specialty Care program. Data is also being aggregated with similar programs across the country through the Early Psychosis Intervention Network (EPINET) data repository. The intervention study was borne out of the Recovery After an Initial Schizophrenia Episode (RAISE) grant from the National Institute of Mental Health that was awarded to the Columbia Department of Psychiatry.

Dr. Dixon and her colleagues at NewYork-Presbyterian/Columbia looked at hospital and emergency room use among 138 Medicaid enrollees six months before and six months after discharge from OnTrackNY, as well as six months following hospital-based or ER treatment. The study is the first of its kind in the country to examine post-intervention outcomes of participants in Coordinated Specialty Care programs. Their findings, published in the November 2, 2021, issue of Psychiatry Services, revealed:

The study, which is the first of its kind in the country to examine post-intervention outcomes of participants in Coordinated Specialty Care programs, found a significant decline in inpatient hospital visits from the pre-OnTrackNY enrollment period to the predischarge period.

In an earlier study, Dr. Dixon and her colleagues in the Department of Psychiatry at NewYork-Presbyterian/Columbia evaluated outcomes, as well as predictors of outcomes, in 325 individuals ages 16 to 30 with recent-onset nonaffective psychosis over a one-year period. The participants were enrolled in OnTrackNY and had at least one three-month follow-up.

Clinicians provided data at baseline and quarterly up to one year related to symptoms, occupational functioning, social functioning, education and employment status, and psychiatric hospitalization rate. Results, which were published in the August 1, 2018, issue of Psychiatric Services, were encouraging:

The study further indicated that demographics and baseline education predicted education and employment outcomes. With this in mind, the authors recommended that Coordinated Specialty Care teams should strive, in particular, to support the occupational goals of individuals at increased risk of not engaging in work or school, including male participants and participants from racial and ethnic minority groups.

These studies and others associated with OnTrackNY’s Coordinated Specialty Care program provide clear evidence to support its multidisciplinary approach. Under Dr. Dixon’s leadership, OnTrackNY has expanded to 22 sites in New York State. With the recognition of the importance of reducing the duration of untreated psychosis, similar Coordinated Specialty Care programs have been expanding across the country, increasing from 12 sites in 2008 to 340 sites in 2020. Long-term follow-up studies are underway to understand whether the benefits of OnTrackNY extend beyond the two years that most young adults are enrolled.

Another important aspect of the work of Dr. Dixon and her team at NewYork-Presbyterian/Columbia is improving access to treatment programs. One obstacle – not unexpected – is the public stigma surrounding first episode psychosis. “Certain types of severe mood disorders and schizophrenia are highly stigmatized and increases the duration of untreated psychosis,” says Dr. Dixon. “There is huge shame associated with these conditions made worse by their portrayal in the media.”

To counteract this challenge, the team at NewYork-Presbyterian/Columbia conducted a first-of-its-kind proof-of-concept study employing a very brief anti-stigma intervention in a sample of young adults with baseline, post-intervention, and 30-day follow-up assessments. The researchers found that a 90-second video of a 22-year-old African American woman with schizophrenia humanized the mental illness and reduced stigma among participants ages 18 to 30 years as compared to non-intervention controls and a written intervention vignette containing the same material.

“We are in a new phase in the world of schizophrenia care,” says Dr. Dixon. “When I was trained, it was an illness that in some ways patients were sentenced to a lifetime of disability. Because of developments in science, advocacy, policy, and the participation of individuals with lived experience, we are now living in a time of hope.”