Congenital hemangiomas involving the penis and scrotum are formed at birth and can be categorized into three groups: rapidly involuting, partially-involuting, and non-involuting congenital hemangiomas. These vascular anomalies include both tumors and malformations and may be associated with extension into adjacent structures. Because they have the potential to cause and inflict pain just as any perceived anatomic genital abnormality would, expeditious treatment is advised.

With non-involuting congenital hemangiomas, in particular, the tumor does not regress or grow with age. Pyogenic granulomas, another acquired vascular tumor, develop over vascular lesions and cause bleeding. When presented with these conditions in a 31-month-old male patient, a multidisciplinary team of physicians at NewYork-Presbyterian Morgan Stanley Children’s Hospital chose surgical resection that resulted in an excellent postoperative outcome. 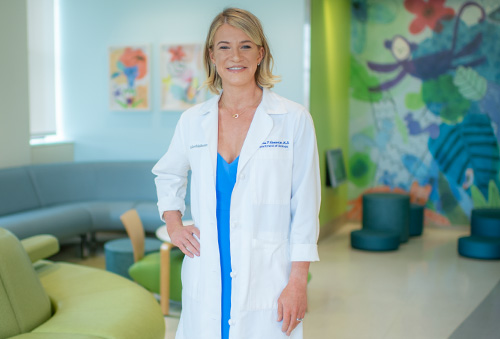 Pediatric urologist Christina Carpenter, MD, MS; June Wu, MD, a pediatric plastic surgeon/craniofacial surgeon and Co-Director of the Center for Interdisciplinary Vascular Anomalies Group; and Miyad Movassaghi, MD, a fourth-year resident in the Department of Urology, note to their knowledge, this is the first case of a penile/scrotal non-involuting congenital hemangioma (NICH) managed surgically.

“For this condition, in particular, given its propensity toward lack of involution and for potential growth, surgery is an excellent choice,” the authors note. “It should be approached in a careful, well-planned manner in order to achieve optimal results without inciting undue harm. It also should not be delayed in order to offer the best cosmetic and functional results in adult life.”

After making an initial diagnosis from MRI analysis, a biopsy confirmed a benign vascular lesion with features of NICH and overlying pyogenic granuloma. The decision was made to treat the condition surgically. The team used a circumcising incision to deglove the penile skin involving the vascular mass to the base of the penis and penoscrotal junction to allow for a circumferentially placed skin graft from the thigh.

They were especially mindful of the risk of bleeding, taking great care in the presence of several large arteries at the base of the penis. The two main arteries supplying the mass seen intra-operatively were consistent with those seen on imaging, coming from the external pudendal vessels. Once encountered, these were individually isolated and tied off. In doing so, they were able to remove the mass in its entirety without violating Buck’s fascia and any underlying vessels or nerves.

The patient stayed in the hospital for five days, allowing the graft to take. His post-operative course was uncomplicated. Four weeks after discharge, the graft appeared to be healing well upon postoperative evaluation.