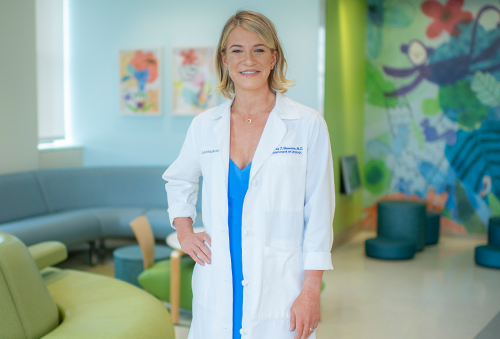 In her practice, Dr. Carpenter frequently receives referrals for infants with undescended testicle. Undescended testicle is one of the most common reasons for a referral to a pediatric urologist. “Ideally, we should see patients whose testicles have not descended by six months corrected age,” says Dr. Carpenter. “If this is confirmed on exam during the visit, we would recommend proceeding with intervention. Surgery to correct the condition can be accomplished either through an inguinal or a scrotal incision, or if the testes are not palpable on exam, through an abdominal approach performed laparoscopically.”

For second stage Fowler-Stephens orchiopexy, Dr. Carpenter will use robotics. “I find that the robot allows for much better precision and I can make sure that I'm preserving the blood supply much more accurately by using the robot rather than traditional laparoscopy. The visualization with the robot is so great and the movement of the instruments so precise that you feel very comfortable that the operation will have a good outcome.”

Choosing Wisely® is an initiative of the American Board of Internal Medicine Foundation that seeks to advance a national dialogue on unnecessary medical tests, treatments, and procedures. In 2013, in conjunction with the American Urological Association, the organization released an evidence-based statement on cryptorchidism advocating against performing ultrasound in affected boys due to the test’s poor ability to localize nonpalpable testes. The recommendation was based on evidence that such imaging is ineffective, adds little to the physical examination, and could, in fact, be misleading.

With this in mind, Dr. Carpenter served as lead author in a study evaluating imaging for managing cryptorchidism. “The two-fold purpose of our study was to identify demographic and clinical factors that predict which patients will be sent for pre-referral testing and to determine the impact of the Choosing Wisely recommendation on the rate of imaging referrals,” says Dr. Carpenter.

The researchers evaluated the records of 1,010 boys who underwent orchiopexy and/or diagnostic laparoscopy for a diagnosis of undescended or nonpalpable testis between January 2007 and August 2018. The researchers compiled data on height, weight, race, insurance type, pre-referral imaging status, testis location at time of surgery, and distance from the hospital. Their findings, published in the August 2020 issue of the Journal of Pediatric Urology, included:

“Our findings demonstrate that imaging studies continued to be ordered for undescended testes despite the evidence and recommendation of the Choosing Wisely initiative,” notes Dr. Carpenter. “Importantly, this suggests we should promote awareness to pediatricians and primary care physicians of why imaging is unnecessary for this diagnosis and encourage prompt referral to pediatric urologists.”