Causes of Cerebral Palsy: Environmental, Genetic, or a Combination of Both?

Cerebral palsy (CP), the most common motor disability in children, has been linked to environmental factors such as infection, neonatal stroke, or birth asphyxia. But with some patients presenting without a clear etiology and the heterogeneity of potential causes, there is a strong belief that genetics plays a part. Currently, there are many proposed pathogenic gene variants defined in published studies, but genetic testing in patients with cerebral palsy is not consistently used due to gaps in understanding about which patients should be tested.

Jason B. Carmel, MD, PhD, a child neurologist and motor system neuroscientist, is the Director of the Weinberg Family Cerebral Palsy Center in the Division of Pediatric Orthopedics at NewYork-Presbyterian/Columbia University Irving Medical Center. Dr. Carmel is dedicated to research to understand the causes of cerebral palsy, help change the course of the disease, and to apply knowledge in nerve injury and repair to better the lives of individuals with this disabling condition. 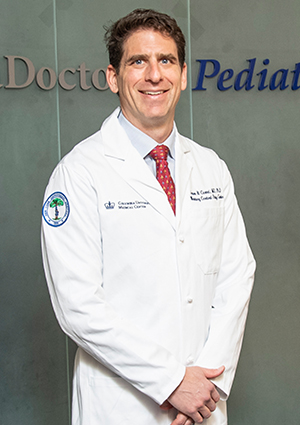 “Cerebral palsy has historically been thought of as an acquired syndrome, but there's an increasing recognition of the genetic susceptibility to cerebral palsy,” says Dr. Carmel. “As we understand more about the genetics, we asked the question about whether people with known risk factors for cerebral palsy should have genetic testing.”

To address the central question of who to test, Dr. Carmel and colleagues in genomic medicine and clinical genetics, orthopedics, and neurology at Columbia undertook a study to determine which patients with cerebral palsy should undergo genetic testing by comparing the rate of likely causative genetic variants in individuals with and without environmental risk factors.

The research team evaluated 151 unrelated patients with cerebral palsy cared for at NewYork-Presbyterian/Columbia. In addition to performing whole-exome sequencing, patients were screened for environmental risk factors such as prematurity, brain-related events and malformations, birth asphyxia, and intrauterine infection. Of the 151 participants, 81.5 percent had identified or suspected risk factors for their CP and 18.5 percent were not associated with risk factors.

The study’s findings, published in the December 2021 issue of Developmental Medicine and Child Neurology, showed:

“This first study of 150 patients is just beginning to address these questions,” says Dr. Carmel. “Further studies are needed in order to define the pretest probability for each individual. We also need to determine how useful this genetic information is to understand the natural history of the different types of cerebral palsy, and then hopefully be able to better target therapies.”