Congenital adrenal hyperplasia (CAH) involves a deficiency of an enzyme critical to the synthesis of cortisol, aldosterone, or both. Deficiency of 21-hydroxylase, resulting from mutations or deletions of the CYP21A gene, is the most common form of CAH, accounting for 90 percent of cases. Treatment and management with pharmacologic intervention are required for individuals with classical CAH to help maintain homeostasis of these hormones.

“Classical CAH, the most severe type, can result in increased production of androgens during the period of early development in utero,” says Dix P. Poppas, MD, Chief of Pediatric Urology at NewYork-Presbyterian Komansky Children’s Hospital and NewYork-Presbyterian/Weill Cornell Medical Center. “In the most extreme form, in utero, where girls have a significant deficiency of 21-hydroxylase, their external genitalia may become virilized.” 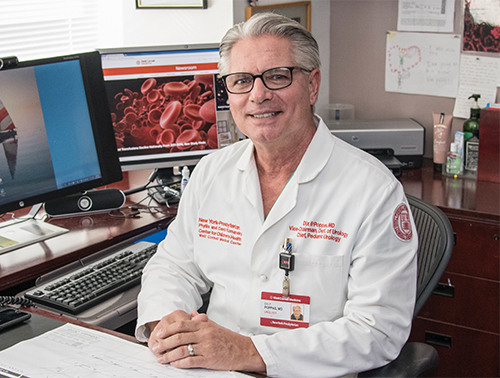 “Patients with CAH require care and lifelong treatment, and early diagnosis and treatment is critical for achieving a positive outcome,” continues Dr. Poppas, who is also the Surgical Director of the hospital’s Comprehensive Center for Congenital Adrenal Hyperplasia. As the first center of excellence designated by the CARES (Congenital Adrenal Hyperplasia Research, Education, and Support) Foundation, NewYork-Presbyterian has been a pioneer in the treatment and improved management of patients with CAH and is a major referral site for pediatric and adult patients from around the world.

According to Dr. Poppas, children born with CAH have enough of their mother’s circulating hormones initially, but within a day or two after birth, when these hormones are depleted, they can go into adrenal crisis from the cortisol and aldosterone deficiency. Through the efforts of the CARES Foundation, newborn screening for CAH is now conducted in every state. “This testing has been very important in identifying children with CAH and has prevented newborn babies from an adrenal crisis and death,” says Dr. Poppas, who notes close collaboration with pediatric endocrinologists and psychologists is essential for proper medical management to ensure the well-being of these children.

A leader in the field, Dr. Poppas has been advancing the surgical management of patients with CAH and furthering the basic understanding of the mechanisms of CAH throughout his career. “The most significant area where we have had direct influence is in the improvement of surgical techniques to restore genital anatomy for optimal function,” says Dr. Poppas, who has published multiple papers that have furthered knowledge in this field. “Better understanding and innovative surgical techniques at NewYork-Presbyterian have allowed patients and parents to have a more thorough understanding of the surgical options available as part of the overall care of each patient.”

Pursuing Innovations in the Laboratory

In the Institute of Pediatric Urology Research Laboratory at Weill Cornell Medicine, Dr. Poppas’ research is focused on using the zebrafish model to study the complex genetics of CAH and the use of CRISPR technology to repair the 21-hydroxylase defect.

“There is a wide range of consequences in children who have a deficiency of 21-hydroxylase,” explains Dr. Poppas. “Not every patient with CAH has a complete deficiency of enzymes. The genetic mutations that result in CAH are very complicated. Patients can also have a range of 21-hydroxylase enzyme activity from zero percent up to 80 percent. This can affect how the genitalia develop, but also how much medication the patient will need in order to grow normally and prevent adrenal crisis. A person would need less medication and monitoring with activity over 2 percent as compared to less than 2 percent.”

The ultimate goals for Dr. Poppas’ research are focused on two key areas. One is to activate existing 21-hydroxylase activity to reduce or eliminate the need for medication; the other is to replace the defective 21-hydroxylase enzyme in patients with CAH with a new, working 21-hydroxylase enzyme. “Based on the 2 percent activity level,” he says, “it might mean we wouldn’t have to replace all of the enzyme activity, but just enough to get over that threshold. If we could do that then there might be a cure for CAH.”

A zebrafish model is facilitating research on the complex genetics of CAH.

Using CRISPR genome editing technology, the research team deletes the 21-hydroxylase gene in normal zebrafish and examines the consequences. “In the simplest terms, once we’ve knocked out the 21-hydroxylase, we then have to see if we can successfully put it back into the zebrafish,” notes Dr. Poppas. “That technology is being moved over into studies in human adrenal cells. Ideally what I would like to see happen is being able to take a biopsy of a patient's adrenal gland after birth, isolate the cells and allow them to grow with a goal of creating a functional gene that can be reintroduced to the patient.”

“What is particularly remarkable about CAH is if you can just restore the functional ability of that enzyme to work at 3 to 5 percent in patients with classical CAH, you can probably wean them off the medication,” continues Dr. Poppas. “This is very different than, for example, diabetes, sickle cell disease, or cystic fibrosis. For CAH, you just need to replace the deficient gene with the right protein and then the rest will be taken care of by the body.”

Dr. Poppas and his Weill Cornell Medicine colleagues are also conducting studies designed to develop chemical screens to uncover drugs that might activate 21-hydroxylase activity, which would be an alternative to replacing the defective enzyme. “If it is possible to replace the enzyme activity, that would be a seismic shift in how the lives of patients with CAH would be affected,” he says.

“We serve a large population of patients with CAH and our multispecialty team has the skills and experience to meet their healthcare needs throughout their lives,” says Dr. Poppas. “The good news is that the majority of children can go on to lead normal lives with proper diagnosis and treatment.”