With a five-year, $9 million Program Project Grant from the National Cancer Institute, a team of Weill Cornell Medicine basic and clinical investigators have been pursuing research to better understand why patients with an aggressive and incurable form of lymphoma initially respond to treatment, only to relapse over time. Investigators are using cutting-edge approaches to clarify the molecular, cellular, and genetic changes that occur in patients with mantle cell lymphoma (MCL) before, during, and after treatment. Their findings may enable them to develop therapies that are effective, well tolerated, and tailored to individual patients with MCL. This is the first P01 grant that is solely focused on this rare blood cancer.

Approved drugs and experimental therapies are currently available for MCL, but how they work or why patients ultimately become resistant to them is unknown. The research team seeks to define the scientific principles behind these drugs to enable clinicians to improve the lives of their patients and ultimately cure their disease. Specifically, they are using genomic and bioinformatics approaches to determine how genes are programmed by the cell cycle in tumor cells, how palbociclib (a selective inhibitor for cyclin-dependent kinase 4 and 6) reprograms them to impede cell division and increase therapy vulnerability, and how to overcome resistance to palbociclib and the BTK inhibitor ibrutinib. In the past, tumors have been analyzed in bulk. The researchers now have the ability to analyze and interrogate every tumor at the single cell resolution – an extremely powerful approach.

Their studies build on two decades of investigations on how the cell cycle is regulated in normal immune function and in B-cell cancers. In previous studies, they discovered that intentionally stopping the cell cycle by inhibiting the enzyme CDK4 or CDK6, which is needed for the first growth phase, not only prevents cancer cells from dividing, but also weakens them by causing an imbalance in gene expression in mice. To replicate these findings in humans, they identified a small molecule on Pfizer’s shelf that could act in the same way as the natural CDK4/6 inhibitor. They believed this molecule would be critical to understanding the normal immune response and how to correct it and possibly control cancer, and that this particular step in the cell cycle was the key step in driving human cancer, especially in MCL and breast cancer.

Two phase 1 clinical trials, led by a scientist in the Department of Pathology and Laboratory Medicine at Weill Cornell Medicine and oncologists in Weill Cornell’s Lymphoma Service, showed that the drug, palbociclib, which is FDA approved for breast cancer, in combination with ibrutinib, an FDA-approved MCL drug, was very well tolerated, shrank MCL tumors in 67 percent of patients, and 37 percent of the patients achieved durable complete remission.

Two phase 1 clinical trials, led by a scientist in the Department of Pathology and Laboratory Medicine at Weill Cornell Medicine and oncologists in Weill Cornell’s Lymphoma Service, showed that the drug, palbociclib, which is FDA approved for breast cancer, in combination with ibrutinib, an FDA-approved MCL drug, was very well tolerated, shrank MCL tumors in 67 percent of patients, and 37 percent of the patients achieved durable complete remission. With a median follow-up in survivors of 25.6 months, the two-year progression-free survival was 59.4 percent and the two-year overall survival was 60.6 percent. Patients who were treated with ibrutinib alone initially went into partial or complete remission, only to become resistant to it quickly or over time.

Subsequent studies by Weill Cornell investigators have continued to elucidate the role of selective CDK4/6 inhibitors in targeting the cell cycle in MCL and the therapeutic potential of combination therapies.

In September 2018, Weill Cornell began enrolling patients with previously treated MCL in a multicenter phase 2 study of palbociclib-ibrutinib combination therapy in patients to further understand why this combination therapy is more effective than ibrutinib alone. According to the investigators, if they can identify how to combine the cell cycle inhibitor with a partner drug, they will be able to increase dramatically the durability and depth of the clinical response.

Oncologists in the Multiple Myeloma and Amyloidosis Research Program at Columbia University Irving Medical Center are tackling these two disorders with basic science investigations and multiple clinical trials for both. Here, a team of scientists is focused on the identification of novel targets and potential therapies for multiple myeloma bone disease and AL amyloidosis.

The program’s laboratory researchers initially identified that multiple myeloma cells secrete a protein called MMP-13, which induces osteoclast formation and leads to the development of lytic lesions. This can result in spine fractures, paraplegia, and pain – all characteristic of multiple myeloma bone disease. They then discovered that MMP-13 also binds to and inhibits T-cells, providing a link between the immune microenvironment in multiple myeloma and bone disease that had never been described before. 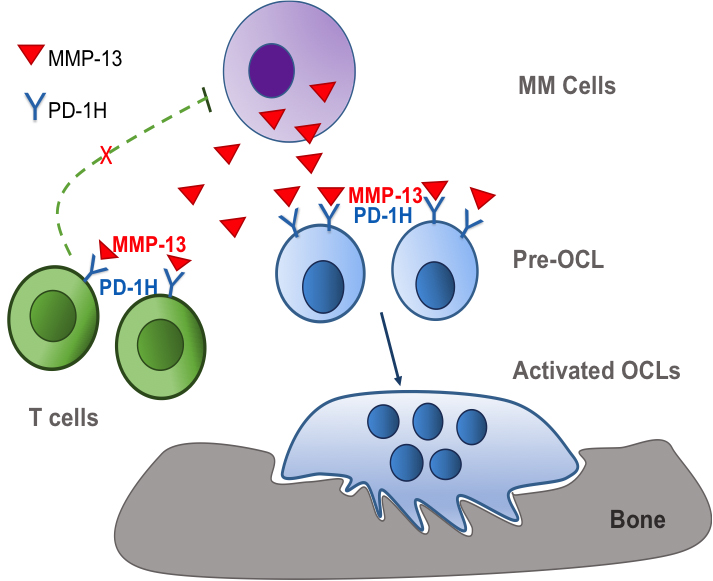 Having identified linkages between MMP-13 and both osteoclast activation and immune suppression, the researchers could now target MMP-13 for development of a neutralizing antibody to prevent extensive bone disease and the risk of infection that comes with immune suppression. So not only did they identify the mechanism of action of bone disease and suppressed immune system, they also identified a new approach to target both.

Their current work focuses on defining the effects of MMP-13 on osteoclasts and on the development of strategies to block MMP-13 for the treatment of multiple myeloma bone disease.

AL amyloidosis, a close relative to multiple myeloma, is a rare systemic disorder caused by an abnormality of plasma cells in the bone marrow, which builds up amyloid in and around tissues, nerves, and organs, resulting in progressive and widespread organ damage and high mortality rates. The Columbia Amyloidosis Multidisciplinary Program (CAMP) is an international referral center for this multiorgan disorder, and each year the program cares for more than 100 AL patients. At the same time, the Multiple Myeloma and Amyloidosis Research Program has an ongoing series of translational clinical trials, including those studying treatments for relapsed AL amyloidosis.

To date, there are no approved treatments for AL amyloidosis, specifically for patients who have relapsed and are no longer responding to a drug regimen. AL amyloidosis is particularly hard to treat because it is challenging to diagnose; typically, patients remain undiagnosed for years while being treated only for organ-related problems.

In previous studies, the chemotherapy drug bendamustine administered on its own proved to be well tolerated, especially by multiple myeloma patients. Given the efficacy and tolerability of bendamustine in the treatment of multiple myeloma, the investigators set out to evaluate its use in combination with the steroid, dexamethasone, for AL amyloidosis patients in relapse and who are not tolerating other therapies.

The trial enrolled 31 patients who received a combination dosage of bendamustine and dexamethasone (ben-dex) in 28-day cycles. Patients were treated up until their disease progressed or up to six cycles after attaining a full, positive response from the regimen. The study demonstrated that 57 percent of patients experienced a partial or better response to the treatment, with 11 percent achieving a complete positive response. The new combination therapy was tolerated well by the participants, even very sick patients, without such side effects as organ dysfunction that prior studies have not been able to achieve.

The study, conducted in six institutions, is the first prospective phase 2 trial of combination ben-dex for the treatment of relapsed or refractory AL amyloidosis.