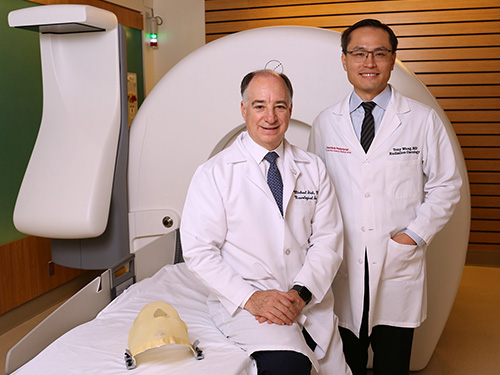 Dr. Michael B. Sisti and Dr. Tony J. Wang, Co-Directors of the Center for Radiosurgery

In its 50-year history, the Gamma Knife has proven to be one of the most significant noninvasive technologies available to treat benign and malignant brain lesions and disorders. Michael B. Sisti, MD, Co-Director of the Center for Radiosurgery at NewYork-Presbyterian/Columbia University Irving Medical Center, recognized the potential of stereotactic radiosurgery (SRS) early in his neurosurgical career, and, indeed, established New York City’s first noninvasive radiosurgery program. For more than 30 years, Dr. Sisti has safely and successfully operated on more than 6,000 patients with complex brain tumors, employing state-of-the-art computer-guided microneurosurgery and Gamma Knife radiosurgery.

“Once we obtained the Gamma Knife in 1998, I made the decision that I would radiate tumors less than 22 millimeters, and restrict my surgical practice to larger tumors,” says Dr. Sisti, who has particular expertise in treating acoustic neuromas, meningiomas, and epidermoids in the cerebellopontine angle.

The ability of a neurosurgeon to perform either surgery or radiosurgery offers patients the best possible outcomes, notes Dr. Sisti. “In many centers in the U.S., surgery and radiosurgery reside in two different worlds, although that has been changing. Lars Leksell, the inventor of the Gamma Knife, perceived it as a surgical device. He believed that surgeons who understood the disease, the patients, and the indications and treatments, should use the Gamma Knife like any other tool. Stereotactic radiosurgery could replace surgery or be used as an adjunct to surgery, whichever is in the best interest of the patient.”

The Gamma Knife has continued to evolve over the years. The Gamma Knife® Icon™ currently in use at Columbia gives clinicians the option to perform single or fractionated, frame-based or frameless treatments, allowing for more individualized delivery without sacrificing precision and accuracy. “Icon was introduced in Europe in 2015, in the United States in mid-2016, and we started using it in early 2017,” says Dr. Sisti. “Though the experience in the U.S. with Icon is only two years old, we embraced it from day one. In addition to the frame, the system offers thermoplastic mask immobilization that holds the patient incredibly secure. A great advantage of the mask as it relates to acoustic neuromas is the possibility to break up the radiation dose into anywhere from one to five fractions. If we can keep the daily dose of radiation low enough to the cochlear nerve in the inner ear, we have a better chance to preserve hearing.”

“I use the mask 95 percent of the time for every condition and 100 percent for patients with acoustic neuroma,” continues Dr. Sisti. “Icon has vastly expanded the indications, not just for hearing preservation in acoustic patients, but for our patients with cancer as well. It’s a total game changer.”

In 2016, Dr. Sisti and Columbia researchers published in the Journal of Radiation Oncology their preliminary results of a retrospective study that examined post-SRS outcomes in patients managed by both surgery and radiation for acoustic neuroma that followed a paradigm of recommending SRS for a tumor < 2.2 cm and surgery for a tumor ≥ 2.2 cm in symptomatic patients. Reviewing outcomes in 424 patients between 1998 and 2015, they concluded that SRS offers good local control and stable or improved symptoms, including hearing deficit, balance, tinnitus, and trigeminal and facial nerve impairment. A minimal number of patients required salvage therapy, suggesting that patients treated at high volume centers by a skilled subspecialized neurosurgeon may experience improved outcomes. 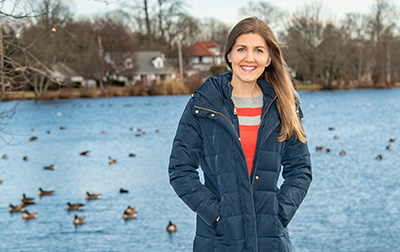 For just those reasons, Marielle Falletta came to Dr. Sisti after being diagnosed with an acoustic neuroma in 2015. A young mother with a nine-week-old-daughter, she awoke one day with numbness in her tongue, cheek, and left side of her face. “I thought I was having a stroke,” says Ms. Falletta. An MRI scan confirmed the presence of a large acoustic neuroma. “When I met Dr. Sisti, I just knew that he would be my surgeon. I felt very comfortable with him.”

A vestibular schwannoma pressing on the trigeminal nerve required Dr. Sisti to perform a craniotomy via the retrosigmoid approach and microsurgically remove as much of the tumor as possible while still preserving facial function. In fact, Dr. Sisti and his colleagues reported in the November 2011 issue of the Journal of Neurosurgery on their study that showed a combination of facial nerve-sparing microsurgical resection and Gamma Knife surgery for expansion of any residual tumor provided excellent facial nerve preservation rates in patients with recurrent vestibular schwannoma.

Hearing is the one area that is least controllable by a surgeon, notes Dr. Sisti. “The facial nerve has a regenerative capacity, while the cochlear nerve does not. Leaving the nerve intact, however, does leave open the possibility for an MRI compatible cochlear implant.”

“I knew there was a good chance of losing my hearing in my left ear, which I did. However, after surgery my life went back to normal,” says Ms. Falletta. At six months, she returned for a follow-up visit with Dr. Sisti. An MRI scan showed a bit of growth on the residual tumor. “Six months later it had grown a bit more, so Dr. Sisti performed Gamma Knife radiosurgery to halt any further growth.”

“My dream goals for my patients are to remove as much tumor the first time so that they only need to have one surgery,” says Dr. Sisti. “If we’ve reduced the tumor to a size where we can watch it, I prefer to do that. If we do have to go back with Icon, as with Ms. Falletta, who had lost her hearing, we can do it in one session. For patients who still have hearing, we can break it up over several sessions of treatment to try and save the hearing.”

Today, Ms. Falletta is doing very well with no side effects or symptoms. “I have Dr. Sisti to thank for that,” she says.