Applying Focused Ultrasound to Facilitate Drug Delivery to the Brain

The hippocampus and entorhinal cortex play a crucial role in memory processing and learning and are especially vulnerable to damage at the early stages of Alzheimer’s disease. This suggests that they could also serve as a meaningful therapeutic target. However, addressing the pathology and dysfunction in these complex deep brain structures requires traversing the ever-challenging blood-brain barrier (BBB).

Michael G. Kaplitt, MD, PhD, Vice Chair of Research and Director of the Movement Disorders and Pain Service in the Department of Neurological Surgery at Weill Cornell Medicine, pioneered the use of high-frequency focused ultrasound (FUS) for the successful treatment of essential tremor and continues to research a number of experimental applications of this technology.

Among these investigations is the use of low-frequency focused ultrasound to provide an opening in the blood-brain barrier to treat patients with Alzheimer’s disease. A study by Dr. Kaplitt, Ali Rezai, MD, of West Virginia University, and a team of researchers from the United States and Israel involved magnetic resonance guided focused ultrasound (MRgFUS), which utilizes a transducer helmet with multiple ultrasound sources converging energy of varying intensity and frequency to a precise focal point in the brain. The researchers injected microscopic bubbles into the bloodstream of six patients with early Alzheimer’s disease then directed beams of focused ultrasound to the hippocampus/entorhinal cortex, causing the microbubbles to oscillate and undergo acoustic cavitation that then induced a transient opening of tight junctions in capillaries that opened the BBB. 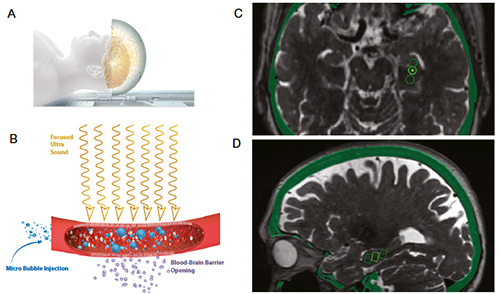 Illustration of the FUS process. (A) The ultrasound system consists of a helmet with 1,024 ultrasound transducers attached to the MRI table. (B) Ultrasound beams travel transcranially to the target and interact with the IV administered microbubbles. (C) Axial slice image of three targets in the hippocampus are represented by circles. (D) Estimated targeting volumes are represented as rectangles on the sagittal slice.
(Proceedings of the National Academy of Sciences USA)

In this prospective, phase 2 clinical trial, the six participants (five females and one male, ages 55 to 73 years old), underwent a total of 17 treatment sessions of focused ultrasound. The authors note that an MRI following the procedure revealed immediate and sizable hippocampal parenchymal enhancement indicating the BBB opening, followed by its closure within 24 hours. The average opening was 95 percent of the targeted FUS volume, which corresponds to 29 percent of the overall hippocampus volume. Cognitive assessments 30 days post-treatment showed no clinically meaningful changes linked to the procedure. In addition, no adverse effects or neurological changes related to MRgFUS were found up to 15 months after the treatment.

The study validates that focused ultrasound is a non-invasive technique that can temporarily “open” the blood-brain barrier and may make it easier for promising therapies to enter the brain to treat individuals with Alzheimer’s disease. Results of the study were published in the April 28, 2020 issue of the Proceedings of the National Academy of Sciences USA (PNAS).

In a corollary study of the same cohort of six patients, Dr. Kaplitt and his colleagues sought to clarify the effect of FUS BBB on reducing β-amyloid plaque in humans. Studies in animal models had previously shown FUS disruption of the BBB alone resulted in a reduction in β-amyloid plaque burden. Their report presents the first human results of the effects of opening the BBB on the reduction of β-amyloid plaque in the hippocampus and entorhinal cortex.

Each patient underwent a PET scan at baseline and one week after the completion of the third FUS treatment (60 days interval). In their PET analysis, the researchers used the untreated contralateral hippocampus as the control. Post-procedure, a reduction in β-amyloid deposition was evident on the treated side in all six participants.

The encouraging preliminary results from both studies indicate the opening the blood-brain barrier via focused ultrasound is not only feasible and safe, but may induce reduction in β-amyloid plaque burden.

“The rapid evolution of focused ultrasound is astounding,” says Dr. Kaplitt. “Our demonstration that we can safely, efficiently, and temporarily open the blood-brain barrier over most of a complex structure in the brain, without affecting any other area, may revolutionize our ability to deliver restorative therapies for brain disorders without invasive surgery.”

With the use of ablative high-intensity focused ultrasound (FUS) demonstrating therapeutic success for metastatic bone disease and prostate cancer, faculty in the Departments of Radiation Oncology, Neurological Surgery, and Biomedical Engineering at Columbia University Irving Medical Center recently explored the application of the technology to overcome the blood-brain barrier (BBB) for drug delivery in the treatment of glioblastoma. Despite many attempts to break through the BBB to treat glioblastoma (GBM), it remains a major obstacle for administering systemic therapies and, in particular, to allow adequate treatment of microscopic spread.

The Columbia research team hypothesized that an FUS-mediated BBB opening can enhance the delivery of etoposide for a therapeutic benefit in GBM, and undertook a study to investigate its effects on local tumor growth and overall survival. Etoposide is an anticancer chemotherapy drug widely used in the treatment of various types of cancers because of its ability to inhibit topoisomerase II and induce DNA strand breaks.

Using a syngeneic GBM mouse model, the team treated the mice with FUS and microbubbles to open the BBB to enhance the delivery of systemic etoposide. Magnetic resonance imaging was used to evaluate the BBB opening and tumor progression. 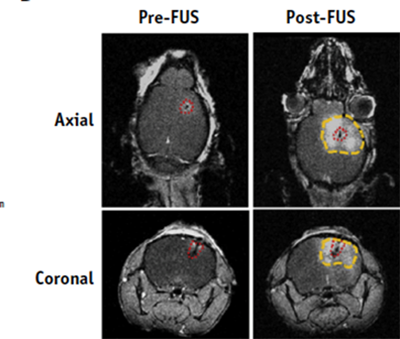 The authors note that MRI and passive cavitation detection demonstrated the safe and successful use of focused ultrasound to open the blood-brain barrier. The combined treatment decreased tumor growth by 45 percent and prolonged median overall survival by six days representing a 30 percent increase. The FUS-mediated BBB opening increased the brain tumor-to-serum ratio of etoposide by 3.5-fold and increased the etoposide concentration in brain tumor tissue by 8-fold compared with treatment without ultrasound. 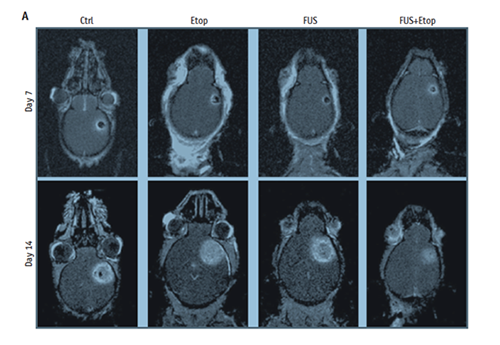 As indicated by T1-weighted contrast-enhanced images of mice taken 7 and 14 days after tumor implantation, therapeutic efficacy and delivery of etoposide was enhanced by FUS in GBM tumor-bearing mice.
(International Journal of Radiation Oncology • Biology • Physics)

Importantly, the study establishes a rationale to progress to testing the combination of focused ultrasound and etoposide in patients with glioblastoma, providing the potential for focused ultrasound to offer a new pathway for noninvasive drug delivery to infiltrative tumors in the brain.

Currently, Cheng-Chia Wu, MD, PhD, radiation oncologist, and his team have partnered with Stergios Zacharoulis, MD, pediatric neuro-oncologist, and Neil A. Feldstein, MD, pediatric neurosurgeon, to explore the use of FUS in the setting of fatal pediatric brainstem tumors (Englander et al.). These results have since led to the FDA approval of the world’s first pediatric clinical trial using FUS to open the blood brain barrier (NCT04804709). Unlike other cancer centers, the intersection of NewYork-Presbyterian/Columbia University Irving Medical Center and the resources of the Columbia University campus creates novel opportunities for interdisciplinary collaboration to advance cancer care.