As a neurosurgeon specializing in minimally invasive and complex spine surgery at NewYork-Presbyterian/Weill Cornell Medical Center, Michael S. Virk, MD, PhD, has operated on his fair share of patients with devastating spinal cord injuries. In surgery, his goal is to repair structural integrity, decompress the spinal cord, and provide patients with an optimal chance for recovery. As a scientist, Dr. Virk is seeking to devise new approaches that can overcome the functional and motor losses that are unable to be recovered in the operating room. His clinical and research goals are indeed complementary and his work in cervical spinal cord mapping and paired brain-spine stimulation for patients with spinal cord injury is steadily gaining traction. 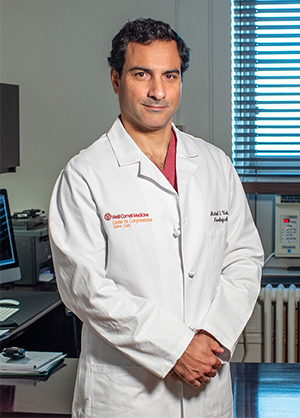 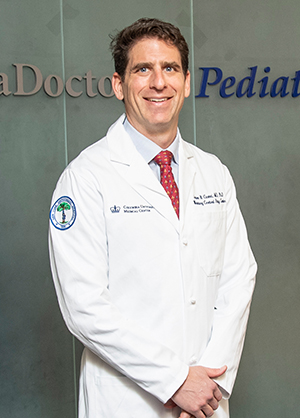 When the field of epidural electrical stimulation began to take hold about three years ago, Dr. Virk had a fortuitous encounter at a meeting on spinal cord injury with Jason B. Carmel, MD, PhD, a motor system neuroscientist interested in central nervous system injury and repair. Dr. Carmel, who is also a child neurologist at NewYork-Presbyterian/Columbia University Irving Medical Center, has particular expertise in corticospinal injury and response to activity-based treatments. Today, Dr. Virk and Dr. Carmel are collaborators investigating the role of electrical stimulation to improve motor function in patients with spinal cord injuries with myelopathy. Their current emphasis is on loss of hand function, a common denominator of cervical spine injuries.

“When we talk about cervical spine, the goal is restoration of hand function, which comprises both sensory and motor deficits,” says Dr. Virk. “This has been addressed in a number of ways, largely involving non-invasive transcutaneous electrical stimulation to activate motor circuits by pairing them with residual non-injured spinal circuits – even in complete spinal cord injuries – to restore some motor function.”

The research by Dr. Virk and Dr. Carmel departs from this approach, starting with an experiment in a rat model by Dr. Carmel using transcortical electrical stimulation over the motor cortex to activate the corticospinal tract. This was then paired with electrical simulation delivered in the epidural space of the spinal cord at the C5/6 level where the motor evoked potential is measured.

“Essentially this experiment was to pair cranial stimulation with epidural spinal stimulation and measure their combined effect on the motor response,” explains Dr. Virk. “Three very interesting findings informed our future work: The pairing of cranial and spinal simulation had an effect on the motor response, augmented the response, and, if you change where you are delivering the spinal epidural component you can make it larger. For example, if you zero in on the contralateral dorsal root entry zone you will see some potentiation, but it's larger if you move to the midline to deliver the stimulation, and significantly augmented at the ipsilateral dorsal root entry zone.”

In an experimental model, cranial stimulation paired with ipsilateral dorsal root entry zone stimulation at the level of the cord has the most significant effect on augmenting the response that is measured in muscle.

With these findings in the rat model, would Dr. Virk and Dr. Carmel be able to pair transcranial and spinal cord stimulation in humans to augment motor responses?

While planning for their clinical study, however, they realized that epidural spinal cord stimulation in humans had not yet been characterized to any extent. “We needed to have a lot more information before starting our research on the pairing of the two techniques in patients,” notes Dr. Virk. “This is when we turned to spinal cord mapping, which was not among our initial goals. A large part of the mapping is to inform our decision-making on setting the threshold in the experiments needed for plasticity. So, we reprioritized to first define regional specificity related to epidural stimulation, including both local circuitry and circuity in the segmental organization.”

A cervical cord mapping protocol was introduced to aid in performing paired stimulation.

“This data needed to be integrated with the actual pathology,” continues Dr. Virk. “While we have a lot of ideas about the pathophysiology, there are still many questions with respect to the injury itself. Finally, and of course importantly, what is the effect of surgical decompression and how does that change or preserve the electrical responses? We know that surgical decompression is effective for spinal cord injury and for myelopathy, but we don't really understand exactly how it influences signaling through the spinal cord. We are now working on how to standardize the extent of compression so it can be better studied in relation to local stimulation.”

Having moved into the clinical study phase, patients enrolled to date are those who have had posterior decompressions – laminectomy or laminoplasty – for cervical spondylotic myelopathy, with an expectation of including patients undergoing anterior procedures, specifically anterior cervical discectomy and fusion (ACDF) and corpectomy.

“We use handheld bipolar electrodes for the epidural stimulation and standard neuromonitoring techniques to find a threshold of stimulation intensity that gives us a response in the muscle we are measuring,” says Dr. Virk. “We measure all the muscles with every stimulation, but at C7, we would expect to see a response in the hands, triceps, and biceps. Once we identify a threshold from the midline, we use the exact same approach in the lateral position, and then we march north. Our threshold is defined as the stimulus intensity that will give a motor response 50 percent of the time.”

Dr. Virk and Dr. Carmel enrolled 15 patients in the study of which 12 had responses and were included in the summary of findings. “In the majority of the patients, the triceps gave reliably the most vigorous response,” says Dr. Virk. “Comparing medial to lateral stimulation as measured in the triceps, there was a significant bias toward lateral stimulation generating greater motor evoked potentials. Now that some of the findings identified in animal models have been recapitulated in humans, we believe that stimulating over the dorsal root entry zone and recruiting that circuit of the central afferent to the motor neuron elicits a larger evoked potential than midline stimulation.”

Dr. Virk, Dr. Carmel, and their colleagues at Weill Cornell Medicine and Columbia continue to navigate the complexities of spinal cord injuries and their consequences to find a course to optimal recovery of motor function for patients. The next phase in their compelling research is to take the results of their work thus far into a multi-institutional collaborative initiative.