At the Youth Anxiety Center, we are engaged in multiple translational projects involving mouse and human studies. These studies are linked to establish a structure of testing multiple hypothesized targets and drugs based on mechanism. To accomplish this structure, basic neuroscientists partner with clinical researchers to use what we learn from the brain circuits in animal studies that underlie anxiety and repetitive behaviors to make strategic hypotheses treatments that might work in people.

The following are examples of past and current research projects funded by the Youth Anxiety Center.

During adolescence there is a sensitive period considered to be a peak period in the emergence of mental illness, in particular, anxiety disorders. By understanding these sensitive periods of development when the brain is especially receptive to the environment, we may be able to understand shifts and early closures of these windows to potentially expand them behaviorally and/or pharmacologically.

Dr. Francis Lee and his colleagues have been studying the brain circuits underlying fear and have shown in both mice and in humans that adolescents have diminished capacity to extinguish fear responses relative to younger or older age groups. The next step is to develop treatments targeted to the adolescent brain to maximize effectiveness. Such an approach will allow for more precision in targeting clinical treatments by the age of the individual, and together with policies for modifying the environment, will ultimately diminish the high psychological and economic toll of mental illness on young people, their families and society.

There has been growing clinical and research attention to the unique developmental stage of emerging adulthood. This stage is a time of significant change and growth for all individuals, as it includes identity exploration, emotional, behavioral, and financial independence from caregivers, and completion of educational or vocational requirements.

While evidence-based treatments exist for both child/adolescent anxiety disorders and adult anxiety disorders, no specialized assessment or treatment methods have been established for the unique period of emerging adulthood. The Launching Emerging Adults Program (LEAP) is a developmentally informed cognitive-behavioral treatment model that aims to simultaneously reduce anxiety symptoms and promote independence.

Examining what causes pathological anxiety in humans: DTI and resting state fMRI data from individuals with and without OCD. Investigators: Rachel Marsh PhD, X He, PhD

This research uses two specific types of neuroimaging – Diffusion Tensor Imaging (DTI) and resting state imaging – and compares results between non-OCD subjects, OCD subjects not on medication, and OCD patients on medication. Ultimately these studies may identify bio signatures of OCD that could become targets for new treatment development.

A test of a potential biomarker for exposure therapy outcome across development in anxious youth. Investigators: Michael Wheaton, PhD

Anxiety disorders typically begin in childhood or adolescence, have a high lifetime of prevalence, and when inadequately treated become chronic. Exposure therapy for anxiety and related disorders is an intervention with proven efficacy, yet for a significant percentage of treated individuals is not sufficient to achieve remission. The aim of this study is to expand our understanding of developmental differences in extinction learning and explore the potential impact on the efficacy of exposure therapy across development.

The first-line psychotherapy for OCD is cognitive-behavioral therapy consisting of exposure and response prevention. However, some individuals are not helped by this treatment or experience a minimal reduction in symptoms. This study examines the effectiveness of exposure therapy across development in an effort to identify potential bio-behavioral markers of exposure therapy and outcomes in patients with childhood anxiety disorder. A treatment-specific biological marker (biomarker) could assist clinicians by identifying individuals for whom alternative treatment is necessary, personalizing medical care, and maximizing resource allocation.

With the goal of generating novel findings of the highest public health significance for young adults with anxiety disorders, we are conducting secondary data analyses of population-based, longitudinal datasets. Specifically, we are focused on elucidating (a) the phenomenology and course of anxiety disorders in young adulthood, and (b) patterns of mental health treatment, given the substantial disparities in care observed among young adults. 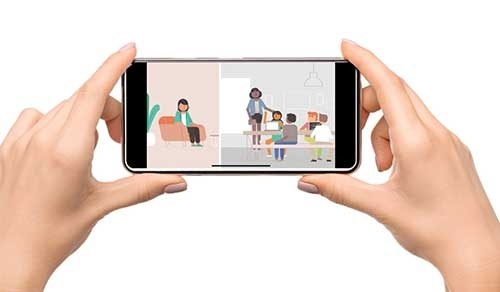 The Youth Anxiety Center is studying a new mobile app meant for treating anxiety in young adults. The app is based on cognitive behavioral therapy, an evidence-based treatment for anxiety. Interacting with the app involves watching videos about anxiety, practicing exercises to target challenging thoughts and behaviors, and using relaxation and coping techniques.

Informing this research, they have recently published a review of techniques to increase engagement with smartphone apps for anxiety and depression. Read the full review in Nature Portfolio Journal.