Stroke is the leading cause of serious long-term disability in the United States, and according to the Stroke Awareness Foundation, of the more than seven million stroke survivors nationally two-thirds are currently disabled. Physicians in the Department of Rehabilitation and Regenerative Medicine at NewYork-Presbyterian/Columbia University Irving Medical Center and in the Department of Rehabilitation Medicine at NewYork-Presbyterian/Weill Cornell Medical Center continually seek to improve recovery and rehabilitation treatments for individuals living with the after-effects of stroke.

The Evolving Role of Robotics

In partnership with Columbia’s Mechanical Engineering research scientists, they are combining rehabilitation and engineering perspectives to develop and test assistive devices that serve as therapeutic tools and also enable stroke patients to continue meaningful exercises.

Chronic stroke patients with hemiparesis often experience functional disuse of their hand and approximately 50 percent of survivors with upper limb paralysis continue to experience functional deficits four years after stroke. Studies have shown that highly repetitive and task-specific training is very helpful in upper limb recovery, however, there are obstacles that can prevent patients from undergoing this type of rehabilitation program, including visiting therapy clinics, insurance and reimbursement limitations, and lack of access to therapists with specialized training. 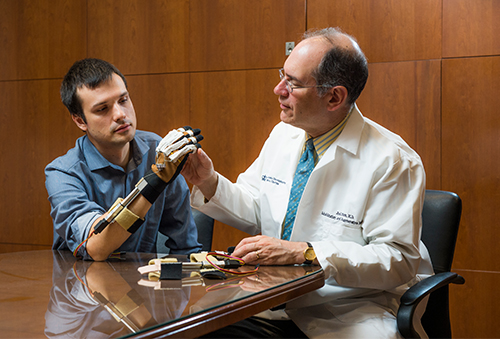 Robotic devices assist in increased upper limb repetitions for post-stroke rehabilitation but primarily target proximal segments of the shoulder and elbow. Studies with these devices have shown that robotic training produces improved function in the proximal joints. They also have found a disparity of motor recovery between proximal and distal joints that leads to detrimental compensatory grasp patterns.

To address this disparity, Columbia Rehabilitation and Regenerative Medicine specialists and their Mechanical Engineering colleagues have developed a robotic orthosis designed to assist the paretic hand after stroke. The wearable and fully user-controlled device serves as a therapeutic tool that enables patients to perform device-mediated hand exercises for neuromuscular function recovery, as well as an assistive device for use in everyday activities.

The device aims to address weakness, spasticity, poor coordination, and a flexor synergy pattern. While individuals may be able to actively flex their fingers to form a gross grasp, they are unable to extend their fingers to release the grasp. This could be accomplished by providing mechanical assistance for finger extension via a small motor relying on effective force transmission mechanisms. By assisting finger extension, individuals can employ their residual function and incorporate their impaired hand into a functional grasp and release task. A subset of patients can open and close the hand when the orthosis is used in conjunction with a commodity electromyography armband.

In the October 2020 issue of IEEE Transactions on Neural Systems and Rehabilitation Engineering, the team presented the clinical outcomes of their pilot study designed as a feasibility test for their hypotheses. The researchers’ goal was to determine if increased competence using the device from a month-long training program leads to increased performance in tasks that require grasp, transport, and release of objects while wearing the device. 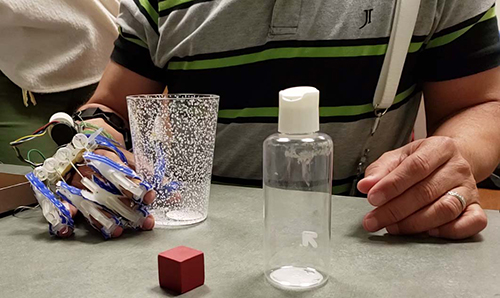 Eleven chronic stroke patients with moderate muscle tone underwent a month-long training protocol using the orthosis. The 12-session training program, comprising three sessions per week for four weeks, involved 30 minutes of training time in which the participants practiced a variety of grasp and release tasks with everyday objects and were then evaluated with a battery of clinical assessments pre- and post-intervention. Fugl-Meyer post-intervention scores without robotic assistance showed improvement focused specifically at the distal joints of the upper limb. Action Research Arm Test (ARAT) scores post-intervention with robotic assistance showed that the device may serve an assistive role in grasping tasks.

The authors note, however, that while trends in the data suggest this device might serve two distinct purposes – rehabilitation or assistive – for different subsets of the stroke population, the results also highlight limitations and point towards possible areas for future improvements, including longer training periods. 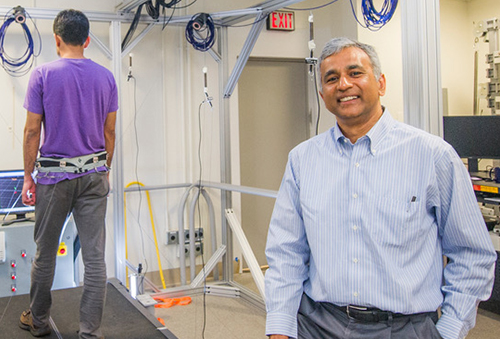 C-ALEX provides the same type of feedback as traditional rigid-link exoskeletons without imposing restrictions on the user’s natural degrees-of-freedom. Three cuffs connected by cables are worn at the user’s pelvis, thigh, and calf. The cuff locations and cable routing points are described in reference to the user’s hip and knee joints, which allows the C-ALEX system to continuously track the configuration of the leg and the cable vectors in real time. The intervention aims to increase step length and step height through generated target trajectories. 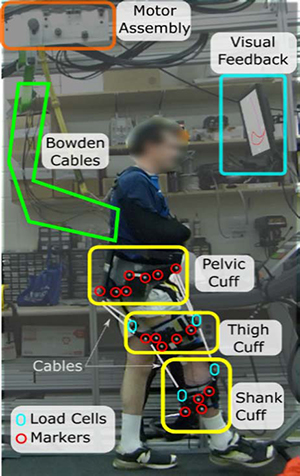 A participant demonstrates the C-ALEX system with all modules highlighted. A harness to harness is provided to prevent potential falls.

The controller can be programmed to continuously provide force assistance to the limbs during the gait cycle. The user’s ankle trajectory is tracked and compared to a prescribed target trajectory. The magnitude of the force provided varies according to the user’s ability to track this trajectory. This approach enables the person to develop a personalized plan to adjust to the new target trajectories, rather than passively follow a prescribed leg trajectory, and is designed to give the user full kinematic freedom.

In the September 2020 issue of IEEE Transactions on Neural Systems and Rehabilitation Engineering, the researchers presented results of a study to assess the ability of C-ALEX to prompt a change in the walking patterns of 10 post-stroke participants using a single-session training protocol.

The ability of C-ALEX to accurately provide forces and torques in the desired directions was evaluated to compare its design performance to traditional rigid-link designs. The researchers observed a significant effect on the normalized step height and normalized step length of the participants when comparing baseline to training and early post-training sessions. They also noted secondary effects such as the changing of the angular profiles during gait, especially when considering hip flexion peaks and their timing.

The study showed the preliminary utility of using a non-rigid exoskeleton for gait training with a closed-loop kinematic controller and its ability to encourage gait adaptation in a short amount of time. The Columbia team noted that the non-restrictive nature of the exoskeleton as well as the use of an assist-as needed intervention is promising for more long-term and specific gait training interventions.

A treatment approach that has been used to treat uncontrollable epilepsy for more than 20 years has now assumed a potentially important role in upper extremity recovery from stroke. According to a study recently published in The Lancet, vagus nerve stimulation (VNS), when paired with traditional rehabilitation therapies, is showing promise as a treatment option for patients who have long-term moderate-to-severe arm impairment following an ischemic stroke. 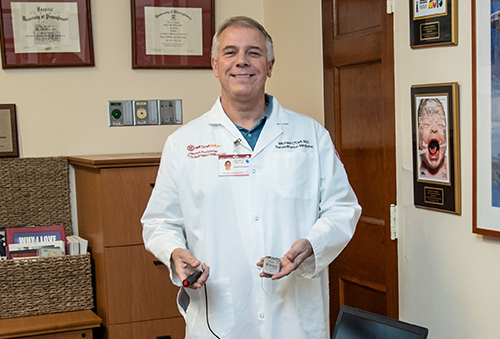 “There have been relatively few proven treatments in stroke recovery,” says Michael W. O’Dell, MD, Professor of Clinical Rehabilitation Medicine, Department of Rehabilitation Medicine at Weill Cornell Medicine. “While constraint-induced movement therapy appears to be very effective, it is difficult to provide the intensive therapy that is needed because it requires a huge amount of time and effort on the part of the patient in terms of exercise. So we have few methods available, particularly in chronic stroke, that we can offer.”

Dr. O’Dell, in collaboration with neurosurgeon Theodore H. Schwartz, MD, Director of the Center for Epilepsy and Pituitary Surgery at NewYork-Presbyterian/Weill Cornell, participated in a pivotal, randomized, triple-blind, sham-controlled trial of VNS conducted in 19 stroke rehabilitation services in the United States and United Kingdom.

“The concept was originally tested in an animal model, which suggested that stimulation of the vagus nerve affects different neurotransmitter systems in the brain, particularly acetylcholine and norepinephrine and demonstrated that the release of these neuromodulators strengthens the neural connections during the rehabilitation exercises, making rehabilitation therapy more effective,” says Dr. O’Dell. “These experimental studies and initial data from a small pilot study reported in Stroke in 2018 suggested that if the vagus nerve is stimulated while someone is doing an exercise, it may improve the recovery of upper extremity weakness. The theory was that the patient still had to exercise, but vagus nerve stimulation could enhance the efficacy of that exercise. These findings paved the way for the larger multicenter trial.”

Participants in the current trial had moderate-to-severe arm weakness and were at least nine months post ischemic stroke. All 108 patients were implanted with the Vivistim neurostimulation device – 53 were randomly assigned to the VNS group and underwent rehabilitation paired with active vagus nerve stimulation and 55 were assigned to the control group, which received rehabilitation paired with sham stimulation. The pacemaker-size device is implanted under the skin of the chest and is programmed to deliver pulses or stimulation at regular intervals. 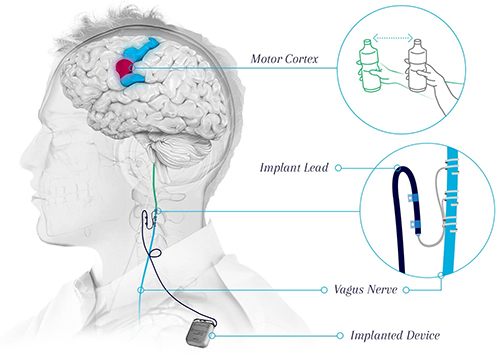 With the Vivistim Paired VNS™ System, each time the vagus nerve is stimulated, it sends a signal to the brain, which triggers the release of neurotransmitters broadly across the brain, including the motor cortex, thus enabling neuroplasticity to increase motor function.
(Courtesy of MicroTransponder®)

On the first day after completion of in-clinic therapy, the mean Fugl-Meyer Assessment for upper extremity (FMA-UE) score increased in the VNS group by 5.0 points and in the control group by 2.4 points. Ninety days after in-clinic therapy, a clinically meaningful response on the FMA-UE score was achieved in 23 of the 53 patients (47 percent) in the VNS group versus 13 of 55 patients (24 percent) in the control group. In addition to the FMA, the Wolf Motor Function Test provided a basic measure of semi-functional activities in the arm, such as grasp and release, reaching to your mouth, and other practical aspects of daily living.

“It is extremely important to point out that the device is used in conjunction with fairly intense occupational therapy 90 minutes, three times a week for six weeks followed by a home exercise program,” says Dr. O’Dell. “The study found that those individuals who had the VNS device turned on had substantially higher scores on the Fugl-Meyer Assessment and Wolf Motor Function Test obtained in the days following the completion of the occupational therapy and at three months later. The study not only analyzed the average change in these measures, but also specific changes that were clinically significant. For the Fugl-Meyer Assessment, almost twice as many individuals had a major change on that score as the placebo group, and for the Wolf Motor Function, nearly three times the number of patients in the VNS group had an excellent response. This is a big deal because we have so few treatments for upper extremity recovery following a stroke and this approach may prove to fill that gap.”

Dr. O’Dell also notes that the paper published in The Lancet provides a substantial analysis of the risks related to both the surgical implantation procedure and to the device. “There were very few complications and none that we didn't expect from past experience with the device or surgical placement,” says Dr. O’Dell. “The procedure is quite safe with relatively few side effects. This is a very interesting and substantial advance in the treatment of upper extremity impairment after stroke. If you consider there are between seven and eight million people in the United States living with some residual sequella of stroke, the potential pool of folks who could benefit is rather enormous.”

On August 31, 2021, the Vivistim Paired VNS™ System was granted a Breakthrough Device Designation by the FDA and will be available in targeted United States markets in late 2021, expanding nationally by the end of 2022.