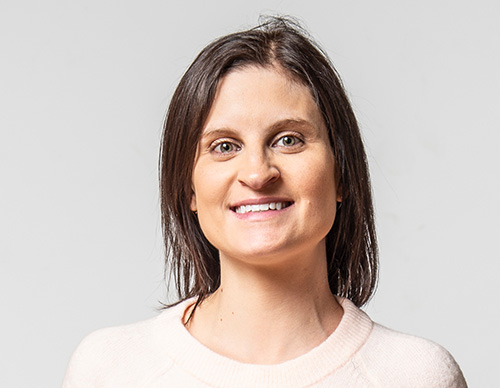 Rebecca Szymanski was getting ready for a party when she noticed she changed colors.

“I wasn’t feeling well, but I had to go to a friend’s birthday party. So, I took a shower, but when I got out and looked in the mirror, I saw everything was blue — my lips were blue, my nails were blue, I was blue,” Rebecca says. The then-33-year-old special education elementary school teacher drove herself to a nearby hospital.

“I walked into the ER and said, ‘my name is Rebecca Szymanski. I’m a congenital heart patient, I can’t breathe. I think I’m dying,’” she says.

In 1982, when Rebecca was just hours old, doctors determined she had tricuspid atresia, pulmonary atresia, and transposition of the great vessels, which meant instead of having the normal four-chambered heart, Rebecca had just three.

The four heart chambers work together to circulate blood and oxygen throughout the body. The left atrium receives oxygen-rich blood from the lungs and sends it to the left ventricle, which pumps the oxygen-rich blood to the body. The right atrium receives oxygen-poor blood from the body and sends it to the right ventricle, which pumps the oxygen-poor blood to the lungs.

Rebecca was missing the right ventricle. When she was just 30-hours-old, doctors performed heart surgery to implant a heart shunt. Her parents then took her to NewYork-Presbyterian/Columbia University Irving Medical Center. At age six, the pediatric cardiothoracic surgeons at NewYork-Presbyterian performed a Fontan procedure to restructure her heart.

With the Fontan, blood from Rebecca’s veins are diverted to her pulmonary arteries without needing to go through the right ventricle.

“With a Fontan, eventually something goes wrong. A good Fontan is said to last 20 years. Mine lasted 27 years,” Rebecca says. When Rebecca turned blue, that was her indicator that something was wrong with her Fontan.

At the emergency department of her local hospital, doctors determined she had below normal oxygen levels in her blood due to two massive blood clots in her Fontan blocking blood to her lungs. Her cardiologist Dr. Marlon Rosenbaum — the director of the Schneeweiss Adult Congenital Heart Center — was called, and Rebecca was transferred to NewYork-Presbyterian.

Dr. Rosenbaum and his team of adult congenital heart specialists spent several weeks trying to determine what the best course of treatment for Rebecca was. At the time, he saw only three options — continue to manage her condition with medication, perform a revised Fontan procedure, or place her on the heart transplant list.

“Dr. Rosenbaum decided sending me home with the same medication I was already on was not an option, because if this happened again, I wouldn’t be so lucky,” she recalls. “Everyone thought I should have the transplant.”

The pressure from Rebecca’s heart was destroying her liver. Her doctors wanted to avoid the need for a liver transplant, as well. After consulting Dr. Robert Brown, a liver specialist, Dr. Rosenbaum decided performing an updated Fontan procedure would be Rebecca’s best option.

The next day, Dr. Emile Bacha — the director of the Congenital and Pediatric Cardiac Surgery program at NewYork-Presbyterian Morgan Stanley Children’s Hospital — performed the revised Fontan. About two weeks later, Rebecca was discharged from the hospital.

“Dr. Rosenbaum is my favorite person in the world. He orchestrated a team that saved my life,” she says.

Though she’s somewhat limited in what physical activities she can do, Rebecca says she’s back to normal. “You wouldn’t know I have this condition by looking at me, I look OK. My skin is fine. I can walk around and shop for hours and take long walks. I just can’t do anything competitively,” she adds.

Since the surgery, Rebecca has gone back to work and her regular activities. She follows up with Dr. Rosenbaum every few months. Even between visits, she says she’s likely to hear from her provider.