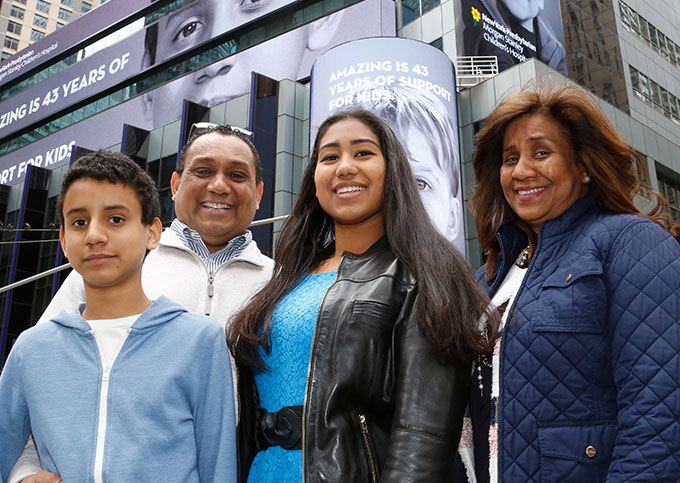 "There's always a cure to something. We might not have found it. But if you look, you can probably find a cure."

Matthew was diagnosed at birth with sickle cell disease — a condition that affects red blood cells carrying oxygen to various parts of the body, harming vital organs and causing infections, strokes, and anemia.

As Matthew grew, sickle cells began accumulating in his spleen, causing it to enlarge. When the hospital treating him at the time recommended organ removal at age three, his mom was determined to find another answer. She called NewYork-Presbyterian Morgan Stanley Children's Hospital and was both shocked and relieved to find out that not only was there a better way to manage sickle cell disease, but there was actually a cure. It was through bone marrow transplant. And the Sickle Cell Transplant Program at NYP is one of the largest and most successful in the tri-state area offering bone marrow transplantation.

Although siblings are usually a patient's best chance for a bone marrow match, Matthew's sister was not. By the fall of 2006, his hemoglobin levels had plummeted to dangerously low levels, requiring blood transfusions every 10 days. But Matthew soon received an umbilical cord donation — a match that would enable stem cells from the umbilical cord to grow into healthy bone marrow with no sickle cell disease.

In May 2007, Matthew underwent his bone marrow transplant with Dr. Monica Bhatia. He was in the hospital for three months receiving treatment and was pronounced completely cured of sickle cell disease one year later. Today, Matthew is a healthy, bright fourth-grader with a very positive outlook: “There's always a cure to something,” he says. “We might not have found it. But if you look, you can probably find a cure.”

Sickle cell disease is a condition that affects red blood cells carrying oxygen to various parts of the body, harming vital organs and causing infections, strokes, and anemia. We cure this disease through bone marrow transplant. A bone marrow transplant uses healthy blood-forming cells from a family member, unrelated donor, or, as in Matthew’s case, umbilical cord blood unit. Chemotherapy is used to prepare the body for the transplant and the cord blood is infused into the blood stream.