Laparoscopic Donor Nephrectomy: Continuing Refinements in the Standard of Care 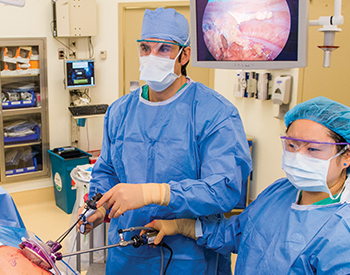 In kidney transplantation, laparoscopic donor nephrectomy is now the standard of care for living donors, a technique not widely available until the late 1990s. “The first live kidney donation, performed in 1954 in Boston, represented a significant advancement in transplant surgery, but required a large open incision,” says Joseph J. Del Pizzo, MD, Director of Laparoscopic and Robotic Surgery for the Department of Urology at NewYork-Presbyterian/Weill Cornell Medical Center. “Although this allowed family members to donate to loved ones in need if they proved to be a match, there was also a disincentive. Live donor nephrectomy was associated with a significant amount of pain and prolonged recovery time. As a result, the use of deceased donor kidneys was more common for several decades.”

With the development and refinement of laparoscopic techniques came significant advantages for donors, including lower risk of complications, reduced pain after surgery, and shorter recovery time and return to all regular activities. Today, donors who undergo laparoscopic nephrectomy are generally hospitalized for one to two nights following surgery and can return to work two to three weeks later; open nephrectomy donors usually remain in the hospital for three to five nights and do not return to work for an average of 8 to 12 weeks, or longer.

“The biggest difference we see is in return to normal activity,” says Dr. Del Pizzo, who has performed some 2,500 kidney transplants since joining Weill Cornell in 2000. “Ninety-five percent of laparoscopic donors achieve this benchmark in 28 days, while those who undergo open donor nephrectomy may take up to four months to achieve full return to normal activity.”

The reduction in obstacles to live kidney donation via laparoscopic surgery is complemented by the development of more effective immune therapy, making it possible to match more live donors to recipients. In the early days of laparoscopic surgery in the mid-1990s, 65 percent of kidneys were from deceased donors and 35 percent from live donors. Today, those numbers are reversed.

“The less the donor has to go through, the more incentive there will be to donate,” continues “Complete strangers now donate to one another, or genetic strangers, such as husband and wife — currently one of the more common transplants we do now. If you combine the improvement in immune therapy and the technological advancements of the donor operation — increased safety, less scarring, improved cosmesis, faster recovery and return to normal activity — most large centers like ours and those around the country are performing living donor transplants at a higher percentage because more people are willing to do it.”

On the recipient side, live donation also confers benefits. “Typically, more kidneys procured from living donors will function immediately and for a longer time than those from a deceased donor where the kidney may be out of the donor’s body for a day or longer looking for a match,” Dr. Del Pizzo says. “With live donors, the kidney is removed, put on ice, and then within 30 minutes can be transplanted into the recipient. There’s a higher three-year function rate of living kidneys compared to cadaveric kidneys, so we prefer a living kidney.”

While all laparoscopic nephrectomies offer these benefits to living kidney donors, Dr. Del Pizzo often employs a surgical technique that represents another advance in the past five years: laparoendoscopic single site (LESS) surgery. “The standard laparoscopic technique involves three or four small incisions in addition to the two-to-three-inch incision needed to remove the kidney. In many cases, with single-site laparoscopy we’re able to operate through the two-to-three-inch incision only,” he explains. Results of a randomized prospective analysis conducted at the hospital showed not only a slightly reduced recovery time, but also better cosmesis and increased patient satisfaction.

Dr. Del Pizzo has also evaluated the use of robotic technology for live donor nephrectomy but has found that it does not offer an added benefit to standard laparoscopic surgery. “In my opinion the robot is better utilized for reconstructive urologic surgery, for example, when we take part of a kidney out due to a tumor and are then left with a defect in the remaining part of the kidney. The robot can be used to close that defect,” he says.

With any laparoscopic nephrectomy, donors need to remain aware that if complications develop, such as bleeding, an open nephrectomy may become necessary. However, this is rare — occurring in fewer than one percent of cases. A finding of excessive scar tissue in the patient’s abdomen may also dictate the need for an open surgery. “This can occur when a patient has had previous intra-abdominal surgery,” says Dr. Del Pizzo.

The possibility of complications occurring underscores the need for new surgeons to be trained in both procedures, notes Dr. Del Pizzo. “I’m a firm believer that you really can’t do laparoscopic surgery effectively if you’re not trained in open surgery. When I trained, we did mostly open surgeries, but we were pioneers in laparoscopic surgery. Now laparoscopic surgery is part of most resident training programs, and there is typically a higher volume of minimally invasive surgery compared to open surgery. This can present a challenge when teaching our future leaders in surgery. Fortunately at Weill Cornell Medicine, our residents get extensive training in open surgery for more complex cases. In addition, they rotate through Memorial Sloan Kettering Cancer Center, where they do a lot of open surgery, and therefore are exposed to the gamut of urologic procedures.”

End-stage renal disease is on the rise, contributing to a long waiting list for kidney donors. Patients waiting for a kidney must often rely on dialysis for prolonged periods, increasing both the cost of care and associated morbidity. Efforts to encourage live donation include promotion of donor exchanges in which pairs of family members or spouses are matched with other such pairs for a “swap.” The Kidney Transplant Program at Weill Cornell has helped facilitate such exchanges.

In recent years a number of altruistic donors have come forward — those without any direct relationship with the recipient and in some cases this has initiated a “transplant chain” leading to a series of successful transplants. Once the chain is initiated by an altruistic donor, someone in that individual’s life then donates to another person in need thus continuing the donor-recipient chain. One of Dr. Del Pizzo’s former patients, the father of a transplant recipient, became involved in this cause and established the National Kidney Registry after he was unable to donate to his daughter at the time of her transplant but was willing to donate to someone else in need in order to help her.