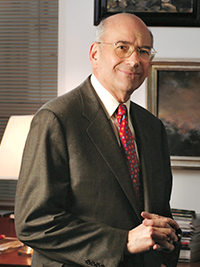 In June 2017, Jack D. Barchas, MD, stepped down as Chairman of the Department of Psychiatry at Weill Cornell Medicine, a position he held for 25 years. Dr. Barchas, who continues as a faculty member of the department, became Chairman and Psychiatrist-in-Chief at NewYork-Presbyterian/Weill Cornell Medical Center in 1993. During his tenure, Dr. Barchas integrated the Manhattan and Westchester campuses, thereby advancing the excellence of both programs and establishing a comprehensive and nationally recognized psychiatric program. The Weill Cornell psychiatric program, which integrates developmental neurobiology, developmental psychobiology, and multiple treatment approaches, is respected for its excellence in clinical care, research, and education. NewYork-Presbyterian Westchester Division is the only freestanding psychiatric hospital in America that has achieved Planetree designation in recognition for the outstanding work it does to support and enhance the patient experience.

An outstanding clinician and researcher, Dr. Barchas is noted for basic, translational, and clinical discoveries regarding neurotransmitters and hormones such as serotonin, melatonin, epinephrine, norepinephrine, dopamine, and peptides including some endorphins. His work focuses on how behavior changes neurochemistry and how those changes influence subsequent behavior.

As a medical student, he provided the first demonstration that neurotransmitters are differentially altered by stress. Later research with extraordinary trainees and colleagues focused on their formation, metabolism, molecular genetics, localization, and roles in behavior and mental disorders. Dr. Barchas is respected for his efforts in developing talent at all levels, and has authored more than 300 publications and served as a contributing editor to an influential textbook of psychopharmacology.

Dr. Barchas has earned recognition from professional societies in psychiatry, psychology, and neuroscience ranging from biological to psychosocial areas, including honorary membership in the American Psychoanalytic Association. He received the Sarnat International Award in Mental Health from the National Academy of Medicine (formerly the Institute of Medicine) for his contributions to the study of neurobiology and emotional behavior; the Walsh McDermott Medal for service; and the Distinguished Alumni Annual Award from Yale’s Department of Psychiatry. Dr. Barchas is a founding member of the Scientific Board of the Brain and Behavior Research Foundation, chairing its Distinguished Investigator and Goldman-Rakic Award Committees.

Dr. Barchas served as President of the New York Psychiatric Society and was the first Chair of the MacArthur Network on Depression. He served as Chair of the Board of Directors of the New York Academy of Medicine for four years, receiving its award for distinguished service and its Salmon Medal for Research.