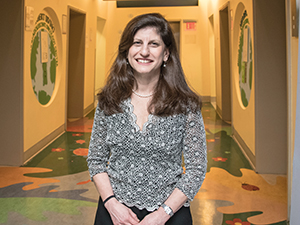 The pediatric oncology program at NewYork-Presbyterian/ Columbia is one of the front-runners nationally instituting and implementing real-time precision oncology for patients, including the establishment in 2014 of a precision-in-pediatric sequencing program called the PIPseq Cancer Program. Led by Julia L. Glade Bender, MD, Associate Director, Pediatric Hematology, Oncology, and Stem Cell Transplantation, and Medical Director for PIPseq, the program works to identify the molecular drivers of each patient’s cancer and use this information to personalize his or her treatment using novel, biologically targeted investigational agents.

Columbia is among only a handful of institutions nationwide providing a comprehensive sequencing platform for pediatric patients that includes not only the DNA code (whole-exome), but also the RNA message which informs protein expression (RNA-seq). In 2016, PIPseq received funding from the Sohn Conference Foundation to provide this clinical testing to any child with a high-risk cancer in the New York, New Jersey, Connecticut area. And, in 2018, the program will begin integrating the OncoTarget™ and OncoTreat™ methodologies originally developed for the adult N-of-1 program to interpret the RNA data.

“Through NewYork-Presbyterian/Columbia’s pediatric sequencing program, every child with a high-risk cancer that comes to Columbia undergoes whole-exome sequencing; the patient’s tumor also undergoes RNA-seq analysis,” says Dr. Glade Bender. “Half of the clinically applicable findings have come from the expression data; applying OncoTarget™ and OncoTreat™ add validity and depth to the analysis.”

Researchers at Columbia are major participants in the NCI-based MATCH trial – a nationwide effort to sequence 7,000 adult patients with different types of cancer. The MATCH trial has identified 30 different drugs correlated to the different genes of patients, making it possible for adult patients anywhere in the country to have access to treatment specific to the genetic makeup of their tumor.

The NCI-COG Pediatric MATCH trial is open for children and adolescents from one to 21 years of age with advanced solid tumors, including non-Hodgkin lymphomas, brain tumors, and histiocytoses, whose cancer has advanced while on treatment or has returned following treatment. Patients are assigned to an experimental therapy based on the genetic changes found in their tumors through genomic sequencing rather than on their type of cancer or cancer site.

“We have taken a leadership role in the NCI Pediatric MATCH trial,” says Dr. Glade Bender, who is a member of the trial’s Steering Committee. “I’m very passionate about getting more adolescents and young adults on clinical trials. In many ways, we’re using our own in-house platform to screen patients who we think are likely candidates for MATCH. If we find the genetic alterations that lend themselves to therapy in the MATCH trial, then we can get our kids access to those targeted drugs.”

The first enrollment step of the trial involves screening the patient’s tumor sample to determine if there is a genetic change that could be targeted by one or more of the drugs being studied. Researchers plan to screen the tumors of 200 to 300 patients each year, until 1,000 have been screened. Current research suggests that one out of 10 patients who enroll in the screening phase will have a genetic change that matches one of the targeted drugs undergoing testing. Patients will also undergo testing to determine whether any genetic change in their tumor was hereditary. The information gleaned can help physicians advise families about possible additional genetic testing, counseling, and follow-up.

Those patients whose tumors have a genetic change that can be targeted by a MATCH study drug may go on to the second step, which is to enroll in a treatment arm if they meet other eligibility criteria. Patients who enroll in a treatment arm will continue to receive the experimental treatment as long as their tumors are stable or getting smaller. At least 20 patients will be enrolled in each treatment arm in the testing of a different drug, all of which have been donated by pharmaceutical companies that have partnered with NCI. While the drugs are experimental in children and adolescents, they have been tested in, or in some cases approved for, adults and have shown activity against tumors with specific genetic changes.

“I’m running the trial of olaparib, which is a PARP inhibitor, and we’ll be giving that to patients who have genetic alterations in their DNA damage repair genes,” says Dr. Glade Bender. “Dr. Lee is running the erdafitinib arm that is targeting gain-of-function mutations and fusions of the genes encoding FGFR, the fibroblast growth factor receptors.”

“There are a lot more agents out there,” adds Dr. Glade Bender. “The push for the future is to figure out through biomarkers which patient needs which therapeutic approach, be it immunotherapy, chemotherapy, biologically targeted therapy, or a combination. Creating big data sets of these patients and looking at their N-of-1 experiences should help us to predict what therapy might be of greatest benefit for the next patient.”