Gene Therapy for Thalassemia and Hemophilia Comes of Age 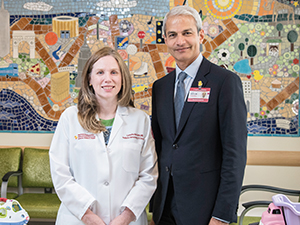 For years, therapies for thalassemia and hemophilia have managed to control these chronic diseases, and with care at comprehensive treatment centers, such as those at NewYork-Presbyterian/Weill Cornell Medical Center, patients can live to near normal life expectancies. “However, until recent break-through advances in gene therapies, there was a huge unmet need in terms of having a curative treatment for either disease,” says Sujit Sheth, MD, Chief, Pediatric Hematology and Oncology, and Director of the Thalassemia Center at Komansky Children’s Hospital at NewYork-Presbyterian/Weill Cornell. Today, Dr. Sheth and Catherine E. McGuinn, MD, Director of the Hemophilia Center at Komansky Children’s Hospital, share a tangible optimism that a cure for both conditions is well within reach.

“We have the largest population of patients with hemophilia and thalassemia between Boston and Philadelphia and follow some 150 patients in each program,” notes Dr. Sheth. “We’re able to provide all of the latest therapies and state-of-the-art care for both of these chronic conditions.”

Current treatments for hemophilia prevent patients from having bleeds and also maintain them in as normal a state as possible, says Dr. Sheth. “But they still have hemophilia. With gene therapy, we are looking at a cure.”

“Experiments in animal models for both hemophilia and thalassemia have been ongoing for at least 30 years. It’s only in the last three to five years that we are able to actually apply these findings in humans.”

As major treatment programs for thalassemia and hemophilia, the two centers have long participated in multicenter trials of new therapies. Most recently, Weill Cornell took part in an early stage, open-label, phase 1-2a study of an experimental gene therapy for hemophilia B in 10 men who had factor IX coagulant activity of 2 percent or less of the normal value. The therapy involved the infusion of a single-stranded adeno-associated viral vector – SPK-9001 – consisting of a bioengineered capsid, liver-specific promoter and factor IX Padua transgene. This gene transfer therapy goal is to have a non-pathogenic virus deliver a hyper-expressing factor IX gene to the liver, allowing consistent expression of the factor IX clotting factor to prevent bleeding.

The results, published in The New England Journal of Medicine in December 2017, showed that nine of the 10 patients did not experience any bleeding episodes after the gene therapy treatment, and the one patient who needed clotting factor because of bleeding used 91 percent less than before. Participants were followed for 52 weeks and are currently enrolled in a long-term follow-up protocol.

“The adeno-associated viral vector targets the liver and produces the coagulation protein that is missing,” says Dr. McGuinn. “It is a much easier process for the patient with a one-time infusion of SPK-9001 that results in continued expression of that factor in the bloodstream compared to standard of care with twice a week peripheral intravenous infusion of clotting factor concentrate.”

Currently, the Weill Cornell investigators are participating in a multicenter trial for patients with hemophilia A, the more common form of hemophilia. Gene therapy for hemophilia A has been demonstrated as a proof of concept in early phase clinical trials and researchers are actively screening patients for participating in ongoing studies with promising results. An abstract of the researchers’ early findings was presented at the American Society of Hematology 59th Annual Meeting in December 2017.

To date, a curative treatment for thalassemia has required hematopoietic stem cell transplantation from a matched sibling. “However, only 20 percent of patients have a matched sibling, so it is not a therapy that is available to everyone,” says Dr. Sheth. “The mainstay of treatment is transfusions, which can result in iron overload, leading to complications of hemochromatosis. Over time, this can lead to diabetes, heart disease, and various endocrinopathies. And this form of treatment heavily depends on the patient’s compliance with the therapy.”

Gene therapy trials for the treatment of beta-thalassemia began several years ago with encouraging results, notes Dr. Sheth. However, recent data presented at the American Society of Hematology meeting focused on a new approach of using a lentiviral vector to transport a functioning hemoglobin gene into patients’ hematopoietic stem cells and then transfusing them back into the patients.

“The preliminary data of the new protocol is very promising and much better than the prior study,” says Dr. Sheth. “To put it into perspective, a vector copy number indicates how many copies of the vector are present in each stem cell. A previous study had a vector copy number of .6 to .7. You need to have at least one copy per stem cell for it to work well, so at .6 or .7, it probably would not do the trick. With this new process, the vector copy number is between 2 and 3, a huge difference and the prime reason why we think it will be very successful. Treatment still requires patients to undergo a stem cell transplant, but autologous.”

“It’s very exciting to have conversations with patients where we are not talking about doing this in mice or in a primate model but are able to say that we can offer them this treatment as part of the clinical care we provide,” says Dr. McGuinn. “And now that we know that technology can deliver a new gene that can produce a protein that will function biologically, I believe this is a potential model for other diseases, such as muscular dystrophy and cystic fibrosis.”

“It’s exciting to be part of what’s happening in gene therapy and to be able to share the latest developments with our patients that I hope will improve their quality of life.”

“Experiments in animal models for both hemophilia and thalassemia have been ongoing for at least 30 years,” says Dr. Sheth. “It’s only in the last three to five years that the technology has exploded, and we are able to actually apply findings in humans. There’s been a lot of investment in technology from the biotech companies, and many trials are opening with slightly different variations of vectors and slightly different variations of genes. Based on what we know so far, in terms of safety and efficacy, I believe gene therapies will be FDA approved for hemophilia and thalassemia within three to five years.”

“To be able to offer patients with these chronic conditions a cure is incredible,” says Dr. Sheth. “Honestly, I never thought in my professional life that I would be able to say, ‘I can cure thalassemia.’ It’s not here yet, but it’s coming.”