CAR T-Cell Therapy: A Reason to Hope in Hematological Malignancy 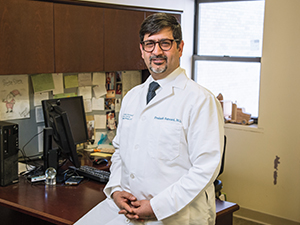 Chimeric antigen receptor (CAR) T-cell therapy engages an individual’s own immune cells to treat cancer, and, in particular, hematological malignancies. In CAR T-cell therapy, T-cells are obtained from the patient and with genetic engineering, these cells are trained to identify, attack, and kill cancer cells. With the first-ever FDA approval for a CAR T-cell therapy, (CTL019), in August 2017 for children and young adults with relapsed or refractory ß-cell acute lymphoblastic leukemia, interest in this first-in-class therapy has intensified. Developed by Novartis, Kymriah™ (tisagenlecleucel) has been tested in a number of different clinical trials in approximately 150 patients in the United States, many of who had decreases in their disease or entered a complete remission.

“This transformative treatment for cancer can help some leukemia patients who have no other options,” says Prakash Satwani, MD, a pediatric hematologist/oncologist in the Division of Pediatric Hematology, Oncology, and Stem Cell Transplantation at NewYork-Presbyterian/Columbia University Irving Medical Center. Dr. Satwani developed the CAR T-cell treatment program at Columbia for children with acute lymphoblastic leukemia. The program is one of 32 centers in the country and one of only two in New York approved by Novartis to offer this treatment.

“The FDA has established strict guidelines for eligibility for the treatment,” says Dr. Satwani. “Patients must be younger than 25 years old with refractory acute lymphoblastic leukemia. The second indication is for patients with leukemia who have undergone two separate cycles of chemotherapy, bone marrow transplant, or another treatment and the cancer has returned each time. If the patient meets these criteria, then we next want to make sure that he or she has good organ function — their lungs, kidneys, and heart all need to be in good shape before they go for this therapy.”

The process for administering CAR T-cell therapy is a rigorous one. It begins with collecting the patient’s T-cells though leukapheresis. Once the T-cells are extracted they are shipped to Novartis to be genetically engineered, which takes approximately three weeks.

“There are two parallel paths,” explains Dr. Satwani. “While the patient’s cells are with Novartis, we are preparing the patient to receive the cells. This involves administering lymphodepleting chemotherapy to help reduce the amount of leukemia cells present in the blood and bone marrow. This protocol is individualized to each patient with a goal of minimizing toxicity to enable them to receive the CAR T-cells.”

When the cells are ready, Novartis ships the cells in frozen vials to Columbia’s stem cell lab. The patient is given another round of chemotherapy to deplete any remaining T-cells. “We don’t want the patient’s own T-cells to fight the genetically engineered T-cells, so we want a very low lymphocyte level in circulation.”

The patient is then given Kymriah through IV infusion and then discharged to a location no farther than two hours from the Hospital for the next four weeks for close monitoring.

“After the first 72 hours, some patients will start to develop a fever, and nearly half will require admission to the intensive care unit,” says Dr. Satwani. “As the genetically engineered T-cells begin to fight the leukemia cells, they become very active, begin to multiply, and will release chemicals – a phenomenon called cytokine release syndrome. When cytokines are released in a very high quantity, the patient may get very sick. Novartis only chose a few centers with strong intensive care unit support to do the therapy because this cytokine release syndrome can be very severe.”

Dr. Satwani notes the success rate based on the studies that have been published indicate that 50 percent of patients will be leukemia free at one year. “What makes this so amazing,” he says, “is that the patients who are going to be treated by the CAR T-cells usually have a less than 10 percent chance of surviving. This offers a huge increase in their survival rate for leukemia-free survival.”