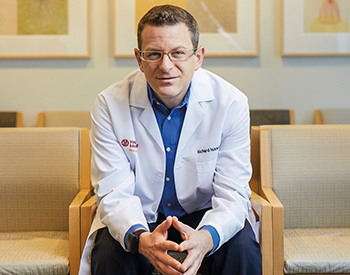 It is estimated that 47 million Americans have preclinical Alzheimer’s disease and are not yet exhibiting symptoms. This offers specialists such as Richard S. Isaacson, MD, Director of the Alzheimer’s Prevention Clinic at NewYork-Presbyterian/Weill Cornell Medical Center, a unique opportunity to intervene early on in the process.

Dr. Isaacson has four family members with Alzheimer’s disease. While his family history led to the decision to specialize in the treatment of Alzheimer’s, it also informed the way that he approached the overall management of the disease. Is Alzheimer’s primed to join other chronic diseases like heart disease and diabetes, which have modifiable risk factors? Research from population attributable risk models indicates that one out of three cases of Alzheimer’s may be preventable, and Dr. Isaacson wholeheartedly agrees.

“In 2018, we can feel more comfortable using Alzheimer’s and prevention in the same sentence because the totality of evidence demonstrates that we can reduce risk.”

“We know that Alzheimer’s disease starts in the brain 20 to 30 years before the onset of symptoms, giving physicians ample time to intervene in an individualized fashion for those at risk,” says Dr. Isaacson, who established the Alzheimer’s Prevention Clinic in 2013. “Having a few FDA approved drugs on the market is marginally helpful, but what about addressing vascular risk factors, lifestyle changes, exercise, nutrition, sleep, and stress management? There is a saying: Once you have seen one person with Alzheimer’s, well, you have seen one person with Alzheimer’s. What this means is that from a clinical perspective, Alzheimer’s is a very heterogeneous disease. I believe that different people can take different roads to Alzheimer’s. Some may have insulin resistance and fast-forward amyloid production. Others may have a genetic link. We need to figure out what road they’re on and get them off that road. I didn’t feel comfortable with a one-size-fits-all approach and started looking deeper, considering genetic variations and the person’s individual biology, in crafting a targeted plan.”

While there is no disease-modifying therapy currently available for treatment, Dr. Isaacson believes combining a variety of evidence-based low-risk interventions along with lifestyle modifications may help to delay, or in some cases, possibly prevent the progression toward dementia. He is not alone in this thinking. Observational studies have shown that modifiable vascular, metabolic, and lifestyle-related factors have been associated with dementia risk. Findings from the 2015 Finnish Geriatric Intervention Study to Prevent Cognitive Impairment and Disability (FINGER), a groundbreaking two-year proof-of-concept randomized controlled trial of over 1,200 people, suggest that a multidomain intervention — diet, exercise, cognitive training, and vascular risk monitoring — could improve or maintain cognitive functioning in at-risk elderly over time.

“These interventions were found to be as effective in individuals who have the most common gene for late-onset Alzheimer’s disease,” notes Dr. Isaacson. “So, not only do we have some control over our destiny, it may even be possible to win the tug-of-war against our genes.”

The Alzheimer’s Prevention Clinic at Weill Cornell focuses on promoting brain health and reducing risk thorough a series of multidisciplinary interventions that target lifestyle behavior modifications. Because Alzheimer’s prevention is a nascent field with a paucity of literature, the Clinic’s methods are being rigorously tested in an ongoing clinical research study. The work of Dr. Isaacson and his team has helped establish that proactively managing Alzheimer’s risk factors is a feasible endeavor, and the Clinic has drawn an increasing number of people who seek to lower their Alzheimer’s risk.

“We are offering a clinical precision medicine approach for normal patients at risk, those with preclinical Alzheimer’s, and those who have mild cognitive impairment due to Alzheimer’s,” says Dr. Isaacson. “Each patient undergoes what we call the ABCs of Alzheimer’s prevention management. A is for anthropometrics, or body composition. B represents blood-based biomarkers related to genetics, lipids, metabolism, inflammation, and nutrition. C stands for cognition. In addition to blood draws, genetic testing, and biometric measurements, patients undergo extensive cognitive assessments. We paint a very fine-tuned picture and reassess these measures every six months. If the initial behavior modifications we recommend are not helping, the multidisciplinary team will suggest alternatives.”

Dr. Isaacson puts his beliefs into practice for himself as well. “Essentially, everything I tell my patients to do in terms of making the right lifestyle choices, I do myself,” he says. “I firmly believe that these changes can reduce my own personal risk, as well as my patients’ risk, while also benefiting overall health.”

Technology also has a major presence in their approach. Clinicians use wrist biosensor devices to measure patients’ exercise frequency and intensity, average pulse rate, maximum pulse rate, as well as REM, deep and total sleep. “Think of it as a Fitbit on steroids,” says Dr. Isaacson, who is conducting a pilot study of the tool with 40 patients aged 25 to 75 years. “We are committed to using technology to facilitate diagnosis, ongoing monitoring, and optimizing personalized therapeutic management.”

The Clinic’s technology team, which includes a bioinformatics neurology fellow and a previous IBM Watson team member who is now developing artificial neural networks for use in the Alzheimer’s Prevention Clinic dataset, has also created mobile phone-based cognitive tests to predict whether patients have the earliest signs of memory loss due to Alzheimer’s. They have collaborated with faculty at Harvard to develop a cognitive assessment that can be done via cell phone, computer, or tablet, that can predict whether amyloid is present in the brain.

“Based on prevailing evidence, one out of three cases of Alzheimer’s disease may be preventable if we do everything right. Even if we can tell a patient ‘we are not 100 percent sure this approach works, but it’s low risk,’ that’s a big step forward,” says Dr. Isaacson. “From the volume of patients we are seeing in our clinic, we have learned that there is definitely a need for this service. And our preliminary evidence — published in a peer-reviewed publication and presented at professional meetings — shows measurable improvements in cognitive function at baseline and at six-month follow-up, as well as improvement in blood biomarkers of Alzheimer’s disease risk. We have been able in the short term to improve brain health. The tricky part is, are we really preventing Alzheimer’s or just improving brain health? That’s where we need to go next.”

Dr. Isaacson and his team have developed a framework for practice for neurologists in the field of Alzheimer’s prevention. Not surprisingly, their model has attracted visiting neurologists from all over the world seeking to replicate it at their own institution, and there are now several prevention clinics in the U.S. and globally that have created, or plan to create, similar programs based on the Weill Cornell approach.

Recognizing the demand for information by patients and practitioners alike, the Alzheimer’s Prevention Clinic team launched an educational website, Alzheimer’s Universe (AlzU.org). The site, which offers an Alzheimer’s prevention education course for patients, as well as a free CME-accredited course on prevention for neurologists and other physicians, has drawn one million visitors since its inception only four years ago.

“In terms of the ‘textbook’ of Alzheimer’s prevention, the first chapter is written and we are making progress on chapter two, but we still have a long way to go,” continues Dr. Isaacson. “We need to define what Alzheimer’s prevention is and isn’t, and legitimize the evidence-based approach to prevention based on science, determining what is and what is not in our control.”

To this end, Dr. Isaacson’s team received NIH funding to undertake brain imaging in women ages 40 to 65 in a first-of-its-kind study aimed at defining the “critical window” for risk reduction. “Once a disease of old age, Alzheimer’s is beginning to be seen by neurologists as a disorder of younger and middle-aged people,” says Dr. Isaacson. “That is how our field is going to survive. We have to prevent the disease, not just treat it.”

Dr. Isaacson’s focus on prevention had its skeptics at first, but it seems like the tide is turning. In fact, the American Academy of Neurology has even applied the term “newrologists” to emphasize the move toward preventative, interventional, and regenerative care efforts, as well as novel therapies.

“In 2018, we can feel more comfortable using Alzheimer’s and prevention in the same sentence because the totality of evidence demonstrates that we can reduce risk,” says Dr. Isaacson.