Predictive Monitoring: Improving Application of Big Data in the NICU 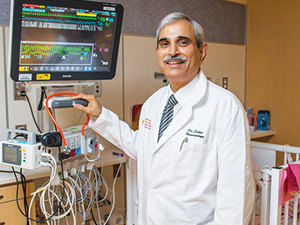 In the intensive care setting, it is vital to assess hemodynamic status for optimization of end-organ tissue oxygenation and to decrease morbidity and mortality. “However, standard hemodynamic monitoring, such as heart rate and systemic blood pressure, may only provide a crude estimation of organ perfusion during neonatal intensive care,” says Rakesh Sahni, MD, Medical Director of the Neonatal Intensive Care Unit at NewYork-Presbyterian Morgan Stanley Children’s Hospital, and Director of the Infant Physiology Laboratory at Columbia University.

“Recent technological advances in digital signal processing have allowed pulse oximetry to potentially fill this gap of monitoring tissue microcirculation,” says Dr. Sahni. In a recent review of continuous noninvasive monitoring in the NICU published in Current Opinion in Pediatrics, Dr. Sahni provides an overview on the clinical use of pulse oximetry as a method for assessing end-organ oxygenation. He concludes that “noninvasive real-time continuous bedside monitoring with pulse oximetry has the potential to serve as a biomarker for early organ dysfunction and to predict adverse short-term and long-term outcomes in critically ill neonates. In the future, a combination of pulse oximetry with other noninvasive modalities, such as near-infrared spectroscopy, electroencephalography, ultrasound, and/or other imaging into single devices will provide comprehensive information of organ health through multimodal monitoring.”

Predictive monitoring is an exciting new field involving analytics of physiological data to detect abnormal patterns associated with critical illness. In 2017, Dr. Sahni collaborated with colleagues at the University of Virginia in a federally funded retrospective study of 1,065 infants to determine how best to use vital signs and other clinical data for preclinical detection of sepsis or necrotizing enterocolitis. “Being able to collaborate with other institutions with the same goal enabled us to pool data equivalent to 131 infant years,” says Dr. Sahni. “One of the aims of our study was to be able to identify early on those infants receiving NICU care who contracted bloodstream infections or necrotizing enterocolitis, which can have catastrophic end results. Every neonatologist would be more than happy to know ahead of time what might be coming.”

The investigators focused on correlating continuous heart rate, breathing, and oxygen saturation data, seeking physiological signatures that could recognize critical illness before it became clinically overt. “We showed that cross-correlation of heart rate and oxygen saturation is altered significantly 24 hours prior to clinical suspicion of sepsis or necrotizing enterocolitis,” says Dr. Sahni. “Thus, the combined cardiorespiratory predictive algorithms may improve monitoring for earlier detection and treatment of potentially catastrophic illness in NICU patients. This growing and exciting science of ‘predictive monitoring,’ driven by the desire to transform the way waveforms are analyzed, will improve the value of monitoring and thus improve quality and efficiency of care.”

Dr. Sahni and his colleagues have begun to apply this information to the NICU at NewYork-Presbyterian Morgan Stanley Children’s Hospital. “We are now looking at various neonatal morbidities, such as retinopathy of prematurity, bronchopulmonary dysplasia, and intraventricular hemorrhage, retrospectively to determine if there were earlier physiological signatures that could predict these long-term problems,” says Dr. Sahni, who believes the answer lies in big data analytics and machine learning, i.e. being able to construct algorithms and make predictions based on data. “At Columbia, because we take care of such sick patients, we have the data to develop these algorithms. We have begun working with the Department of Informatics at Columbia, and our group includes neonatologists, an epidemiologist, a physicist, and a computer engineer. Continuing with our collaborators at University of Virginia, including their mathematicians, we can develop and bring the algorithms to the bedside for improving outcomes of ICU patients through early detection and prompt treatment of acute potentially catastrophic illnesses.”