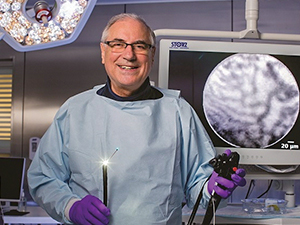 As David L. Carr-Locke, MD, sees it, the achievement that made international headlines — the identification of a previously unknown anatomical structure in the human body — harkens back to the medical discoveries of centuries past. “You’d think we had run out of things like that, because everything has been described,” says Dr. Carr-Locke, Clinical Director of the Center for Advanced Digestive Care at NewYork-Presbyterian/Weill Cornell Medical Center and Professor of Medicine at Weill Cornell Medicine. “And yet that’s how it came about— by observing a clinical phenomenon in a new way.”

The discovery that brought Dr. Carr-Locke and his colleagues to worldwide attention is something they dubbed the “interstitium” and described in a paper published in Nature: Scientific Reports in March 2018. In the words of the The New York Times, which featured the research in its health section, the interstitium is a “fluid-filled, 3-D latticework of collagen and elastin connective tissue that can be found all over the body.” And what’s more — as some news outlets enthused, to the researchers’ chagrin — the structure could potentially be considered something even more remarkable: a previously unidentified organ.

“We’re not saying that; the press did,” stresses Dr. Carr-Locke, a native of the United Kingdom. But then again, he admits, “it’s not so crazy. You have to decide, what is the definition of an organ? If you define an organ as something that’s recognizable as a structure and has a function of some sort, then it probably fulfills those criteria. That’s why we haven’t said, ‘No, you can’t call it that.’ It’s a nice idea.”

"The reason the interstitium hadn’t been seen before is that when you take a specimen or biopsy and fix it in formalin, it takes all the water out, so the spaces disappear."

The work that led to the identification of the interstitium has its roots in the mid-aughts, when , then at Beth Israel Medical Center, and colleagues began using a new piece of diagnostic equipment: a powerful, miniaturized microscope that works with an endoscope. Observing the bile duct in a live patient, he says, “We saw a pattern, a network of black wiggly lines with white spaces in between.” Years later, they set about identifying what those structures were. With patient consent during related procedures, they took small biopsies of the bile duct, and rather than fixing them in the preservative formalin, they froze them.

“The reason the interstitium hadn’t been seen before is that when you take a specimen or biopsy and fix it in formalin, it takes all the water out, so the spaces disappear,” he explains. “In all the textbooks, that’s what you see: a band of stuff, mostly collagen, underneath the surface, that has no spaces.”

Further study revealed that the black lines were indeed collagen, and the spaces in between were filled with something akin to lymphatic fluid. They wondered if it could be found in other parts of the body, and the answer was a resounding yes. They identified interstitium in the pancreas, duodenum, stomach, intestine, bladder, skin, lungs, and more. “Everywhere there was a lining to something, it seemed to be there,” he says. “We called it the interstitium because it’s between things — a layer between the surface and something deeper.”

Organ or not, Dr. Carr-Locke says, the interstitium could have implications for a wide variety of diseases and conditions, including how cancer spreads, what triggers some aspects of Crohn’s disease, and how scars form after injury. Now, he and his collaborators are deciding on their next steps in exploring its specific composition and its role in the human body. “It could explain a lot of phenomena; it may be that when things are diseased, the interstitium gets interrupted or interfered with,” he says. “It really is everywhere. It’s real. It’s reproducible. And once you know it’s there, you see it all the time.”