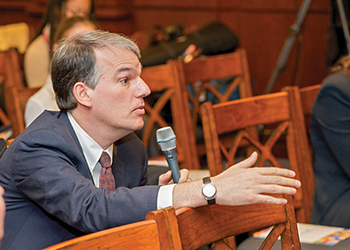 Survivors of opioid overdose are at great risk of dying in the year after overdose, but the deaths are not always caused by drug use, according to Mark Olfson, MD, MPH, Professor of Epidemiology at Columbia University’s Mailman School of Public Health, and lead author on the first study to evaluate causes of death in opioid overdose survivors, recently published in JAMA Psychiatry. In addition to succumbing to drug use, the Columbia investigators found that survivors were much more likely to die from respiratory diseases, viral hepatitis, and suicide.

“We found that adults who survive an opioid overdose have an exceptionally high risk of dying from a wide range of medical diseases and suicide,” says Dr. Olfson, Professor of Psychiatry at Columbia University Vagelos College of Physicians and Surgeons. “While it was not surprising that adults who survive opioid overdoses have high ongoing risks of drug-related death and dying from HIV or viral hepatitis, I was taken aback by their markedly elevated risks of dying from so many other conditions, including circulatory, respiratory, and digestive system diseases. These findings underscore the overall medical frailty of this patient population and show us that instead of just focusing on survivors’ drug use, we need to coordinate addiction treatment for survivors with general medical and mental health care.”

The researchers analyzed Medicaid records from 45 states to look for causes of death in more than 75,000 adults who were treated for an opioid overdose between 2001 and 2007. More than 5,000 of the adults died within the first year following an overdose — 24 times the death rate found in the general population. The most common causes of death were those related to drug use (25 percent), diseases of the circulatory system (13 percent), and cancer (10 percent). The data show that adults in this population are substantially more likely to die of these causes than adults in the general population.

“Some of the mortality in this group likely reflects health risk factors that are common in individuals with opioid use disorders, such as cigarette smoking, which can lead to respiratory diseases, cardiovascular disease, and cancer, and needle sharing, which can lead to hepatitis and HIV,” says Dr. Olfson.

Opioid use has greatly increased in all sectors of society since the data were collected. “Given the substantial and diverse mortality risks following opioid overdose, it’s critically important that clinicians coordinate addiction treatment, general medical care, and mental health care in individuals with opioid use disorders,” adds Dr. Olfson.