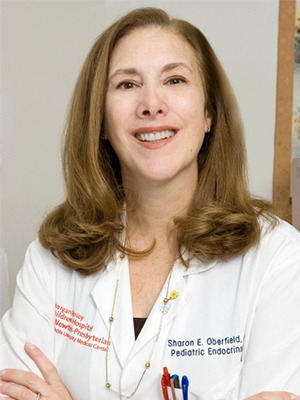 Polycystic ovary syndrome (PCOS) is among the most common causes of female infertility affecting as many as five million women of reproductive age in the United States. But this hormonal disorder, the exact cause for which remains unknown, also puts women at risk for a wide range of health problems. PCOS is a particular clinical and research focus of Sharon E. Oberfield, MD, Chief of the Division of Pediatric Endocrinology, Diabetes, and Metabolism, and Aviva B. Sopher, MD, MS, a pediatric endocrinologist at NewYork-Presbyterian/Columbia University Irving Medical Center. Dr. Oberfield is also Professor of Pediatrics and Dr. Sopher is Assistant Professor of Pediatrics at Columbia University Vagelos College of Physicians and Surgeons.

Throughout her career, Dr. Oberfield, who is President-elect of the Pediatric Endocrine Society, has been engaged in patient-oriented research with a concentration on disorders of adrenal hormone synthesis, adrenarche, and PCOS. She has helped establish guidelines for diagnosis and treatment of PCOS and improve understanding of the array of treatment options. Dr. Oberfield and Dr. Sopher are also members of the Society’s PCOS Special Interest Group, a forum of pediatric endocrinologists who disseminate recommendations on medical management, support research initiatives, provide educational resources for patients and physicians, and advocate for improved models of care delivery.

Discerning the causes of PCOS, particularly in adolescents, piqued the interest of Dr. Sopher while serving as a research assistant involved in studies of body composition and girls with premature adrenarche in the Obesity Research Center (formerly Body Composition Unit) at Columbia. An article by Dr. Sopher published in the Journal of Clinical Endocrinology and Metabolism described how girls with premature adrenarche, many of whom later develop PCOS as adolescents, had a higher bone density than control subjects. 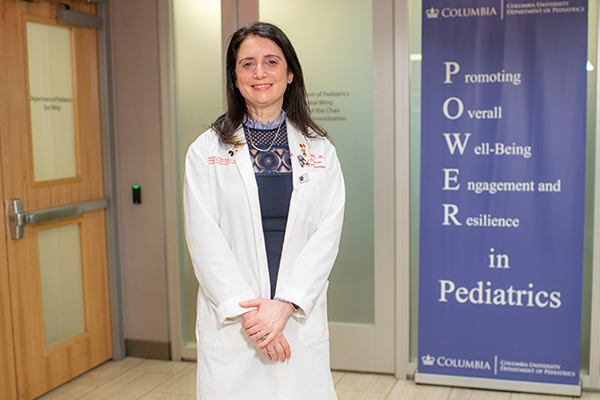 In a study published in Hormone Research in Paediatrics, Dr. Oberfield, Dr. Sopher, and colleagues at other centers sought to determine whether bone mineral density differed between young females with PCOS and those without the condition and to identify factors that influence BMD in this population. They found that obesity status and insulin resistance, but not PCOS status, were each independently associated with bone mineral density in adolescents and young women who spanned a wide range of BMIs.

“I subsequently became interested in understanding the role of body composition in PCOS,” notes Dr. Sopher. “There is a large population of adolescent girls and adults who are actually very thin or of normal weight who have all the symptoms of PCOS. I decided to look at body composition without the confounding effects of obesity such as insulin resistance, dyslipidemia, and fatty liver disease. Those are all issues that are described in PCOS and are seen in adolescent girls who are not obese with PCOS.”

Dr. Sopher shifted her focus to ectopic fat deposition in PCOS. “Generally, we think of fat in the stomach area, buttocks, or the thighs. But ectopic fat deposition is the storage of excess lipids in metabolic organs such as liver and muscle,” explains Dr. Sopher. “We developed magnetic resonance spectroscopy and MRI protocols to determine how much fat was both in the muscles and in the liver and found that non-obese adolescent and young adults with PCOS did have higher liver fat depositions in a study published in Fertility and Sterility in 2012. That was concerning because non-alcoholic fatty liver disease can potentially lead to cirrhosis, long-term liver disease, and even liver failure.”

A Dilemma in Diagnosis

The classic understanding of PCOS refers to a cluster of symptoms in women that includes hirsutism, anovulation, and obesity. Higher than normal androgen levels can prevent ovulation during each menstrual cycle and can cause extra hair growth and acne as well. Many women with PCOS have insulin resistance, especially those who are overweight or obese, do not get enough physical activity, and have a family history of diabetes.

Dr. Oberfield believes that making a diagnosis too early may lead to young women developing anxiety, depression, and body image issues. “We like to use the words, ‘at risk,’” she says. “The key issue of looking at these girls is sometimes with early screening you can do early intervention. You don’t have to label to treat.”

In the August 2019 issue of Current Opinion in Pediatrics, Dr. Oberfield and her colleagues note that the diagnosis of PCOS in adolescents should be primarily based on clinical and biochemical signs of hyperandrogenism and presentation with irregular menses. “Because of the similarity of normal adolescent development and presentation of PCOS, a diagnosis should be deferred until at least two years following menarche,” says Dr. Oberfield, who has published widely on the diagnosis and treatment of PCOS. “For girls who do not fulfill the diagnostic criteria, the focus should be on treatment of symptoms.”

Dr. Sopher agrees. “PCOS is difficult to diagnose in adolescents because healthy adolescents who do not have PCOS generally can have irregular menstrual cycles for two to three years after menarche. While that’s a distinguishing feature of PCOS, irregular periods are also a normal part of adolescence. Acne, also seen in adolescence, can be a factor in PCOS as it is a sign of excessive androgen release. And while PCOS is known for an excess of body hair, adolescents who don’t have PCOS can produce an abundance of hair. All of these reasons can make it difficult to establish a PCOS diagnosis.”

With the foundation that polycystic ovary syndrome is a disease of multiple follicles in the ovaries, Dr. Sopher has been looking at the biomarker anti-Mullerian hormone (AMH), which reflects the follicle formation in the ovaries. In her early exploratory research published in the Journal of Pediatric Endocrinology and Metabolism in 2014, Dr. Sopher found that girls with PCOS had a higher AMH or anti- Mullerian hormone. In addition to continuing her research into AMH, she is investigating the use of MRI to image the ovaries of adolescents to identify if there are distinguishing features that can facilitate a diagnosis of PCOS with the least invasive means possible.

While some adolescents will ultimately develop polycystic ovaries, Dr. Oberfield maintains that the priority should be to determine that there are no other underlying medical problems causing the excess androgens and to help them understand what’s going on in their bodies. “Managing both those at risk for PCOS and those with a confirmed PCOS diagnosis includes education, healthy lifestyle recommendations, and therapeutic interventions targeting symptoms,” she says. “These can include metformin, combined oral contraceptive pills, spironolactone, and specific treatments for hirsutism and acne. In addition to determining  other comorbidities, management should also include follow-up visits and a plan to transition patients to adult care providers.”