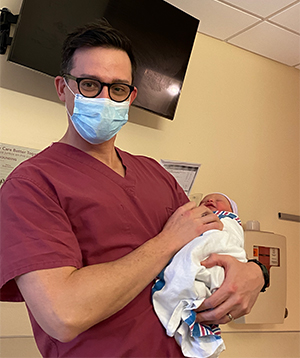 Critically-ill, preterm infants with rare, genetic diseases are a notoriously difficult group to diagnose. Genome-wide testing during the newborn period may have a profound impact on clinical decision-making, which may make all the difference for a family with a sick baby.

Physician-scientist Thomas Hays, MD, PhD,a neonatologist at NewYork-Presbyterian/Columbia University Irving Medical Center and a recipient of the Thrasher Research Fund Early Career Award, has his sights set on uncovering the genetic causes of illnesses among newborns in the neonatal intensive care unit (NICU).

“Infants who are born prematurely at a very low birth weight [VLBW] suffer tremendously. About half will experience severe illness or death, but because these diseases present non-specifically, they are super variable,” says Dr. Hays who noted the difficulty in talking with parents about a child’s prognosis when outcomes are so variable.

“As a field, we really don’t know how to predict which babies are at highest risk because there are highly variable diseases that affect preterm infants.”

“The NICU at NewYork-Presbyterian Morgan Stanley Children's Hospital is by far the biggest in the in tri-state region. Our one-of-a-kind infant cardiac unit cares for the sickest and most complex babies who are very likely harboring rare genetic disorders.” — Dr. Thomas Hays

With his research award, Dr. Hays is conducting a prospective, observational study examining the clinical utility of genome-wide sequencing in 210 preterm VLBW infants weighing <1500 g who are admitted to the NICU at NewYork-Presbyterian Morgan Stanley Children’s Hospital. Genome-wide sequencing will be performed on each of the 210 infants and their parents. Findings will be analyzed to diagnose Mendelian disease, assess for novel expanded phenotypes, and possibly discover new disease-causing genes in this population.

Additionally, the researchers will track the incidence of severe illness or death during the study period in order to detect associations between genetic disease and adverse outcomes. Plans for future studies include following this cohort prospectively as they age—obtaining neurodevelopment data and long-term outcomes.

“The NICU at NewYork-Presbyterian Morgan Stanley Children's Hospital is by far the biggest in the tristate region. Our one-of-a-kind infant heart unit cares for the sickest and most complex babies who are very likely harboring rare genetic disorders,” says Dr. Hays who noted that these infants can often present nonspecifically with respiratory failure.

In another project, Dr. Hays is collaborating with his mentor Ali Gharavi, MD, Chief of Nephrology at NewYork-Presbyterian/Columbia, to conduct whole exome sequencing on babies in the NICU who are born with congenital kidney anomalies. The study, which has almost completed recruitment, seeks to understand how often genetic disorders account for renal malformations and the broader implications for genetic kidney disease. The Thrasher Early Career Award builds off of this project.

In a retrospective review, Drs. Hays and Gharavi found that 22% of VLBW infants had at least one congenital anomaly with a 7-fold increased risk for death or severe illness, after controlling for confounding factors.

“Often genetic kidney disease will go along with neurodevelopmental disorders, so if we can make a diagnosis early in life, it can make a big difference,” says Dr. Hays.

Because genes are expressed in different tissues and at different developmental stages, physician-scientists at NewYork-Presbyterian are also focused on regulation of the genome in the developing brain of babies and children. Researchers see immense potential for genetic medicine to improve diagnosis and treatment in babies and children.

“We have a really robust neurodevelopmental clinic where we can provide follow-up care, tailored support, and combine it with research and genetic tools,” says Dr. Hays, who is grateful for the opportunity to collaborate with research giants like Wendy Chung, MD, PhD, David Goldstein, MD, and his mentor Dr. Gharavi and co-mentors Anna Penn, MD, PhD, Chief of Neonatology at NewYork-Presbyterian/Columbia, and Ronald Wapner, MD, Vice Chair of Research in Obstetrics and Director of Reproductive Genetics at NewYork-Presbyterian/Columbia.

From Bench to Bedside

Dividing his time caring for patients and conducting research, Dr. Hays acknowledges the challenges, but wouldn’t have it any other way.

“There are challenges to starting your career as a physician-scientist when NIH funding is flat and most R01 grants go to full professors. I am so grateful for this award to help me work toward that,” says Dr. Hays.

Having a precise genetic diagnosis allows for more informed decision-making and changes in clinical management, which helps neonatologists to anticipate and prevent severe illness in preterm infants.

“Patient care always comes first and I am invested in these families. We text regularly and they keep me updated,” says Dr. Hays. “By having a genetic diagnosis, we can provide better counseling to parents to facilitate the redirection of care, provide medical or surgical therapy, or test other family members where we might find a cousin who is having trouble in school and has an undiagnosed genetic disorder,” says Dr. Hays.

By harnessing the power of genomic medicine to uncover the genetic causes of illnesses in newborns, doctors at NewYork-Presbyterian are helping inform the clinical utility of broad genome-wide testing for all preterm infants. Findings are also helping to inform discussions around the cost-effectiveness of tools like rapid genome sequencing, which offers many benefits but has a higher price tag.

“Insurance will reimburse the cost of genetic testing for autism or neurodevelopment disorders for example, but not for preterm infants or children with kidney disease despite evidence showing a genetic link. Our research will help demonstrate who will benefit from [genome-wide sequencing] in this population,” says Dr. Hays.

Drs. Hays and Gharavi believe the future of genomics is bright, anticipating the need for genetic cardiologists and nephrologists who are trained in precision medicine. “We are able to make a diagnosis relatively quickly, avoid unnecessary care, and are carrying out terrific research,” says Dr. Hays.