Battling Neonatal Infections Bedside and in the Lab 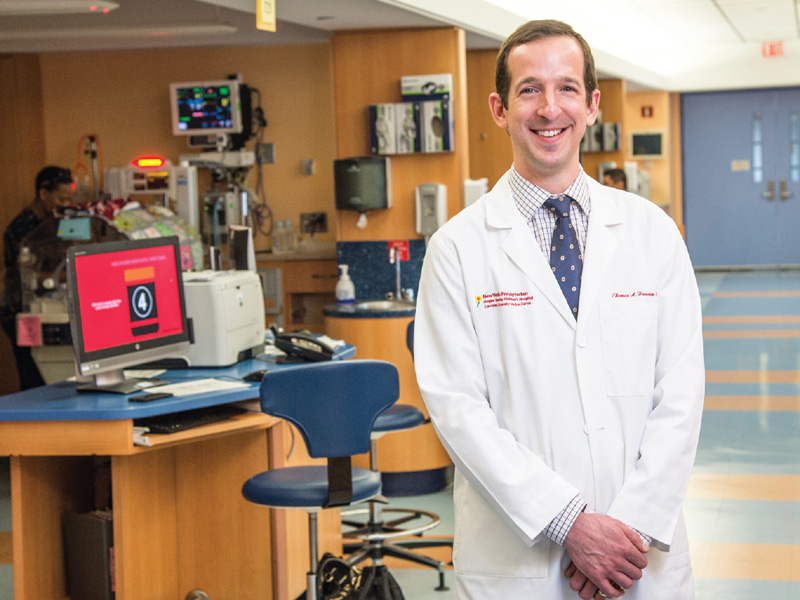 When Thomas A. Hooven, MD, is not saving young lives in the Neonatal Intensive Care Unit at NewYork-Presbyterian Morgan Stanley Children’s Hospital, he is in the lab seeking ways to prevent their harm from a devastating infection – group B Streptococcus (GBS).

“Treatment of infection is a major part of my work, because babies, particularly preterm or other sick infants, are very susceptible to infections that generally do not affect healthy children and adults outside of the neonatal period,” says Dr. Hooven, a neonatologist in the Division of Neonatology and Perinatology, whose research focuses on using advanced genomic analyses to identify new drug or vaccine targets in an effort to eradicate neonatal GBS infections.

“GBS is a common adult intestinal and vaginal commensal that also causes neonatal sepsis, pneumonia, and meningitis,” says Dr. Hooven, who began his basic science research in infectious disease as a resident in pediatrics and then as a fellow in neonatology at Columbia. “GBS affects about 3,000 babies a year and is the leading cause of infectious neonatal mortality in the United States.”

According to Dr. Hooven, over the last 20 to 30 years, the accepted approach to preventing GBS has been to screen women between the 35th and 37th week of pregnancy. If they carry the bacteria on their skin or in the birth canal, they are given broad-spectrum antibiotics at the time of delivery. “From a public health standpoint, this is an effective way of limiting neonatal risk from group B strep, but there are definitely drawbacks in giving a million courses of antibiotics to women who are delivering babies every year,” he says. “In the last five to 10 years, we’ve learned an enormous amount about the significance of the microbiome and healthy bacteria, which are important during the neonatal period. These babies whose moms are treated with antibiotics basically have their microbiome wiped out the moment they set foot on the planet.”

What Dr. Hooven sees as a more targeted way to prevent serious bacterial infections is to develop a vaccine. “In order to develop a vaccine you need to know what target you’re going after. So my research, in broad strokes, has been to use next-generation sequencing, bioinformatics, and computational approaches to understand how the bacteria manages to cause these infections, what genes are in the bacterial genome, and what proteins on the bacterial surface are needed for the bacteria to invade a newborn baby and cause these serious infections. I believe a protein product of those genes is likely to be the best target for new vaccine development.”

With funding from a four-year National Institutes of Health grant, Dr. Hooven’s research is focusing on genes and gene networks that enable GBS to successfully colonize the maternal reproductive tract and to survive in amniotic fluid and blood during perinatal infection. Using a novel genome-wide screening technique based on next-generation sequencing of transposon-genome junctions from a saturated mutant library (Tn-seq), Dr. Hooven can accurately predict which GBS genes have the protein products necessary for bacterial growth under diverse experimental conditions. He is now using Tn-seq technology – in combination with ex vivo and in vivo models of colonization and invasion – to pinpoint these surface-localized GBS proteins whose functions are essential for pathogenesis. Once validated by targeted knock- out mouse models and antibody coincubation experiments, those proteins identified as essential for pathogenesis will be purified and tested as candidate vaccines to prevent vaginal colonization, ascending chorioamnionitis, and early-onset sepsis in clinically relevant mouse models.

“The Tn-seq technology enables us to look at what GBS does in human blood, in human amniotic fluid, and in models of infection during late pregnancy in mice, and that has given us very large and interesting data sets of potential targets that are likely needed for GBS survival in each of those environments,” says Dr. Hooven. “The blood and amniotic fluid are particularly important models given that they provide environments in which fetal and early neonatal infection thrive.”

“There are still many steps between making a discovery in mice and translating it to the patient setting,” continues Dr. Hooven, “but we think we’re on the right path and we are learning a lot about group B strep infection pathogenesis mechanisms as we go. When making small discoveries along the way, we never know which one of those discoveries is going to open up a whole new paradigm.”

While his investigations center on group B strep for now, Dr. Hooven believes that his work is transferable to the study of other organisms and diseases. “In some ways the pendulum is swinging back to an interest in vaccine prevention and development for neonatal protection,” says Dr. Hooven. “When I’m in the NICU, it’s about saving one baby at a time. In the lab, I see that effort as amplified across the four million babies born in America each year – and someday all the babies in the world – to try to give them the best start possible and the best hope for a long and healthy life.”