NewYork-Presbyterian is recognized as an international leader in autism spectrum disorder, and specialists here continue to make inroads in the field. At the foundation of their progress is the Center for Autism and the Developing Brain (CADB), a collaborative program among NewYork-Presbyterian, Weill Cornell Medicine, and Columbia University Vagelos College of Physicians and Surgeons. As part of its research mission, Jeremy Veenstra-VanderWeele, MD, Director of the Division of Child and Adolescent Psychiatry at NewYork-Presbyterian Morgan Stanley Children’s Hospital and Columbia, established the CADB Medicine Research Program, which is dedicated to translating scientific findings into novel treatments for children and adults with ASD and related genetic syndromes.

As a practicing child and adolescent psychiatrist, Dr. Veenstra-VanderWeele has focused some of his work on two major issues that affect his patients – use of unproven medications and providing needed mental health care to patients with autism and co-occurring disorders. 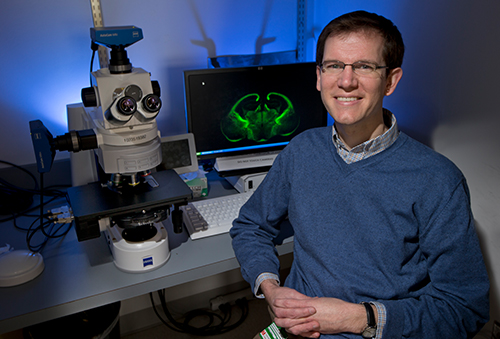 The Need for Verifying Treatments

While pharmacological treatments are available to treat agitation in autism, medications to address core areas of difficulty are lacking, leaving families susceptible to trying remedies that are not grounded in scientific evidence.

“Fad treatments are very common. Before using new treatments in the clinic, we need to make sure they are safe and effective,” says Dr. Veenstra-VanderWeele, who recently served as an investigator on a phase 2 multicenter study evaluating intranasal oxytocin, considered a “pro-social” hormone based on animal studies, as a potentially promising therapy to reduce social difficulties associated with ASD.

The placebo-controlled, 24-week trial involved 290 children and adolescents with ASD, ages 3 to 17 years old, stratified according to age and verbal fluency; 146 participants received intranasal oxytocin and 144 received a matching intranasal placebo. Study findings, which were published in the October 14, 2021, issue of The New England Journal of Medicine, demonstrated:

“Our paper shows the danger of using unproven treatments before they are fully tested,” says Dr. Veenstra-VanderWeele. “Intranasal oxytocin has been taken by tens of thousands of children in this country. The results emphasize the need to conduct rigorous studies before therapies go into broad use.”

Targeted drug development for autism spectrum disorder has long posed a significant challenge. So great is this challenge that in 2017, the International Society for CNS Clinical Trials and Methodology (ISCTM) joined with the European College of Neuropsychopharmacology to create the ASD Working Group with the charge of identifying barriers to progress and recommending research strategies for the field to gain traction. In the July 2021 issue of European Neuropsychopharmacology, Dr. Veenstra-VanderWeele and colleagues in the ASD Working Group provided an in-depth review of the barriers that continue to impede drug development, the current state of trials for potential treatments, and what is on the horizon for novel biomedical interventions.

Dr. Veenstra-Vanderweele and his colleagues at NewYork-Presbyterian have multiple treatment studies underway examining therapies that might improve the social function and repetitive behavior symptoms of ASD. Through the CADB Medicine Research Program, Dr. Veenstra-VanderWeele is currently enrolling participants in the multicenter Envision study, a phase 2 clinical trial evaluating another potential medication targeting social communication problems and repetitive behaviors in adolescents and adults with ASD. The medication, JNJ-42165279, targets the endocannabinoid system, which plays important roles in central nervous system development, synaptic plasticity, and the response to endogenous and environmental insults.

“We are also studying the potential for treatment of genetic conditions that lead to ASD, including studies in young children with Fragile X Syndrome and in children and adolescents with 16p11.2 deletion syndrome,” says Dr. Veenstra-VanderWeele, who serves as the principal investigator at Columbia for both studies.

In the Veenstra-VanderWeele laboratory at Columbia, researchers are evaluating whether specific proteins push animals to behave more or less flexibly. “If we find that something is important for behavioral flexibility, then we can develop an approach that targets neurobiology without being focused on a particular genetic syndrome,” says Dr. Veenstra-Vanderweele. “Our ultimate goal is to develop an approach that has the potential to help children with autism to learn more flexibly.”

ASD and the Presence of Co-Occurring Disorders

A diagnosis of autism is often accompanied by other conditions such as attention deficit hyperactivity disorder, anxiety, depression, or obsessive compulsive disorder, as well as less common conditions such as schizophrenia and bipolar disorder. Manifestations of these concurrent conditions may sometimes be obscured by symptoms attributed to ASD, a phenomenon often termed “diagnostic overshadowing.”

“Data suggest that 70 percent of people with autism also have at least one co-occurring mental illness,” says Dr. Veenstra-VanderWeele. “As a field, we are not providing adequate mental health care to people with autism who also have other developmental or psychiatric conditions. We need to prioritize mental health care in this population and recognize that there is substantial need for services.”

The Whitaker Scholar Program in Developmental Neuropsychiatry at Columbia provides support and mentorship to child psychiatrists and other professionals who seek to better understand and address the historically underserved mental health needs of persons with developmental disabilities. The first of its kind in the nation, the Scholar program, launched in 2011, offers one to three years of highly individualized training and mentorship, including training at the Center for Autism and the Developing Brain.

“This is the most prominent program in the nation for child and adolescent psychiatrists specializing in the treatment of children with developmental disabilities and autism,” says Dr. Veenstra-VanderWeele, who co-directs the Whitaker Scholar Program with Agnes Whitaker, MD, a child and adolescent psychiatrist with NewYork-Presbyterian/Columbia who specializes in autism and other developmental disorders.